Preclinical studies have shown that exposure of the developing brain to inhalational anesthetics can cause neurotoxicity. However, other studies have claimed that anesthetics can exert neuroprotective effects. We investigated the mechanisms associated with the neurotoxic and neuroprotective effects exerted by inhalational anesthetics. Neuroblastoma cells were exposed to sevoflurane and then cultured in 1% oxygen. We evaluated the expression of proteins related to the unfolded protein response (UPR). Next, we exposed adult mice in which binding immunoglobulin protein (BiP) had been mutated, and wild-type mice, to sevoflurane, and evaluated their cognitive function. We compared our results to those from our previous study in which mice were exposed to sevoflurane at the fetal stage. Pre-exposure to sevoflurane reduced the expression of CHOP in neuroblastoma cells exposed to hypoxia. Anesthetic pre-exposure also significantly improved the cognitive function of adult wild-type mice, but not the mutant mice. In contrast, mice exposed to anesthetics during the fetal stage showed cognitive impairment. Our data indicate that exposure to inhalational anesthetics causes endoplasmic reticulum (ER) stress, and subsequently leads to an adaptive response, the UPR. This response may enhance the capacity of cells to adapt to injuries and improve neuronal function in adult mice, but not in developing mice.
Keywords: anesthetics; chaperone; endoplasmic reticulum; ER stress; KDEL receptor; unfolded protein response; neuroprotection; neurotoxicity anesthetics; chaperone; endoplasmic reticulum; ER stress; KDEL receptor; unfolded protein response; neuroprotection; neurotoxicity

In order to investigate whether inhalational anesthetics influence the function of the ER at the cellular level, we exposed a mouse neuroblastoma cell line, neuro2a, to sevoflurane. Neuro2a cells were cultured at 37 °C in an atmosphere containing 21% O2 and 5% CO2. Neuro2a cells were then exposed to 3% sevoflurane for 2.5 h, 5 h, or 7 h. Subsequently, cells were collected and analyzed by western blotting for protein expression related to the UPR (Figure 1). We found that exposure to sevoflurane caused an increase in the expression of cleaved ATF6α, thus indicating that the UPR had been initiated. The expression of XBP1 and BiP was observed even under the control condition, but their expression levels increased as the length of exposure to sevoflurane increased. CHOP, a transcription factor that is expressed in response to ER stress and induces cell death [47,48], was expressed at very low levels under the control conditions, but was expressed at higher levels in cells exposed to sevoflurane. A significant increase in the expression of CHOP was observed at 7.5 h. These results suggested that sevoflurane affected cells and inhibited the protein folding of nascent proteins in the ER, thus inducing the UPR. Subsequently, the UPR enhanced the expression of cytoprotective ER chaperones, such as BiP, but also induced the expression of CHOP, thus resulting in cell death under conditions in which the ER is seriously stressed.

Next, we investigated the effects of inhalational anesthetics on the developing mouse brain in vivo. Since the exposure of neonatal mice to inhalational anesthetics could suppress their respiration and circulation, possibly resulting in hypoxia and low blood flow, we exposed pregnant mice to sevoflurane 2 days before delivery. Female wild-type mice were mated with male heterozygous mutant Bip mice. On day 17.5 of gestation, pregnant mice were exposed to 3% sevoflurane for 3 h under 40% O2. During exposure, we measured body temperature, blood pressure in the tail, blood flow in the tail, and percutaneous oxygen saturation. Overall, we observed a reduction in blood pressure, although blood flow and SpO2 did not decrease. The newborns showed a ratio of 1:1 (wild-type:heterozygous mutant Bip mice) and were raised by the parent mice. At 10 weeks of age, we evaluated their cognitive function [35]. Radial maze testing is widely used as a spatial cognitive function test in mice [49]. Testing was performed for 5 consecutive days, during which learning effects (shorter completion time and higher correct answer rate) were observed in individual mice. Radial maze testing at 10 weeks revealed that both wild-type mice, and the heterozygous mutant Bip mice, exposed to anesthetic, had a significantly longer completion time (p < 0.01), and a lower correct answer rate (p < 0.05), compared with unexposed mice (Figure 2, Supplementary Materials S1).

2.3. Moderate Exposure to Anesthetics Causes Cytoprotective Effects through the UPR

2.4. Pre-Exposure to Sevoflurane Improves Cognitive Function in Adult Wild-Type Mice, but not in Bip Mutant Mice

Finally, we evaluated the effect of inhalational anesthetics on the cognitive function of adult mice. One-year old wild-type, and heterozygous Bip mutant mice, were exposed to 3% sevoflurane for 3 h in an atmosphere containing 40% O2. A radial maze test was then carried out each day from the 7th day after exposure, for a total period of 5 days. There was no significant difference in terms of cognitive function when compared between the unexposed wild-type and the mutant Bip mice, whereas the wild-type mice exposed to sevoflurane were associated with a significantly higher rate of correct answers when compared with unexposed Bip mutant mice (p < 0.05). In addition, the wild-type mice exposed to sevoflurane showed a significantly shorter completion time when compared with the unexposed wild-type mice (p < 0.05). Pre-exposure to inhalational anesthetics significantly improved cognitive function in the wild-type mice, while no such effect was evident in the Bip mutant mice (Figure 4, Supplementary Materials S3).
These results suggest that exposure to inhalational anesthetics may confer neurotoxic effects, thus inducing adaptive responses of UPR. The UPR enhances the capacity of cells, and individuals, to tolerate such insults. This scenario applies to healthy wild-type individuals, but not sensitive individuals, such as neonates with developing neuronal cells, and aged individuals with degenerative neuronal cells (Figure 2 and Figure 4).

This study was carried out in accordance with the recommendations of the guidelines for animal experiments of Chiba University. The protocol (30–132) was approved by the Institutional Animal Care Committee of Chiba University, Chiba, Japan. The generation of the knock-in mouse, expressing a mutant form of BiP that lacked the carboxyl-terminal KDEL sequence, was described previously [45]. The missing KDEL sequence was replaced with a hemagglutinin (HA) tag. The heterozygous Bip mutant male mice (Bm/+) were mated with wild-type (C57BL/6, +/+) female mice, and offspring (wild-type and heterozygous mutant) were bred for use in experiments.

Mice were subjected to the eight-arm radial maze test 7 days after being exposed to sevoflurane, as previously described [35]. The completion time (in seconds) was defined as the total time taken by each mouse to eat all of the food in the eight arms of the maze. Attempts to enter arms without bait were counted as errors, while attempts to enter arms with food were counted as successes. The correct answer rate was defined as the ratio of successful attempts to the overall number of attempts (0.0–1.0). Testing was carried out daily for 5 days (Supplementary Materials S3, Figure 4). Data related to fetal sevoflurane exposure were extracted from DATASET S1 and DATASET S2, as described in our previous study (Supplementary Materials S1, Figure 2) [35].

The results of the radial maze test are shown as means + standard error of the mean (SEM). Repeated measures analyses of variance (ANOVA), followed by Bonferroni multiple comparison tests, were then performed to compare values between groups (GraphPad Prism 4.0, GraphPad Software, San Diego, CA, USA). Statistical significance was accepted at p < 0.05. Densitometry was carried out for the CHOP images and resultant data analyzed by one-way ANOVA, followed by Dunnett’s multiple comparison test. 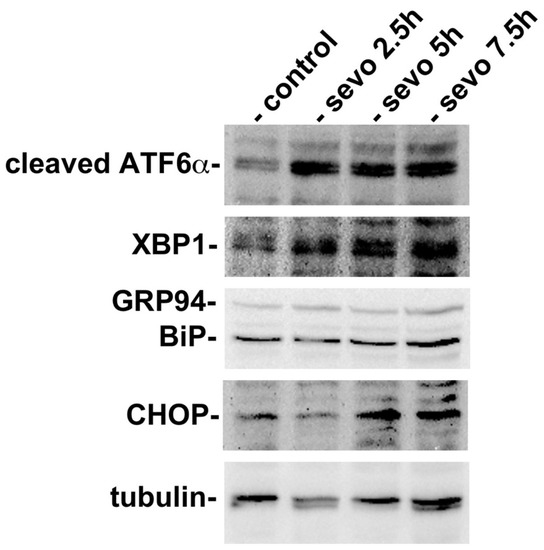 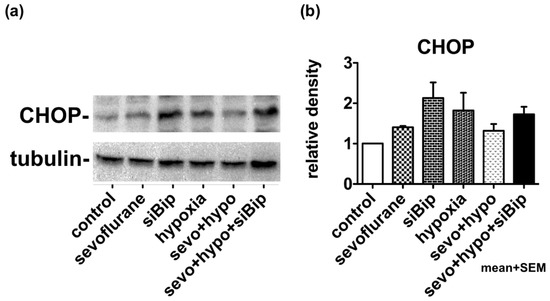 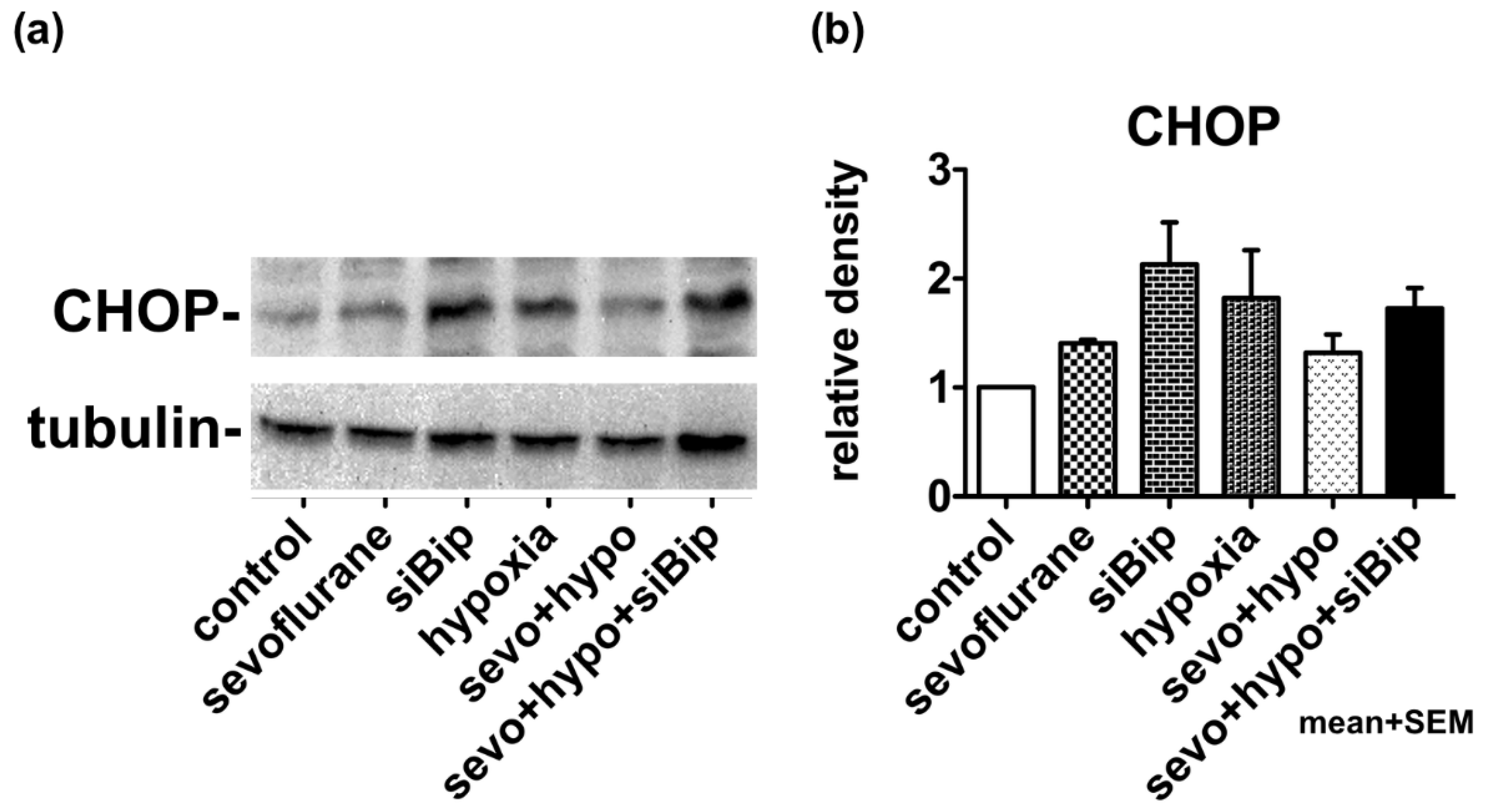