Cell Cycle and DNA Repair Regulation in the Damage Response: Protein Phosphatases Take Over the Reins

SBP-box (Squamosa-promoter binding protein) genes are a type of plant-specific transcription factor and play important roles in plant growth, signal transduction, and stress response. However, little is known about the role of pepper SBP-box transcription factor genes in response to abiotic stress. Here, one of the pepper SBP-box gene, CaSBP12, was selected and isolated from pepper genome database in our previous study. The CaSBP12 gene was induced under salt stress. Silencing the CaSBP12 gene enhanced pepper plant tolerance to salt stress. The accumulation of reactive oxygen species (ROS) of the detached leaves of CaSBP12-silenced plants was significantly lower than that of control plants. Besides, the Na+, malondialdehyde content, and conductivity were significantly increased in control plants than that in the CaSBP12-silenced plants. In addition, the CaSBP12 over-expressed Nicotiana benthamiana plants were more susceptible to salt stress with higher damage severity index percentage and accumulation of ROS as compared to the wild-type. These results indicated that CaSBP12 negatively regulates salt stress tolerance in pepper may relate to ROS signaling cascades.
Keywords: pepper; CaSBP12; salt stress; reactive oxygen species; Nicotiana benthamiana pepper; CaSBP12; salt stress; reactive oxygen species; Nicotiana benthamiana

Plants frequently encounter stressful environmental conditions, such as high salinity, extreme temperatures, drought, pests, and fungus infection [1]. These leading to detrimental effects on plant growth and seed germination and fruit productivity [2]. Salinity is the principal cause of crop yield loss worldwide and adversely affects plant growth and productivity [3]. To prevent the potentially harmful effects of such stresses, plants have evolved complex mechanisms to recognize external signaling networks and to be evidence of adaptive responses at the physiological, biochemical, and molecular levels [3,4]. In these responses, a series of stress-responsive genes are induced in plants, largely regulated by a range of transcription factors [5]. To date, a lot of transcription factors from various plant species have been reported to be involved in stress responses [6]. For instance, the basic leucine zipper transcription factor AtbZIP24 [7], the WRKY18, WRKY25, WRKY33, WRKY60, and WRKY63 [8,9,10], the MYC2 and MYB15 [11,12] have been reported to be involved in abiotic stress in Arabidopsis. The NbWRKY79 has been reported to be involved in salt stress in Nicotiana benthamiana (N. benthamiana) [3]. The SlGRAS40 and SlAREB have been reported to be involved in abiotic stress in tomato [2,13].
SBP-box (Squamosa-promoter binding protein) genes are specific to plants, which contain a highly conserved SBP domain [14]. This SBP domain comprises approximately 76 amino acid residues, including two zinc fingers (C3H and C2HC) and a nuclear localization signal [15,16]. Many studies show that SBP-box genes are involved in the network of the flower formation pathway, plant growth and development. For example, AmSBP1 and AmSBP2 can interact with the promoter sequence of the floral meristem identity gene SQUAMOSA and control of early flower development in Antirrhinum majus [14]. The SOC1-SPL module integrates photoperiod and gibberellic acid signals to control flowering time in Arabidopsis [17]. OsSPL9 can directly bind to the CuRE element in the promoter region of miR528 gene and activate the transcription of miR528, which regulates rice development at heading stage [18]. However, some studies show that SBP-box genes play a role in responses to abiotic and biotic stresses. For example, AtSPL14 is induced by the fungal toxin fumonisin B1, which induces programmed cell death in Arabidopsis [19]. CaSBP12 involved in plant defense response to Phytophthora capsici infection in pepper plants [20]. OsSPL9 can activate the transcription of miR528 gene, promote its accumulation in rice, then inhibit the expression of target mRNA AO, and finally eliminate the inhibition of ascorbic acid oxidase (AO) on RSV [21]. Knockout of OsSPL10 in rice enhanced plants’ salt tolerance and overexpression of OsSPL10 in rice reduced plants’ salt tolerance [22]. Overexpression of BpSPL9 in Betula platyphylla Suk. improved the ability to scavenging of ROS to salt stress [23]. slSBP2-L1 (Solyc05g015840) was highly induced by salt stress in tomato [24]. Arabidopsis miR156 regulates tolerance to heat stress through the transcription factors of SPL2, SPL9, and SPL11 [25]. Overexpression of OsmiR156k in rice reduced the tolerance to cold stress by down-regulating SPL3, SPL14, and SPL17 [26]. Knocking down a microRNA156 target gene, SPL13, improves drought tolerance in alfalfa (Medicago sativa) [27].
However, to our knowledge, there is no report on the research of CaSBP genes in abiotic stress in pepper. In our previous study, we identified a CaSBP12 gene (Accession no. Capana10g000886), which encodes 299 amino acids, contains a SBP domain, and is located in the nucleus [16,20]. Besides, our previous work indicates that CaSBP12 gene negatively regulates plants defense response to Phytophthora capsici infection in pepper [20]. However, the role of CaSBP12 in abiotic stress is not clear. In this study, we found that CaSBP12 gene responses to salt stress, and plays a negative role in the tolerance to salt stress in pepper.

2.1. Expression of the CaSBP12 Gene in Pepper under Salt Stress

The tobacco rattle virus (TRV)-based VIGS system was used for silencing the CaSBP12 gene in pepper, following the method described by Wang (2013) [28]. To generate the VIGS plasmid construction of CaSBP12 gene, a 250-bp fragment of CaSBP12 was amplified using their specific primer (Supplementary Table S2). The obtained product was cloned into the TRV2 vectors using the double digested method with BamHI and KpnI enzymes. Then, it was sequenced through Sangon Biotech Company (Shanghai, China). The recombined vector (TRV2:CaSBP12), TRV2:00 (negative control), TRV2:CaPDS (phytoenedesaturase, positive control), and TRV1 were transformed into Agrobacterium tumefaciens strain GV3101 using the freeze-thaw method. Pepper seedlings at two true leaves stage were used for the silencing of CaSBP12 gene using the method described by Zhang et al. (2013) [43]. The injected plants were first grown in a growth chamber at 18 °C in dark for 2 days, and then grown in a growth chamber at 22 °C (day for 16 h)/18 °C (night for 8 h) with 60% relative humidity. Forty days post-infiltration, leaves from the control and silenced plants were collected to measure the silencing efficiency.

Total RNA was isolated using the method described by Guo et al. (2012) [48]. The first chain was synthesized using Prime Script Kit (Takara, Dalian, China) following the manufacturer’s instructions. The cDNA concentration was diluted to 50 ng/µL and used for qPCR. Here, we provide the qPCR experiments as described by Bustin et al. (2009) [49]. The iQ5.0 Bio-Rad iCycler thermocycler (Bio-Rad, Hercules, CA, USA) machine was used for qPCR using the procedure described by Zhang et al. (2018) [20]. Briefly, the qPCR cycling conditions are as follows: pre-denaturation at 95 °C for 1 min, followed by 40 cycles of denaturation at 95 °C for 10 s, annealing at 56 °C for 30 s, and extension at 72 °C for 30 s. The fluorescent signal was measured at the end of each cycle, and melting curve analysis was performed by heating the PCR product from 56 to 95 °C in order to verify the specificities of the primers. The pepper actin mRNA, CaActin2 (accession no. AY572427), was used as the reference in pepper [50]. The Nicotiana benthamiana actin gene, Nbactin-97 (accession No. LOC109206422), was used as reference in Nicotiana benthamiana [51]. All the primer specificities used for the qPCR were evaluated using NCBI Primer BLAST (Supplementary Table S3). The details of the length of per gene amplification, the location of the primer were supplied in Supplementary Table S3. Gene expression was quantified following the 2−△△CT method [52]. For example, the mean CT of the CaSBP12 gene in untreated and treated samples was 26.34 and 29.64, respectively. The mean CT of the reference gene (CaActin2) in the untreated and treated samples was 20.78 and 21.41, respectively. The relative expression profile of CaSBP12 can be calculated using the following formula:
The relative expression profile of CaSBP12 = 2^(−[(29.64 − 21.41) − (26.34 − 20.78)])

Statistical analysis was performed using the data processing system (DPS7.05, China) for one-way analysis of variance (ANOVA) [20]. The value p ≤ 0.05 or p ≤ 0.01 was considered to be significantly different. All experiments were performed and analyzed separately with at least three biological replicates. 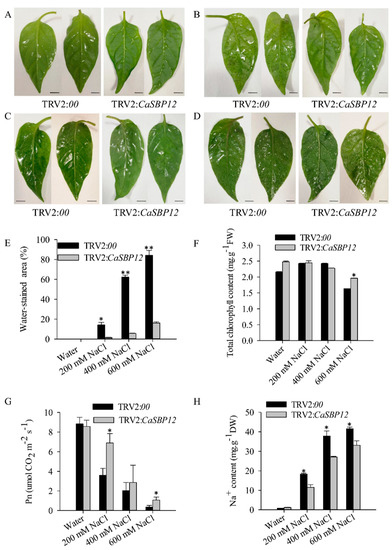 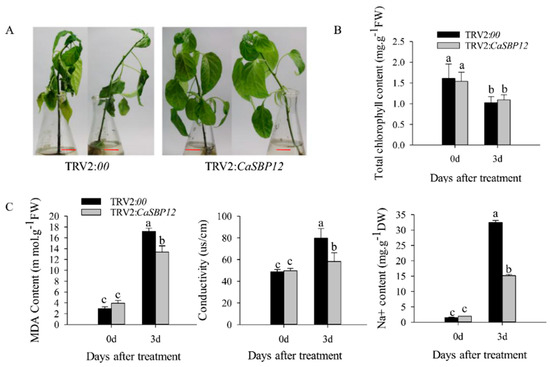 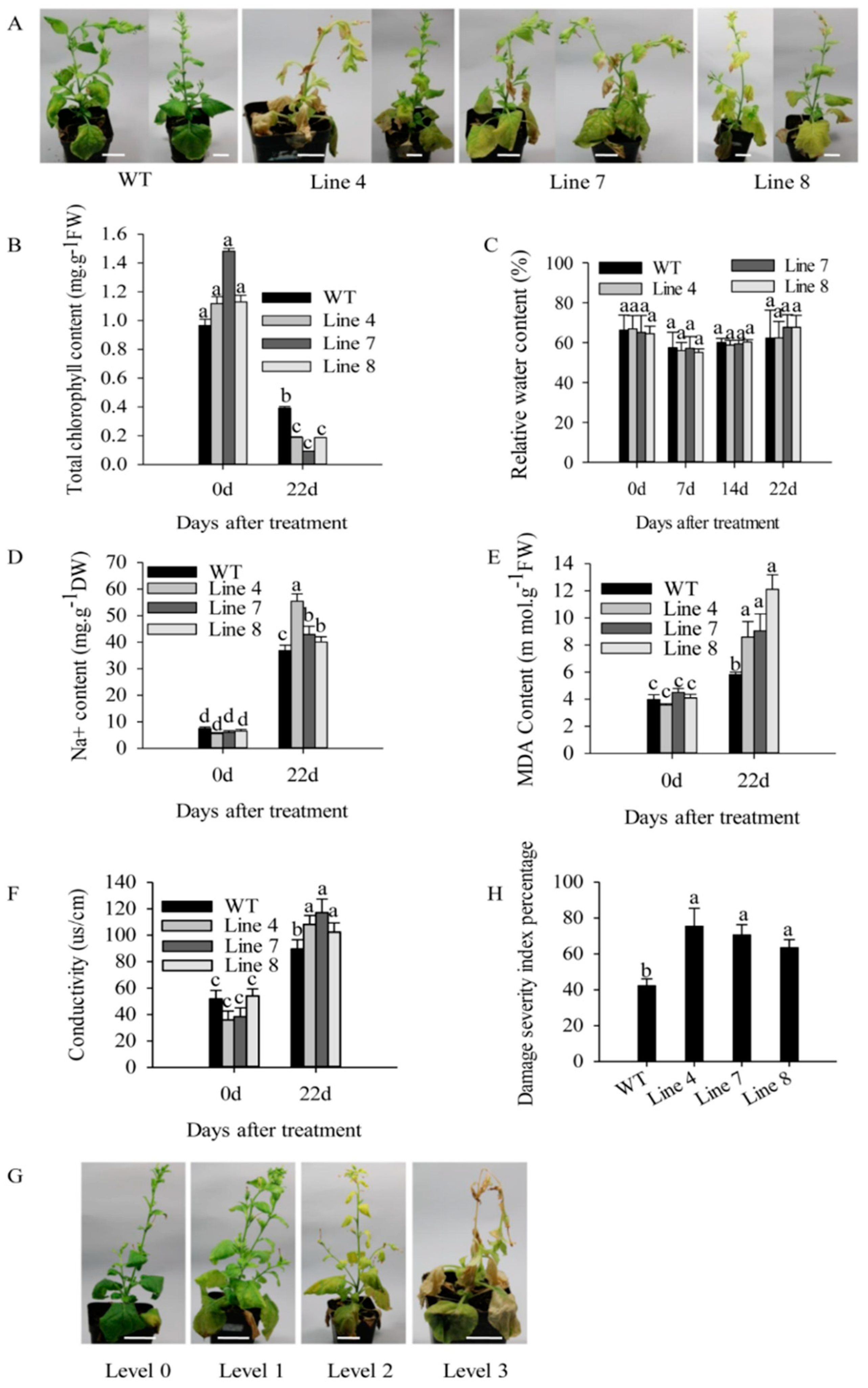