Revisiting Platelets and Toll-Like Receptors (TLRs): At the Interface of Vascular Immunity and Thrombosis
Previous Article in Special Issue

Hydride Abstraction as the Rate-Limiting Step of the Irreversible Inhibition of Monoamine Oxidase B by Rasagiline and Selegiline: A Computational Empirical Valence Bond Study

:
Monoamine oxidases (MAOs) catalyze the degradation of a very broad range of biogenic and dietary amines including many neurotransmitters in the brain, whose imbalance is extensively linked with the biochemical pathology of various neurological disorders, and are, accordingly, used as primary pharmacological targets to treat these debilitating cognitive diseases. Still, despite this practical significance, the precise molecular mechanism underlying the irreversible MAO inhibition with clinically used propargylamine inhibitors rasagiline and selegiline is still not unambiguously determined, which hinders the rational design of improved inhibitors devoid of side effects current drugs are experiencing. To address this challenge, we present empirical valence bond QM/MM simulations of the rate-limiting step of the MAO inhibition involving the hydride anion transfer from the inhibitor α-carbon onto the N5 atom of the flavin adenin dinucleotide (FAD) cofactor. The proposed mechanism is strongly supported by the obtained free energy profiles, which confirm a higher reactivity of selegiline over rasagiline, while the calculated difference in the activation Gibbs energies of ΔΔG‡ = 3.1 kcal mol−1 is found to be in very good agreement with that from the measured literature kinact values that predict a 1.7 kcal mol−1 higher selegiline reactivity. Given the similarity with the hydride transfer mechanism during the MAO catalytic activity, these results verify that both rasagiline and selegiline are mechanism-based irreversible inhibitors and offer guidelines in designing new and improved inhibitors, which are all clinically employed in treating a variety of neuropsychiatric and neurodegenerative conditions.
Keywords:
irreversible inhibition; monoamine oxidase; hydride transfer; antiparkinsonian drugs; neurodegeneration; flavoenzymes 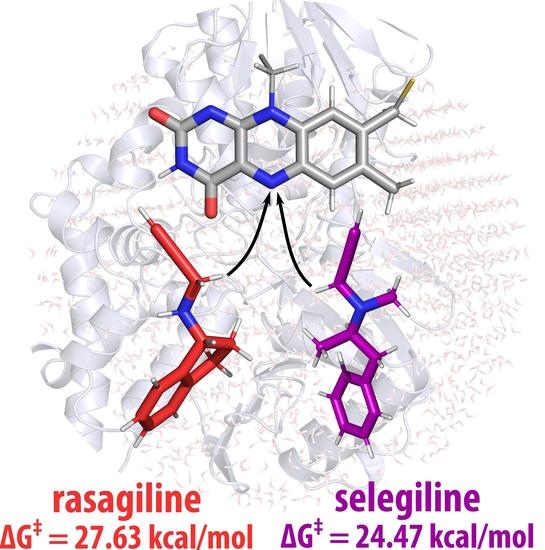 In this work, we performed a multiscale computational analysis of the initial rate-limiting step of the irreversible inhibition of the MAO B enzyme by clinical inhibitors rasagiline and selegiline, involving the hydride anion transfer from the inhibitor C(α) atom to the flavin co-factor N5 atom, by using the state-of-the-art Empirical Valence Bond (EVB) QM/MM treatment. By properly including fully featured solvated enzymatic environment, well converged free energy profiles were obtained that gave the activation free energies of ΔG‡(RAS) = 27.6 and ΔG‡(SEL) = 24.5 kcal mol−1. The computed values underline a higher reactivity of SEL, being in excellent agreement with the kinact data and the experimentally determined ΔΔG‡ = 1.7 kcal mol−1 that point to the same conclusion. In line with that, the calculated reaction free energies also favor the inhibition reaction with SEL, as the hydride abstraction is significantly more exergonic with that inhibitor (ΔΔGR = −8.2 kcal mol−1).
The obtained results strongly support the validity of the proposed hydride ion transfer as the likely mechanism for the irreversible inhibition of MAO B with propargylamine inhibitors. In this way, the acquired insight firmly confirms that both rasagiline and selegiline are mechanism-based inhibitors, being strongly in line with experiments. The present study represents one of only a few attempts to elucidate a molecular basis for the inhibition pathway of MAO enzymes, which bears a significant relevance for neurology. In addition, the discussion presented here offers guidelines for a rational design of new and more effective inhibitors, which are all clinically employed in treating a variety of neuropsychiatric and neurodegenerative conditions. Additionally, such improved transition state analogues are likely to be associated with less adverse effects, thus allowing for lower daily doses, tying in with some of the most prominent challenges of modern medicine.

This research was funded by the Croatian Science Foundation, grant number IP-2014-09-3386, and by the Slovenian Research Agency, program group P1-0012.