Roles of Cannabinoids in Melanoma: Evidence from In Vivo Studies
Next Article in Special Issue

Role of Leptin in Inflammation and Vice Versa

There and Back Again: Leptin Actions in White Adipose Tissue

Leptin is a hormone discovered almost 30 years ago with important implications in metabolism. It is primarily produced by white adipose tissue (WAT) in proportion to the amount of fat. The discovery of leptin was a turning point for two principle reasons: on one hand, it generated promising expectations for the treatment of the obesity, and on the other, it changed the classical concept that white adipose tissue was simply an inert storage organ. Thus, adipocytes in WAT produce the majority of leptin and, although its primary role is the regulation of fat stores by controlling lipolysis and lipogenesis, this hormone also has implications in other physiological processes within WAT, such as apoptosis, browning and inflammation. Although a massive number of questions related to leptin actions have been answered, the necessity for further clarification facilitates constantly renewing interest in this hormone and its pathways. In this review, leptin actions in white adipose tissue will be summarized in the context of obesity. View Full-Text
Keywords: leptin; white adipose tissue; obesity leptin; white adipose tissue; obesity
►▼ Show Figures 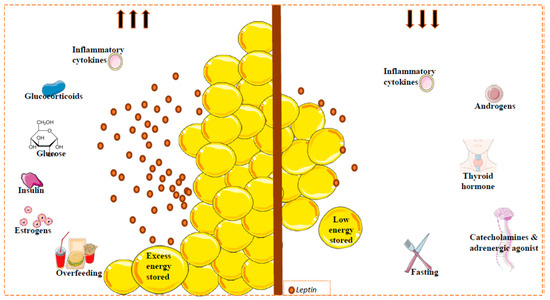