Downy mildew, powdery mildew, and grey mold are some of the phytopathological diseases causing economic losses in agricultural crops, including grapevine, worldwide. In the current scenario of increasing global warming, in which the massive use of agrochemicals should be limited, the management of fungal disease has become a challenge. The knowledge acquired on candidate resistant (R) genes having an active role in plant defense mechanisms has allowed numerous breeding programs to integrate these traits into selected cultivars, even though with some limits in the conservation of the proper qualitative characteristics of the original clones. Given their gene-specific mode of action, biotechnological techniques come to the aid of breeders, allowing them to generate simple and fast modifications in the host, without introducing other undesired genes. The availability of efficient gene transfer procedures in grapevine genotypes provide valid tools that support the application of new breeding techniques (NBTs). The expertise built up over the years has allowed the optimization of these techniques to overexpress genes that directly or indirectly limit fungal and oomycetes pathogens growth or silence plant susceptibility genes. Furthermore, the downregulation of pathogen genes which act as virulence effectors by exploiting the RNA interference mechanism, represents another biotechnological tool that increases plant defense. In this review, we summarize the most recent biotechnological strategies optimized and applied on Vitis species, aimed at reducing their susceptibility to the most harmful fungal and oomycetes diseases. The best strategy for combating pathogenic organisms is to exploit a holistic approach that fully integrates all these available tools. View Full-Text
Keywords: plant biotechnology; Vitis vinifera; RNA interference; genome editing; biotic stresses plant biotechnology; Vitis vinifera; RNA interference; genome editing; biotic stresses
►▼ Show Figures 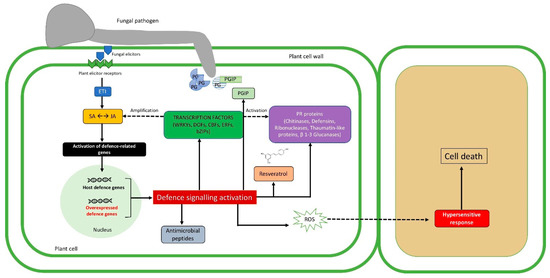