Conversion of Isocyanide to Amine in The Presence of Water and Hg(II) Ions: Kinetics and Mechanism as Detected by Fluorescence Spectroscopy and Mass Spectrometry
Previous Article in Special Issue

Upregulation of the TRPA1 Ion Channel in the Gastric Mucosa after Iodoacetamide-Induced Gastritis in Rats: A Potential New Therapeutic Target

Acute gastritis is often untreatable by acid secretion-inhibiting drugs. Understanding the protective mechanisms including the role of Transient Receptor Potential Ankyrin1 (TRPA1) and Vanilloid1 (TRPV1) channels localized on capsaicin-sensitive afferents and non-neuronal structures might identify novel therapeutic approaches. Therefore, we characterized a translational gastritis model using iodoacetamide (IAA) and investigated TRPA1/V1 expressions. Wistar rats and CD1, C57Bl/6J mice were exposed to IAA-containing (0.05, 0.1, 0.2, 0.3, 0.5%) drinking water for 7 or 14 days. Body weight and water consumption were recorded daily. Macroscopic lesions were scored, qualitative histopathologic investigation was performed, TRPA1/V1 immunopositivity and mRNA expressions were measured. IAA induced a concentration-dependent weight loss and reduced water intake in both species. Hyperemia, submucosal edema, inflammatory infiltration and hemorrhagic erosions developed after 7 days, while ulcers after 14 days in rats. Trpa1 mRNA/protein expressions were upregulated at both timepoints. Meanwhile, TRPV1 immunopositivity was upregulated in the gastric corpus after 0.05% IAA ingestion, but downregulated after 0.2%, whereas Trpv1 mRNA did not change. Interestingly, no macroscopic/microscopic changes were observed in mice. These are the first data for the concentration- and duration-dependent changes in the IAA-induced gastritis in rats accompanied by TRPA1 upregulation, therefore, its therapeutic potential in gastritis should further be investigated. View Full-Text
Keywords: TRPA1; TRV1; gastritis; inflammation; erosion; rodent TRPA1; TRV1; gastritis; inflammation; erosion; rodent
►▼ Show Figures 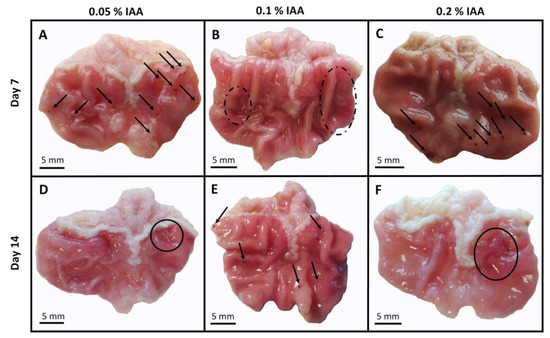