Is p38 MAPK Associated to Drugs of Abuse-Induced Abnormal Behaviors?

Ursula A. Germann and

Multifactorial pathologies, involving one or more aggregated protein(s) and neuroinflammation are common in major neurodegenerative diseases, such as Alzheimer’s disease and dementia with Lewy bodies. This complexity of multiple pathogenic drivers is one potential explanation for the lack of success or, at best, the partial therapeutic effects, respectively, with approaches that have targeted one specific driver, e.g., amyloid-beta, in Alzheimer’s disease. Since the endosome-associated protein Rab5 appears to be a convergence point for many, if not all the most prominent pathogenic drivers, it has emerged as a major therapeutic target for neurodegenerative disease. Further, since the alpha isoform of p38 mitogen-activated protein kinase (p38α) is a major regulator of Rab5 activity and its effectors, a biology that is distinct from the classical nuclear targets of p38 signaling, brain-penetrant selective p38α kinase inhibitors provide the opportunity for significant therapeutic advances in neurogenerative disease through normalizing dysregulated Rab5 activity. In this review, we provide a brief summary of the role of Rab5 in the cell and its association with neurodegenerative disease pathogenesis. We then discuss the connection between Rab5 and p38α and summarize the evidence that through modulating Rab5 activity there are therapeutic opportunities in neurodegenerative diseases for p38α kinase inhibitors. View Full-Text
Keywords: p38 MAPK; p38α; Rab5; endosome; Alzheimer’s; Lewy Bodies; amyloid-β; tau; α-synuclein p38 MAPK; p38α; Rab5; endosome; Alzheimer’s; Lewy Bodies; amyloid-β; tau; α-synuclein
►▼ Show Figures 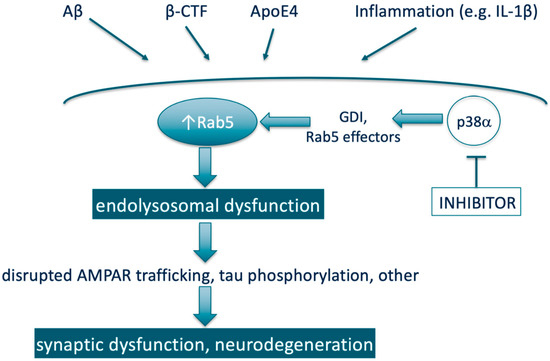