According to the World Health Organization (WHO), obesity is defined as an abnormal or excessive accumulation of body fat that increases the risk of many health problems. In the United States, obesity affects 33% of the population, and the prevalence is expected to increase to 50% by 2030 [1]. Obesity is associated with an increased risk of metabolic syndrome, type 2 diabetes, hypertension, and cardiovascular disease [1,2,3]. The metabolic syndrome causes a spectrum of liver injury resulting in nonalcoholic fatty liver disease (NAFLD), which can progress to non-alcoholic steatohepatitis (NASH), fibrosis, and hepatocellular carcinoma [4,5]. Many pathways that are attributable to this complex pathophysiology are under investigation for drug development, with a focus on treating inflammation, as well as improving metabolic pathways and slowing or reversing liver fibrosis.
Recent studies have shown that oxidative stress and inflammation have been implicated in the progression of obesity and metabolic syndrome [6,7,8]. Oxidative stress is triggered by an imbalance between pro-oxidants such as reactive oxygen species (ROS), heme, and antioxidants like heme oxygenase (HO) [5,6,7]. Obesity produces oxidative stress through the increased generation of ROS, resulting in cytotoxicity [9,10,11]. Therefore, the upregulation of heme and ROS due to a decreased HO activity increases pre-adipocyte differentiation, as well as adipogenesis and the release of inflammatory adipokines such as nephroblastoma overexpressed gene (NOV), tumor necrosis factor-α (TNFα), and Interleukin-6 (IL-6) [11,12,13]. Interestingly, an increased ROS production does not increase HO-1 expression, leading to the resultant development of obesity and metabolic syndrome [10,11,14]. Recently, a novel adipokine, NOV, a member of the family of the cellular communication network (CCN), has been shown to be upregulated in HFD-fed mice [15,16]. The deletion of NOV improved glucose tolerance through an increase in mitochondrial biogenesis [16,17]. Conversely, the upregulation of NOV results in an increased adiposity, as well as increased plasma levels of cholesterol and triglycerides [15,16]. Obesity releases free fatty acids (FFA) that trigger the Toll-like receptor 4 (TLR4) signaling pathway, resulting in the activation of the nuclear factor-kappaB (NF-κB), a master transcription regulator in the production of pro-inflammatory cytokines, TNF-α [18,19,20]. TNF-α decreases insulin sensitivity, promotes powerful inflammatory mediators, specifically IL-6, and decreases anti-inflammatory cytokines such as adiponectin [19,20]. Thus, inflammatory adipokines such as NOV, TNF-α, and IL-6 have emerged as key regulators of obesity and insulin resistance. Matrix Metalloproteinase (MMP) is a group of enzymes that are zinc- and calcium-dependent endoproteinases that can degrade the extracellular matrix [21,22]. Obesity-associated liver inflammation and oxidative stress upregulate the expression of MMP-2 and MMP-9 [21,23]. MMP-2 and MMP-9 are known as gelatinase for their ability to degrade collagen type II and type IV, the major constituents of the basement membrane [23,24]. The destruction of the basement membrane results in dysfunction in the extracellular matrix, resulting in hepatic fibrosis [21,23]. Thus, the inhibition of MMP can have a potential therapeutic role in the progression of liver fibrosis.
Recently, there has been growing interest in examining natural antioxidants found in dietary plants, which may have beneficial effects on metabolic disease. Previous studies have reported that curcumin, black seed oil, and resveratrol have beneficial effects on insulin sensitivity and on the inhibition of inflammation [25,26,27,28] Natural substances such as pomegranates may be beneficial towards combating obesity [29,30]. Pomegranate juice contains antioxidants such as polyphenols (0.2–1%), tannins, punicic acid, and ascorbic acid [31,32]. Although the essential oil extracted from pomegranate contains a rich fraction of these antioxidants and is superior to pomegranate juice, it also contains high levels of fructose (6.83/100 g) and glucose (6.66/100 g) [33]. It has been shown that fructose-induced obesity results in an inflammatory and oxidative state; therefore, it promotes the development of NAFLD and metabolic syndrome [34]. The potential adverse effects of high sugar-containing pomegranate juice was highlighted in a clinical trial that revealed that pomegranate juice administration over one month did not modify insulin secretion and sensitivity in patients with obesity [35]. PSO may exhibit higher therapeutic benefits for metabolic syndrome than those of pomegranate juice due to the lack of sugars and presence of enhanced antioxidants. Dietary PSO was shown to ameliorate high-fat diet-induced obesity and insulin resistance in mice, independent of changes in food intake or energy expenditure [36]. However, more research needs to be conducted in order to determine the beneficial effects of PSO in obesity-related metabolic syndrome and mitochondrial dysfunction because there are currently no conclusive studies that establish this association. Hence, the aim of this study was to determine the effects on mice fed an HFD that a dietary supplementation of 1% of PSO had on: body weight gain, hypertension, NAFLD, mitochondrial and thermogenic gene levels, and insulin sensitivity.

2.1. Effects of PSO on Physiological Parameters

Histological analyses of livers from lean mice revealed no significant steatosis, rare ballooning, no inflammatory foci, and no fibrosis (Figure 2A). The livers of HFD mice exhibited elevated steatosis (green arrows), moderate lobular inflammatory loci (yellow arrowheads), hepatocyte ballooning, and fibrosis (caret) (Figure 2B), which were all reduced by PSO treatment (Figure 2C). The morphometric analysis of liver lipid droplets showed that PSO treatment decreased the lipid droplet diameter when compared to the HFD group (p < 0.05) (Figure 2D). The lipid content was increased (p < 0.05) in the HFD group when compared to the lean group and was significantly (p < 0.05) reduced in PSO-treated mice (Figure 2E).

Eight-week-old C57BL/6J male mice were divided into three treatment groups of six animals as follows: group (1) Lean; group (2) HFD; group (3) HFD treated for the last eight weeks with PSO at a concentration of 40 mL per kg of food PSO (HFD + PSO group) (Figure 8). This concentration of PSO is equivalent to 160–200 mg PSO consumed per day, given that the mice consume between 4–5 g of chow per day. The HFD group and the HFD and PSO group were fed western diets with a 51% fat content, while lean mice were provided regular diets (Harlan, Teklad Lab animal diets, Indianapolis, IN, USA) for 24 weeks. For the additional eight weeks, the HFD in the PSO group was supplemented with 1% PSO (vol/wt). The formulation of PSO used was as follows; 1% PSO, p-Cymene 1.24%, Carvacrol 0.08%, FFA 1, 29%, Oleic Acid 21.53%, palmitic acid 11.31%, linoleic acid 57.44%, and other fatty acid 1.98%, (Trinutra Ltd., www.trirnutra.Com, Hamazmera 9, Nes Ziona, Israel).
The PSO was mixed into the HFD food, made into pellets using a mixer, and given for eight weeks, as shown in the scheme. After eight weeks, the mice were euthanized. All animal experiments were performed at the New York Medical College and followed the New York Medical College IACUC institutionally approved protocol, in accordance with NIH guidelines (Protocol # 22-2-0415H, 18 April 2018). Mice were euthanized with ketamine (100 mg/kg)/xylazine (10 mg/kg) injection, followed by cervical dislocation and tissue collection.

Fasting BG was measured from tail blood following a six-hour fast. BP was measured via the tail-cuff method using the CODA tail-cuff System (Kent Scientific, Torrington, CT, USA). Mice were acclimated to the oxygen consumption chamber over a three-week period in two-hour increments, three times a week. The Oxylet gas analyzer and airflow unit (Oxylet, Panlab-Bioseb, Vitrolles, France) were used to determine mouse VO2. Each mouse was placed individually in the instrument, and VO2 and VCO2 were measured. The observational data for VO2 are expressed as the consumed oxygen per kilogram BW per minute (ml/kg/min) [3,56]. The respiratory quotient (RQ) was calculated as VCO2/VO2.

The serum concentrations of aspartate aminotransaminase (AST) and alanine aminotransferase (ALT) were evaluated by an enzyme-linked immunosorbent assay (ELISA) kit (Abcam, Cambridge, MA, USA) according to the manufacturer’s instructions. Briefly, 900 μL of reagent was incubated for 3 min at 37 °C, followed by adding 45 μL serum or blank (45 μL dd H2O). After incubating for 10 min, the absorbance at 450 nm was measured using a spectrophotometer (Synergy HT, BioTek Instrument Inc., Winooski, VT, USA).

Data are expressed as means ± S.E.M. Bonferroni’s post-test analysis for multiple comparisons was used to calculate the significance of mean value differences using a one-way analysis of variance. The null hypothesis was rejected at p ˂ 0.05.

The obesity epidemic is the major driving force behind the increasing incidence of NAFLD and its resulting complications, including liver cirrhosis and liver cancers. Currently, there are no FDA approved drugs for the specific treatment of NAFLD. Lifestyle modification with the specific goal of weight loss is the first line of treatment for NAFLD. The results of the present study demonstrate that dietary supplementation with PSO could provide an additional defense against the development and progression of NAFLD and its associated cardiovascular morbidities. Our current study shows that obesity-induced hepatic steatosis and fibrosis that end in NAFLD are markedly attenuated by dietary PSO supplementation. PSO supplementation results in decreased levels of adipokines and inflammatory markers, e.g., levels of NF-KB, NOV/CCN3, IL-6, MMP2, and MMP9. PSO also contains antioxidants and increases the levels of HO-1, which has a positive effect on mitochondrial function and increases mitochondrial signaling by increasing PRDM16, PGC1α, MFN-2, and OPA1. As a result, mitochondrial biogenesis increases and insulin sensitivity increases, resulting in a healthy liver (Figure 7). 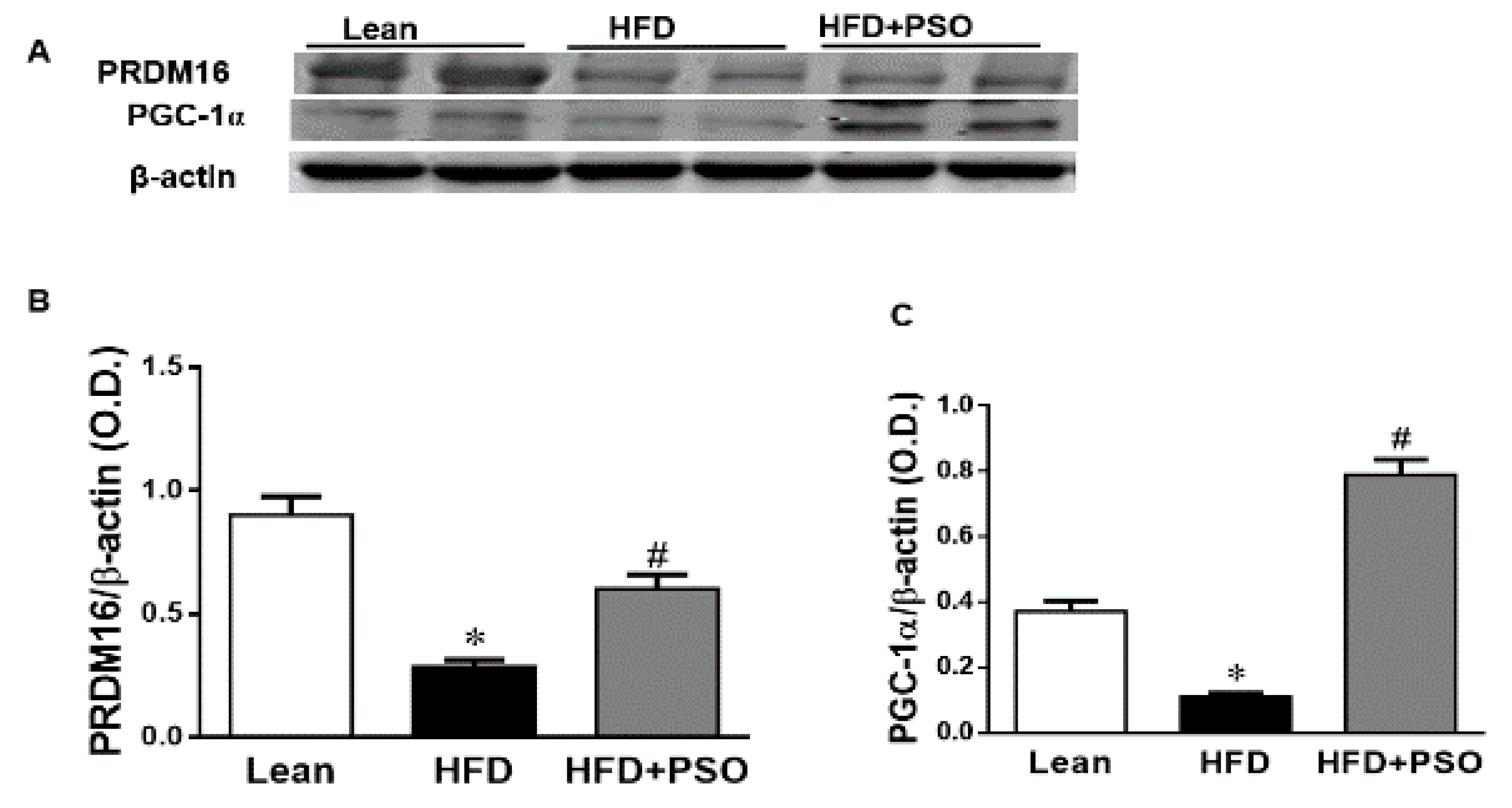