The Role of microRNAs in Organismal and Skin Aging

The aging process starts directly after birth and lasts for the entire lifespan; it manifests itself with a decline in an organism’s ability to adapt and is linked to the development of age-related diseases that eventually lead to premature death. This review aims to explore how microRNAs (miRNAs) are involved in skin functioning and aging. Recent evidence has suggested that miRNAs regulate all aspects of cutaneous biogenesis, functionality, and aging. It has been noted that some miRNAs were down-regulated in long-lived individuals, such as let-7, miR-17, and miR-34 (known as longevity-related miRNAs). They are conserved in humans and presumably promote lifespan prolongation; conversely, they are up-regulated in age-related diseases, like cancers. The analysis of the age-associated cutaneous miRNAs revealed the increased expression of miR-130, miR-138, and miR-181a/b in keratinocytes during replicative senescence. These miRNAs affected cell proliferation pathways via targeting the p63 and Sirtuin 1 mRNAs. Notably, miR-181a was also implicated in skin immunosenescence, represented by the Langerhans cells. Dermal fibroblasts also expressed increased the levels of the biomarkers of aging that affect telomere maintenance and all phases of the cellular life cycle, such as let-7, miR-23a-3p, 34a-5p, miR-125a, miR-181a-5p, and miR-221/222-3p. Among them, the miR-34 family, stimulated by ultraviolet B irradiation, deteriorates collagen in the extracellular matrix due to the activation of the matrix metalloproteinases and thereby potentiates wrinkle formation. In addition to the pro-aging effects of miRNAs, the plausible antiaging activity of miR-146a that antagonized the UVA-induced inhibition of proliferation and suppressed aging-related genes (e.g., p21WAF-1, p16, and p53) through targeting Smad4 has also been noticed. Nevertheless, the role of miRNAs in skin aging is still not fully elucidated and needs to be further discovered and explained. View Full-Text
Keywords: microRNA; aging; skin microRNA; aging; skin
►▼ Show Figures 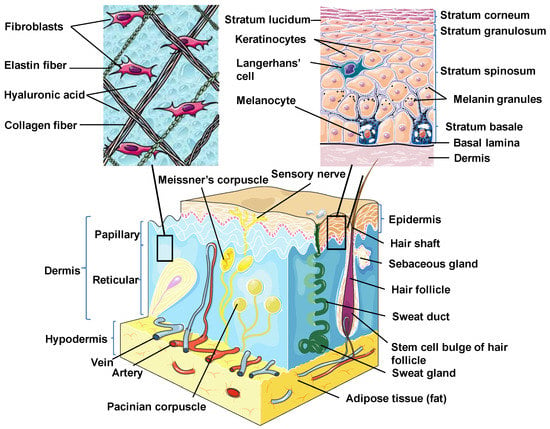