Bombyx mori nucleopolyhedrovirus (BmNPV) is a silkworm disease that is especially harmful to cocoon production and seriously restricts sericultural development. Our laboratory successfully cultivated a new highly BmNPV-resistant silkworm variety, Huakang 2; however, its mechanism of BmNPV resistance remains unclear. To understand its resistance mechanism, we conducted a metabolomic and transcriptomic study of the midgut of silkworm varieties, Baiyu N and Baiyu after BmNPV infection. We identified 451 differential metabolites, which were mostly comprised of small molecules, such as saccharides, acids, amines, alcohols, and glycosides. We found that the primary differences in disease resistance between the silkworm varieties are metabolic-pathways, tryptophan metabolism, oxidative phosphorylation, ABC-transporters, beta-alanine metabolism, and phenylalanine metabolism. Combined analysis with transcriptomic data suggested that tryptophan metabolism and oxidative phosphorylation are closely related to the silkworms’ BmNPV resistance. We hypothesize that the roles of the two metabolic pathways in the BmNPV resistance mechanism might be the following: Oxidative phosphorylation generates a large amount of adenosine triphosphate (ATP) in response to BmNPV infection to provide silkworms the energy required for establishing BmNPV resistance. Tryptophan metabolism then activates the aryl hydrocarbon receptor (AhR) through the exogenous virus BmNPV, which activates the silkworm’s immune system to defeat BmNPV infections. View Full-Text
Keywords: silkworm; BmNPV; GC-MS; RNA-seq; metabolic pathway silkworm; BmNPV; GC-MS; RNA-seq; metabolic pathway
►▼ Show Figures 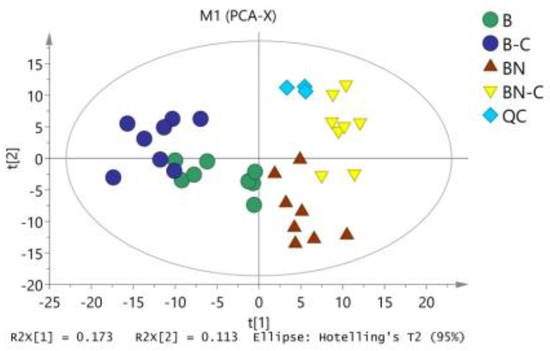