New Insight into the Composition of Wheat Seed Microbiota

Endophytes are associated with host plants throughout their life history from seed germination to fruit development. One of the most important plant organs colonized by endophytic microbiota is the seed. The aim of this study was to determine the structure of the seed core microbiome inhabiting the endosperms and embryos of eight wheat cultivars with the use of a culture-independent technique. The seeds of Triticum aestivum L. cv. Hondia, Wilejka, STH, Opcja, Tybalt, Euforia and Triticum spelta L. cv. Rokosz and Schwabencorn (producer: Plant Breeding Strzelce Sp. z o.o. Group IHAR) were studied. Rokosz and Hondia were cultured in vitro and in vivo to identify obligatory bacterial endophytes. A restrictive analysis of reads originating from the in vitro plants has demonstrated that the bacterial genera Paenibacillus and Propionibacterium inhabiting Rokosz and Hondia plants have a status of obligatory microorganisms. Greater biodiversity of seed-borne endophytes was found in the seed endosperms than in the embryos. The multiple comparison analysis of the OTU abundance indicated that the seed part significantly influenced the relative abundance. The seed-born microbiome is not statistically significantly dependent on the wheat cultivars; however, it cannot be claimed that every wheat seed is the same. View Full-Text
Keywords: endophytes; seeds; embryos; endosperm; wheat; core microbiome; NGS endophytes; seeds; embryos; endosperm; wheat; core microbiome; NGS
►▼ Show Figures 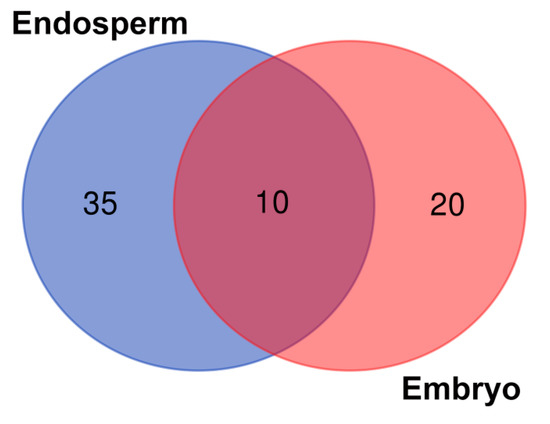