A Guide to the Short, Long and Circular RNAs in Hypertension and Cardiovascular Disease
Previous Article in Special Issue

Cyclophilin A (CypA) is a highly abundant protein in the cytoplasm of most mammalian cells. Beyond its homeostatic role in protein folding, CypA is a Damage-Associated Molecular Pattern which can promote inflammation during tissue injury. However, the role of CypA in kidney disease is largely unknown. This study investigates the contribution of CypA in two different types of kidney injury: acute tubular necrosis and progressive interstitial fibrosis. CypA (Ppia) gene deficient and wild type (WT) littermate controls underwent bilateral renal ischaemia/reperfusion injury (IRI) and were killed 24 h later or underwent left unilateral ureteric obstruction (UUO) and were killed 7 days later. In the IRI model, CypA−/− mice showed substantial protection against the loss of renal function and from tubular cell damage and death. This was attributed to a significant reduction in neutrophil and macrophage infiltration since CypA−/− tubular cells were not protected from oxidant-induced cell death in vitro. In the UUO model, CypA−/− mice were not protected from leukocyte infiltration or renal interstitial fibrosis. In conclusion, CypA promotes inflammation and acute kidney injury in renal IRI, but does not contribute to inflammation or interstitial fibrosis in a model of progressive kidney fibrosis.
Keywords: acute kidney injury; chronic kidney disease; cyclophilin A; fibrosis; inflammation; renal fibrosis; tubular necrosis acute kidney injury; chronic kidney disease; cyclophilin A; fibrosis; inflammation; renal fibrosis; tubular necrosis
►▼ Show Figures 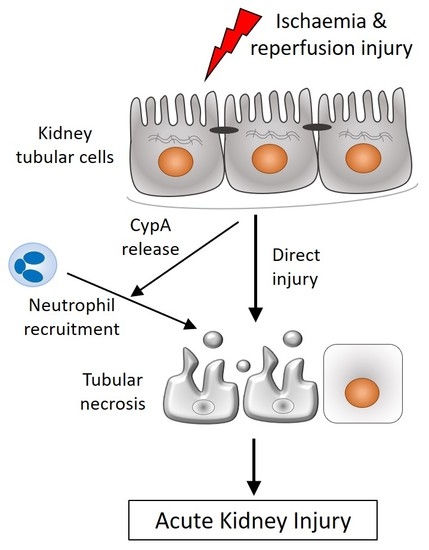