Genetic Characterization of Endometriosis Patients: Review of the Literature and a Prospective Cohort Study on a Mediterranean Population

Endometriosis inflicts 6–10% of women of reproductive age, with affected women suffering from debilitating pelvic pain, dysmenorrhea, dyspareunia, and painful defecation. The prevalence of subfertility or infertility is higher in the endometriosis population, with up to half of endometriotic women suffering from reduced fecundity [1]. Endometriotic lesions can be classified into three subphenotypes: superficial peritoneal endometriosis (PE), ovarian cysts (ovarian endometrioma; OE), and deep infiltrating endometriosis (DIE) [2]. Superficial peritoneal lesions refer to implants found on the pelvic organs or pelvic peritoneum. They are typically white, red, or blue–black power burns and may be phenotypically progressive over time [3,4,5]. Endometriomas are formed when endometrial tissue implants on the ovary surface or penetrate into the ovary [6,7,8]. By contrast, DIE involves nodular lesions which invade the surrounding organs beneath the peritoneum [9]. They are commonly found on the uterosacral ligaments, bladder, vagina, and intestine and are more aggressive in nature [10]. The endometriosis subphenotypes are being recognized as clinicopathologically different from one another and are thought to be separate entities [3,10,11].
Many theories and hypotheses have been proposed to explain the pathogenesis and development of endometriosis [12,13]. The most widely accepted theory to explain the etiology of endometriosis is the retrograde menstrual hypothesis. During menses, viable menstrual fragments of eutopic endometrial origin back-traverse through the fallopian tubes, into the peritoneal cavity, which subsequently leads to these cells being implanted onto extra-uterine ectopic sites. However, this theory is insufficient to explain the presence of the disease in early puberty and in adolescents [14], and it does not address why endometriosis only occurs in a certain subset of the female population. Other theories have been put forth, including the coelomic metaplasia theory, endometrial stem/progenitor cells theory, and Müllerianosis theory. These complementary theories and hypotheses help to generally frame our understanding of plausible mechanisms of the endometriosis pathogenesis and allow for the testing of hypotheses and improvement of the currently existing treatment options and the introduction of new treatments. Recent advances had been made with respect to elucidating partial progestin response based on the progesterone receptor status of endometriosis patients [15], which infers the prospect of precision or targeted medicine for treating endometriosis. In addition, key non-hormonal inflammation or signaling pathways associated with endometriosis subphenotypes could be exploited for therapeutic advantage, particularly in the era of targeted treatment and precision medicine [16].
Ectopic endometriotic lesions secrete chemokines into their surrounding tissues, recruiting immune cells, which in turn secrete cytokines and growth factors, such as TNF-α, IL-1β, IL-6, IL-8, IL-17, EGF, FGF, and VEGF, creating locally specific microenvironments that develop a reciprocal interaction with the peritoneal fluid (PF) [17,18,19]. The interaction of cytokines constitutes molecular signatures that are used to orchestrate immune and other complex responses in endometriosis development, plausibly in the evolution of lesion subphenotypes [14,20]. With increased appreciation that immunomodulatory proteins are part of an overall signaling network [21,22], significant discoveries of pro-angiogenic, macrophage-derived, and endometriosis-associated infertility cytokine signatures have been made in recent years [23,24,25,26,27]. While these studies provide insight into major pathways involved in disease stages, several outstanding gaps remain in terms of the cytokine relationship with endometriosis subphenotypes [28] and their implications in stratified treatment. Here, in this study, we investigated PF cytokines and their association with the three endometriosis subphenotypes. This allowed us to assemble cytokine signatures, which revealed dysregulated biological processes associated with the pathogenesis/pathophysiology of the three endometriosis subphenotypes. These results might direct new endometriosis therapeutic and diagnostic efforts toward subphenotype clinically relevant cytokine targets.

PF samples from 132 women (without endometriosis, EM− = 59; with endometriosis, EM+ = 73) (Table 1) were analyzed for 48 cytokines, using a validated multiplex immunoassay platform. Among the cytokines analyzed, 38 (79%) cytokines were detected and compared using univariate analysis (Tables S1 and S2). Because inflammatory cascades are brought about by the interaction of pro-inflammatory and anti-inflammatory cytokines [21], multivariate analysis such as PLSR provides a powerful way to obtain cytokine signatures to molecularly distinguish the patient groups in relation to disease presence and stages. Using partial least squares regression (PLSR), we identified a cytokine signature comprising IFN-α2, IL-12p70, IL-18, SCGF-β, VEGF-A, IL-3, and HGF that distinguished EM- from EM+ (Figure 1A). Notably, IFN-α2, IL-12p70, IL-18, SCGF-β, and VEGF-A are cytokines previously identified to be significantly altered between EM- from EM+ individuals [29,30,31]. However, a significant overlap between the EM- and EM+ clusters was observed (cumulative principal component (PC) score: 43%; Figure 1B), congruent with other studies [32]. We used the cumulative PC score as a measure of how well the cytokines could distinguish between EM-, EM+, EM+Mild, and EM+Severe patients (perfect separation of patient clusters at 100% cumulative PC score). When EM+Mild and EM+Severe individuals were compared to EM-, the PLSR separations improved slightly, as indicated by higher cumulative PC scores of 51% and 49% (Figure 1C and Figure S1A,B). PLSR modeling of PF cytokines in EM+Mild from EM+Severe separated at 59%, but remains relatively poor as observed in the other models of disease stages (EM- versus EM+Mild, EM- versus EM+Severe), suggesting heterogeneity of disease stages and subsequent incompleteness to distinguish endometriosis (Figure S1A–F).

To examine whether the cytokine signatures associated with different endometriosis subphenotypes showed themes of functional categorization, each signature was investigated by using the gene ontology (GO) classification system (Table 2). In OE relative to PE, enriched biological processes include the following: negative regulation of extrinsic apoptotic signaling pathway; positive regulation of B-cell proliferation; positive regulation of angiogenesis; and positive regulation of ERK1 and ERK2 cascade. In OE relative to DIE, natural-killer-cell-mediated cytotoxicity is directed against tumor-cell target, cell-cycle arrest, and cell migration, and tyrosine phosphorylation of Stat4 protein. Smooth muscle cell metaplasia that is associated with DIE was also identified in our pathway enrichment analysis [35], providing assurance that our cytokine-signature-derived identified meaningful subphenotype biological characteristics. In PE versus DIE, enriched biological processes include the following: positive regulation of interferon-gamma production, protein kinase B (also known as AKT) signaling, and MAPK cascade.

Peritoneal fluids (PF) were collected from women participants (n = 132), comprising 59 women who are endometriosis-free (EM-) and 73 with endometriosis (EM+) undergoing laparoscopic procedures for suspected endometriosis, infertility, sterilization procedures, and/or pelvic pain recruited in KK Women’s and Children’s Hospital, Singapore, and Singapore General Hospital, Singapore, under Centralized Institutional Research Board approval (CIRB 2010-167-D, approved 15 January 2016). Diagnostic laparoscopy was performed on all patients, with careful inspection of the uterus, fallopian tubes, ovaries, pouch of Douglas, and the pelvic peritoneum by gynecologists subspecializing in reproductive endocrinology and infertility. PFs were prepared as previously described [18], in line with Endometriosis Phenome and Biobanking Harmonisation Project Standard Operating Procedures [76]. Presence of endometriosis was systematically recorded and scored according to the revised American Fertility Society classification (rAFS) of endometriosis [77,78]. All patients gave written informed consent. Exclusion criteria included menstruating patients, post-menopausal patients, patients on hormonal therapy (e.g., norethisterone and microgynon) for at least three months before laparoscopy, and other confounding diseases, such as diabetes, adenomyosis, or any other chronic inflammatory diseases (rheumatoid arthritis, inflammatory bowel disease, systemic sclerosis, etc.). Patient characteristics are shown in Table 1. For the subjects undergoing robot-assisted excision of DIE at Singapore General Hospital, all women were preoperatively assessed for pelvic pain, bleeding, or fertility problems by trans-vaginal or trans-rectal ultrasound (if virgo intacta), using Voluson ultrasound machines (GE Healthcare). All sonographers were trained in the identification of DIE. All cases had pelvic DIE lesions of >5 mm, as well as evidence of partial or complete obliteration of the POD. In our unit, POD obliteration was taken to be the evidence of bowel involvement, and the use of robot-assisted technology for surgical excision was triggered due to suspected increased surgical complexity. Robot-assisted excision was performed by using the da Vinci Surgical Si™ system (Intuitive Surgical). The possible overlapping of the three lesion subphenotypes led us to classify the patients according to the worst lesion found in each subject, based on endometriosis subphenotype grouping by Chapron et al. [66,79]. Subjects who did not have endometriosis or have benign gynecological presentations, such as uterine fibroids and benign ovarian cysts, were taken as the endometriosis-free control group (EM-). All PFs were stored at −80 °C, until further analysis.

We estimated the sample size before commencing the study: We assumed a 95% sensitivity of the cytokine signatures in distinguishing the subphenotypes, and a 95% confidence interval (CI) of approximately ±10.0% would need 18 cases of one endometriosis subphenotype and the same number of another subphenotype. This statistical analysis, assuming the sensitivity of the signature cutoff is p = # test positive/N, where the sample size (n), number of women diagnosed with a particular endometriosis subtype (DIE, OE, PE), necessary to estimate p with precision ± L is given by the formula n = Z*Zp(1-p)/(L*L), where Z corresponds to the correct percentile of the standard normal distribution [80]. Our clinical experience noted a 1:2:1 PE:OE:DIE ratio, and hence we targeted 36 OE cases, and the patient numbers were rounded to fall within the estimated sensitivity.

GraphPad Prism 6 (GraphPad Software Inc., San Diego, CA, USA) was used for statistical analyses. Data were checked for normal distribution, using the Kolmogorov–Smirnov test. Unpaired or paired Student’s t-test was performed, as appropriate, to determine statistical significance between groups for normally distributed data. Mann–Whitney U test was used for non-normally distributed data. For comparing three or more groups, the data were analyzed by using one-way ANOVA, followed by the Student’s t-test with Bonferroni adjustment for pairwise comparisons. A p-value <0.05 was deemed to be statistically significant. A two-tailed Pearson correlation matrix was first performed with a confidence interval of 95%, followed by hierarchical clustering and the results plotted as heatmap 1.0 (GPS HemI 1.0 Heatmap Illustrator), using the clustering method of Average linkage and similarity metric of Pearson distance. Cytokines were further analyzed and signatures obtained by partial least squares regression (PLSR) modeling (Unscrambler X version 10.1) after the normalization of data by performing log2 transformation. Full cross-validation was applied in PLSR to increase model performance and for the calculation of coefficient regression values. PLSR models were compared by using Q-residuals obtained from the best principal components.

PLSR coefficient-derived cytokines were imputed into the Database for Annotation, Visualization and Integrated Discovery (DAVID) and cross-referenced against Gene Ontology (GO), for biological-process-enrichment analysis [81]. The p-values <0.05, based on Fisher Exact analysis and fold change >10 were imposed as enriched pathways. Bonferroni and Benjamini adjusted p-values are reported in Table S5. As a result of these corrections, the adjusted p-values get larger, and it could hurt the sensitivity of discovery if overemphasizing them [81,82]. Furthermore, these commonly used multiple testing-adjustment methods assume independence of tests, which in cytokines studies translates to a questionable assumption that all cytokines operate independently; instead, cytokines form biological networks [21,22].

Taken together, this study suggests that women with endometriosis subphenotypes can be stratified molecularly. Although the determination of lesion heterogeneity has not yet formed part of the clinical decision-making process in endometriosis, subphenotype-specific cytokine signatures suggest that suitable targeted therapeutic approaches specific to each individual patient’s lesion and peritoneal heterogeneity composition may be tailored, and also the consideration of endometriosis subphenotypes for biomarker discovery studies. We anticipate our results to stimulate further studies, with accompanying detailed anatomical locations, and the use of genomic, proteomic, and metabolomic studies to evaluate the subphenotype molecular characteristics.

This study was funded by Singapore Ministry of Health’s National Medical Research Council (NMRC-OFYIRG16may012 and NMRC/CG/M003/2017 to Y.H. Lee) and Duke-NUS Academic Clinical Program Grant for Clinical and Translational Research in Endometriosis (to B.S.M.C.). 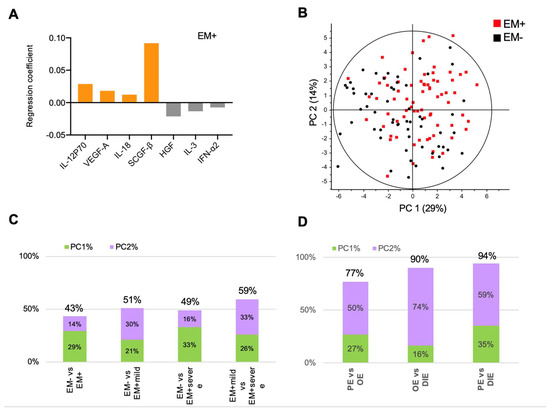 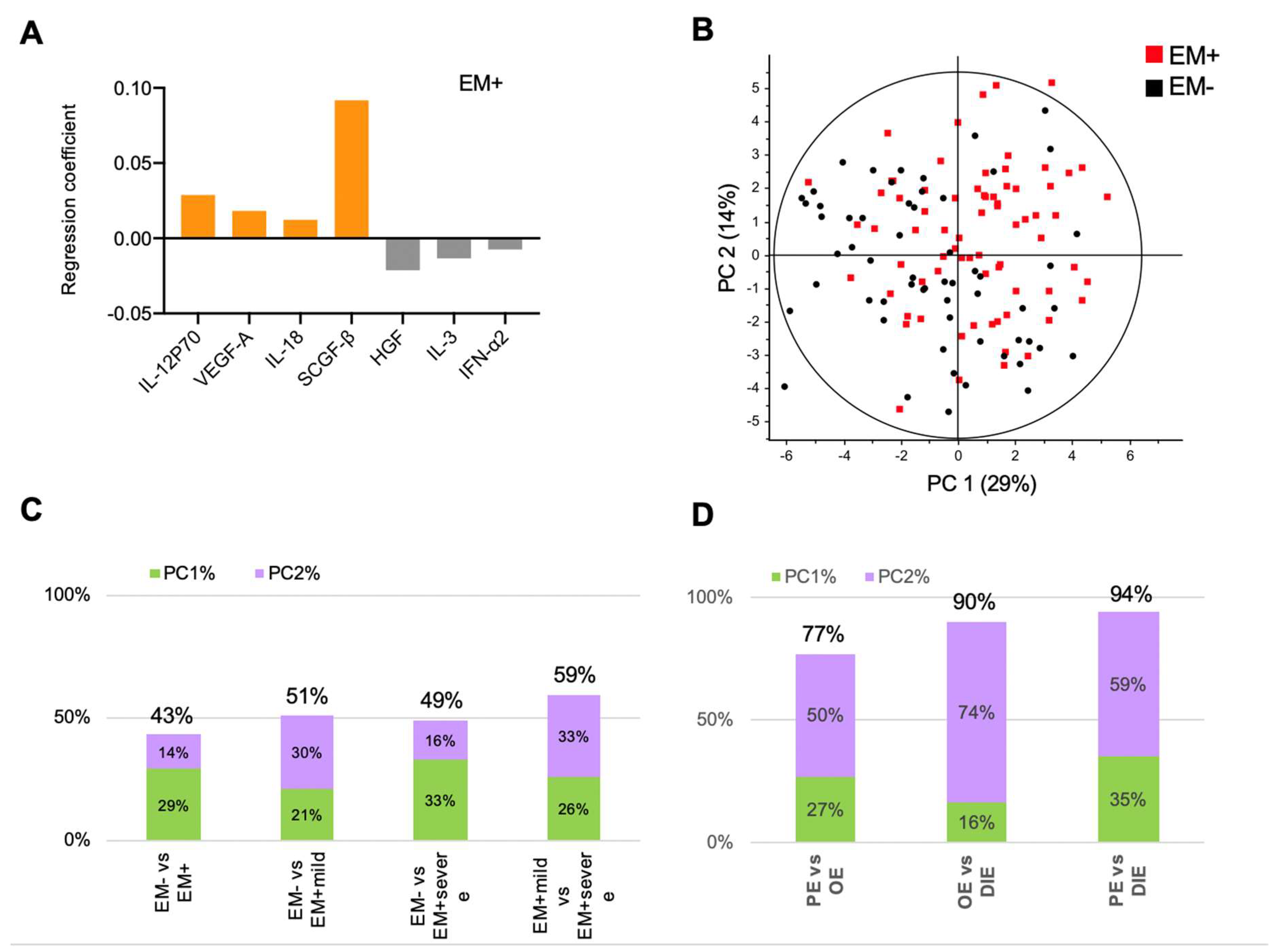 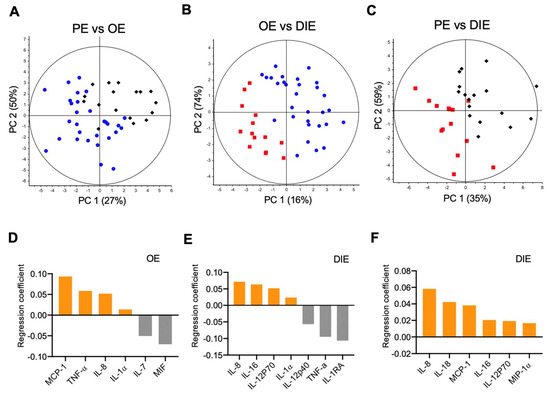 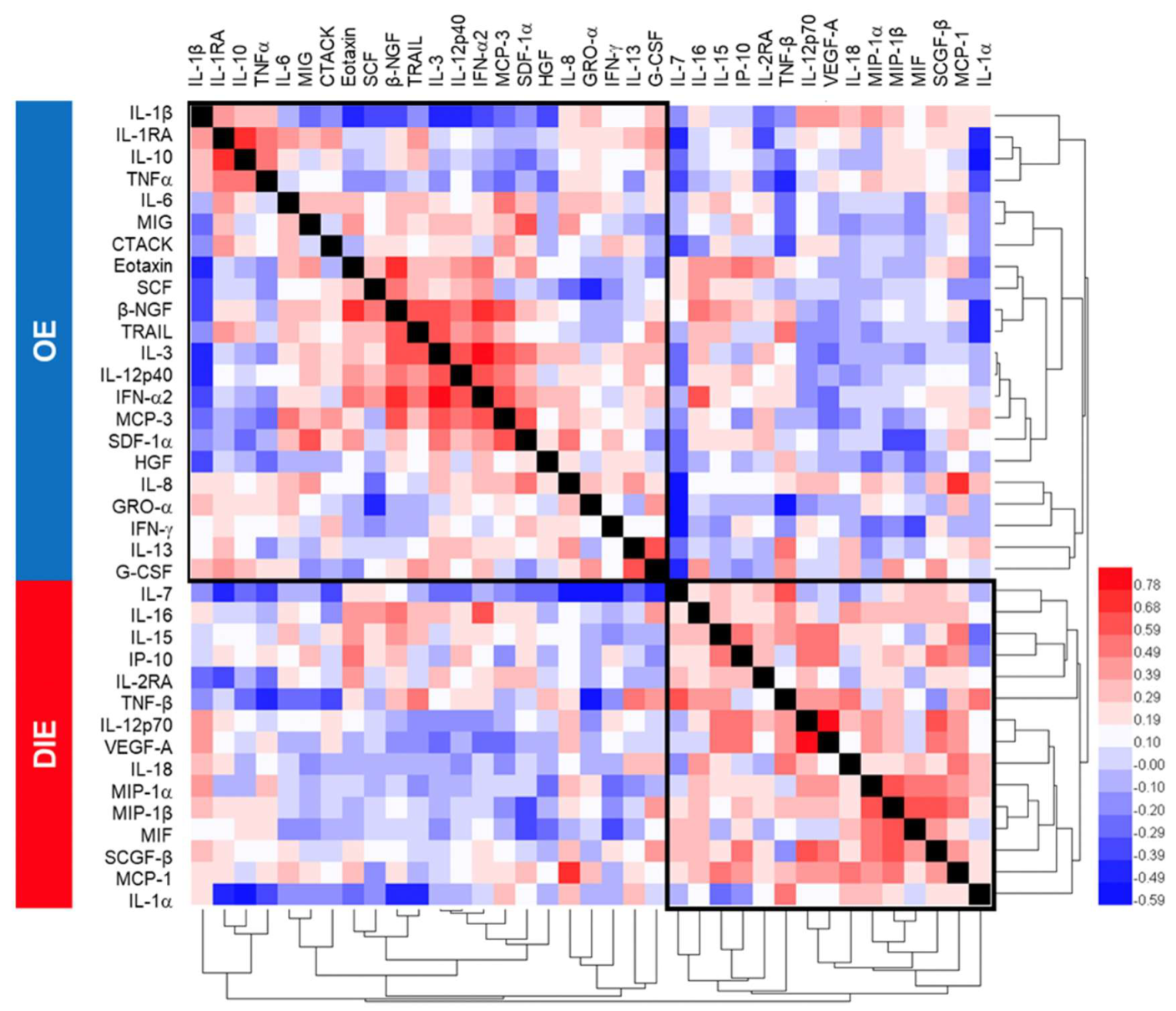