OsbZIP81, A Homologue of Arabidopsis VIP1, May Positively Regulate JA Levels by Directly Targetting the Genes in JA Signaling and Metabolism Pathway in Rice
Next Article in Special Issue

Mitochondria are one of the major sources of cellular energy in the form of adenosine triphosphate (ATP) and are known as signaling platforms, e.g., by producing reactive oxygen species (ROS) [1,2]. Thus, changes of mitochondrial function lead to the alteration of cellular differentiation and functions and consequently result in a variety of pathological conditions, including metabolic diseases, chronic inflammatory disease and aging [3]. Mitochondria contain over 1500 proteins that are encoded by the nuclear and the mitochondrial genome (mtDNA). The mtDNA is present in several copies in a mitochondrion, with the size of approximately 16 kilobases, and encodes only 37 genes, i.e., 13 oxidative phosphorylation (OXPHOS) complex protein-coding genes, 22 transfer RNA genes and two ribosomal RNA genes in mammals [4,5,6]. The mtDNA is polymorphic, and variations in the mtDNA link to mitochondrial functional alterations. The mtDNA variants, which are clinically relevant in humans, are categorized into three groups: (i) Recent maternally inherited deleterious mutations, (ii) ancient adaptive polymorphisms, and (iii) somatic mutations that accumulate during development and in tissues with age [7]. Deleterious mutations that cause classical mitochondrial diseases, such as Leigh syndrome and Leber’s hereditary optic neuritis, are well described. Ancient adaptive polymorphisms are utilized to determine mitochondrial haplogroup ancestry. Moreover, it has been reported that several ancient polymorphisms in the mtDNA have been associated with different susceptibility to common diseases, including chronic inflammation and metabolic diseases that result from mitochondrial dysfunctions as described above [3]. One of such examples is the polymorphism in the mitochondrially encoded cytochrome b gene (MT-CYB), which has been reported to be associated with middle-aged obesity in the Japanese population though the functional consequence of the variation in the MT-CYB gene that is yet to be elucidated [8].
During the last few decades, obesity has been spreading like an epidemic across the world. The World Health Organization reported that, globally, 1.9 billion adults were overweight and over 650 million were obese in 2016 [9]. Obesity itself is known to cause a persistent low-grade inflammatory state in metabolic tissues by producing pro-inflammatory mediators, such as leptin, interleukin (IL)-6, and TNF-α, and this condition is termed as “metaflammation”, which predisposes obese individuals to cardiovascular diseases, metabolic diseases, such as type 2 diabetes (T2DM), and chronic inflammatory disorders [10]. Therefore, identifying pathways controlling obesity is urgently warranted and has an impact on our society both medically and economically.
To date, mitochondrial dysfunctions [11,12,13] and dysbiosis in the gut [14,15,16] have been well-documented as pathologically contributing factors to metabolic disorders, including obesity. Recently, our group has shown experimental evidence that the natural variants in the mtDNA, which cause alterations in mitochondrial function, are associated with shifts in composition of gut microbiota in mice [17].
In this study, we found that mice carrying a maternally inherited polymorphism in the mt-Cytb in complex III (m.15124A>G, Ile-Val) demonstrated higher body weight at 12 months of age, and we investigated the functional consequences of the polymorphism on mitochondrial functions and the gut microbiota, which are known to be linked with obesity and age-related diseases.

2.1. Mice Carrying a Variant in the mt-Cytb Gene in the Mitochondrial Complex III Are Susceptible to Obesity

2.2. The Natural Single Variant at m.15124 in the mt-Cytb Gene in Mitochondrial Complex III Leads to the Higher Respiration Ex Vivo

There is growing evidence that composition of commensal bacteria in the gut has a strong impact on obesity in humans and mice [14,19]. Therefore, we analyzed the gut microbiota of C57BL/6J-mt129S1/SvlmJ and C57BL/6J mice using bacterial 16S ribosomal RNA gene next-generation sequencing (V1-V2 region) at different ages, i.e., young, middle, and old.
Alpha diversity of the gut microbiota from each group showed no significant difference (p > 0.05, Figure S3A), suggesting that the richness and evenness of gut microbial species between C57BL/6J-mt129S1/SvlmJ and C57BL/6J mice were comparable. Beta diversity, which represents the overlap or dissimilarity between multiple populations, was significantly different when using Bray–Curtis dissimilarity between strains at all age groups (adonis test: r2age = 0.05870, page = 0.0001; r2strain = 0.05655, pstrain = 0.0001; r2strain:age = 0.06154, pstrain:age = 0.0001; Figure 3A and Figure S3B), indicating the proportion of bacterial species was significantly different between the two strains at different ages.
Next, the inter-strain difference of commensal bacteria composition was evaluated (Figure 3B,C). The most abundant phyla in each group were Bacteroidetes and Firmicutes in all groups, as expected. Significant differences between the strains were identified as shown in Table 1. In all age groups, Proteobacteria was significantly more abundant in C57BL/6J-mt129S1/SvlmJ compared to C57BL/6J mice. At the family level, Desulfovibrionaceae was more abundant in young and old C57BL/6J-mt129S1/SvlmJ mice than C57BL/6J mice but not in the middle-aged mice. These data confirmed that the polymorphism at m.15124A>G in the mt-Cytb gene in mitochondrial complex III resulted in differential gut microbiota composition in mice, which is in line with our previous report [17].
The ratio of Firmicutes to Bacteroidetes, which was previously reported as an indicator of obesity [15,20], remained similar between the strains, irrespective of age (Mann–Whitney U test: pyoung = 0.1841, pmiddle = 0.5558, paged = 0.2736; uncorrected p-values).

Body weight determination and feeding experiment: Four-week-old mice were fed with a high fat diet (HFD, with 60% energy from fat, C1090-60, Altromin, Lage, Germany) over 8 weeks. Body weight was measured.
Lifespan study and determining age at death: 87 female C57BL/6J-mt129S1/SvlmJ, 87 female C57BL/6J, 84 male C57BL/6J-mt129S1/SvlmJ, and 68 male C57BL/6J mice were used to evaluate their lifespan, assuring a statistical power to detect a 10% difference in lifespan at a significance level of 0.05 and a power of 0.8 using G*Power [51]. Daily inspection of mice, the determination of moribund condition and the best available lifespan of mice, and the autopsy of moribund mice were performed as previously described [24,50,52].
Body composition assessment by nuclear magnetic resonance (NMR): Lean and fat mass in mice were determined using the benchtop NMR analyzer Minispec LF90 (Bruker Biospin MRI GmbH, Ettlingen, Germany), as previously described [53].
Indirect calorimetric cage analysis: Oxygen consumption, carbon dioxide production, food and water intake, and locomotor activity were continuously monitored using an open-circuit indirect calorimetry system (PhenoMaster SystemTM, TSE, Bad Homburg, Germany) as previously described [50].
Animal use and all procedures used in this study were approved by the local authority of the Animal Care and Use Committee (V242.7224.122-5, and 94-7/13, Kiel, Germany) and performed in accordance with the relevant guidelines and regulations by certified personnel.

Fecal samples were collected from 60 C57BL/6J mice (24 young, 17 middle-aged, and 19 old individuals) and 36 C57BL/6J-mt129S1/SvlmJ mice (18 young, 12 middle age, and 6 old individuals). Age groups were defined as young: 3 to 6 months old, middle age: 10 to 14 months old, and old: 24 to 26 months old.
DNA extraction from fecal samples and 16S rRNA gene sequencing was conducted as previously described [17]. In brief, the 16S rRNA gene was amplified using uniquely barcoded primers flanking the V1 and V2 hypervariable regions (27F-338R) with fused MiSeq adapters, and the PCR products were processed for the library preparation. The library was sequenced on the Illumina MiSeq platform with v3 chemistry using 2 × 300 cycles.

Raw sequencing reads were demultiplexed using bcl2fastq2 conversion software distributed by Illumina. Afterwards, reads were merged using fastq_mergepairs from VSEARCH package [57] version 1.9.9 with a maximum number of mismatches of 12 and the merged reads (contigs) between 270 and 330 bp long. Next, a quality filter step was applied as implemented in the fasta_filter command from the USEARCH [58] version 8.1.1861 with the expected numbers of errors set to 0.5. Chimeras were identified by uchime_ref (USEARCH) with the RDP Gold database version 9 as a reference database and were removed from the contig set. Subsequently, unique sequences were identified (derep_fulllength; VSEARCH) and sequences were clustered into operational taxonomic units (97% identity) using UPARSE [59] version 8.1.1861.
Taxonomy was assigned to genus level for all non-chimeric sequences using Mothur [60] version 1.36.1 and the SILVA database version 123 with 80% bootstrap support (1000 iterations). Sequences of non-bacterial origin were removed from the dataset, and remaining sequences were aligned to the 16S rRNA V1-V2 region against the SILVA database. Finally, FastTree [61] version 2.1.4 was utilized to construct a phylogenetic tree with a generalized time-reversible (GTR) substitution model and the gamma option to rescale branch length. The resulting tree was rooted using the midpoint method for rooting. OTUs present in only one individual with one contig (singletons) were removed, as well as OTUs with unclassified Phylum assignments. Next, 12,800 contigs were selected randomly per stool sample. This resulted in 2179 OTUs for further analysis.
Alpha and beta diversity analysis: Two alpha diversity indices (Chao1, Shannon) were estimated using the vegan [62] package version 2.5-3. Bray–Curtis dissimilarity (beta diversity) was estimated using the vegan package. To investigate differences in beta diversity, non-parametric analysis of variance was used as implemented in the adonis command (vegan package). To compute significance values for each factor, 9999 permutations were run. Principle coordinate analysis was performed using the ordinate command as implemented in the phyloseq [63] package version 1.26.1.
Statistical analyses for the microbiota study: Unless stated otherwise, all statistical analyses were performed using R [64] version 3.5.2. If not stated differently, correction for multiple testing was applied using the Benjamini–Hochberg method, as implemented in the p.adjust command (stats package for R).

5. Statistical Analysis for the Other Experiments

Gut microbiota sequencing data used for this study were submitted to the European Nucleotide Archive (ENA) and are available under the accession number PRJEB31300. 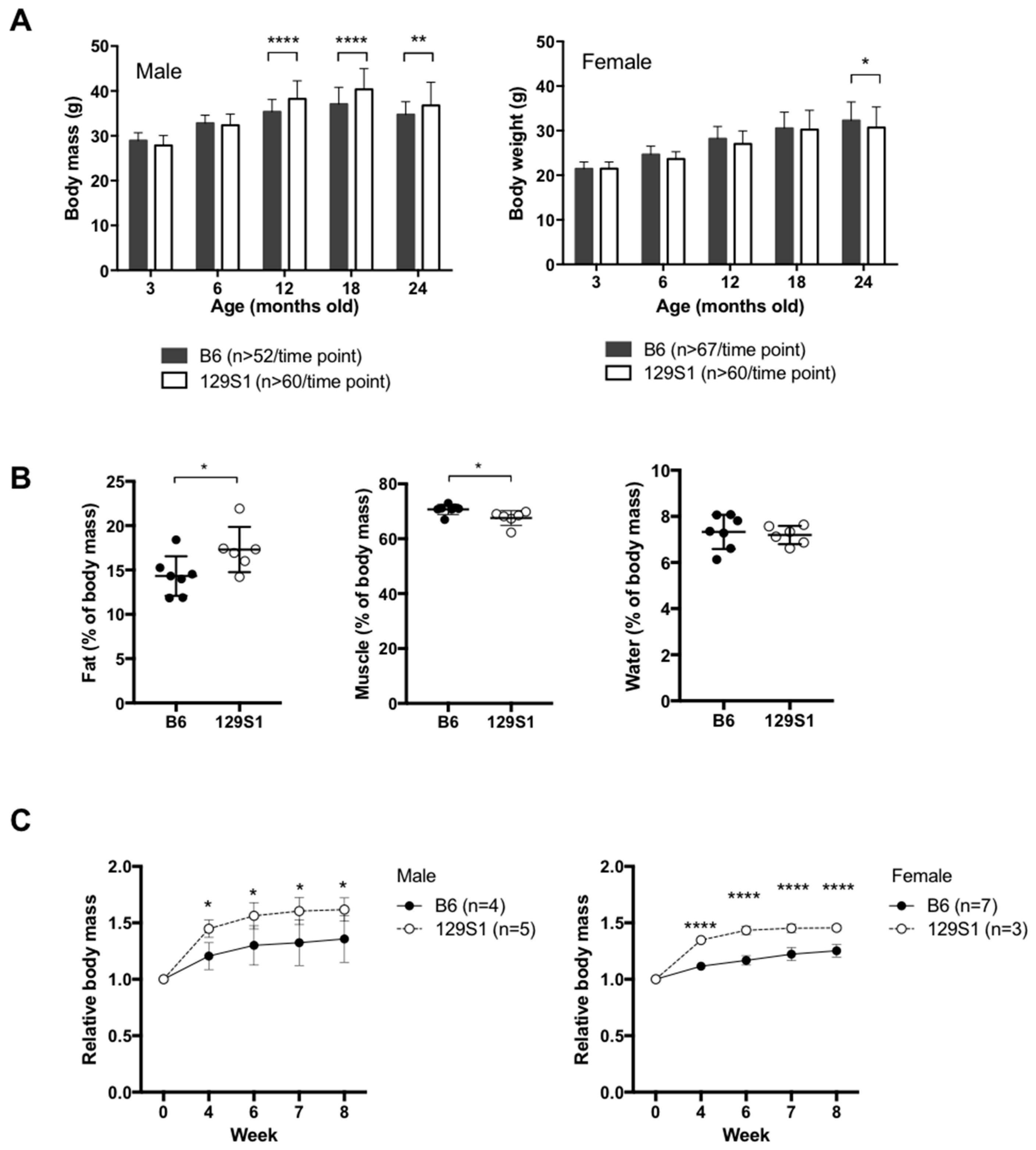 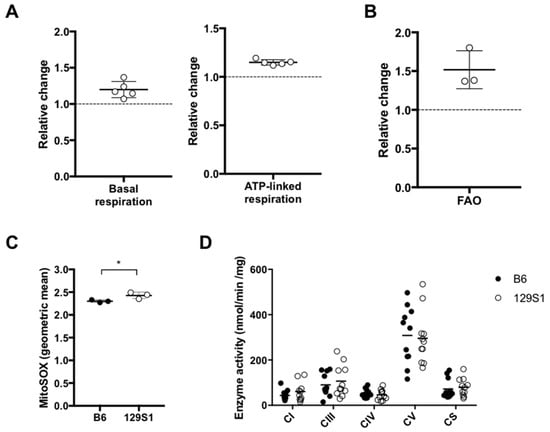 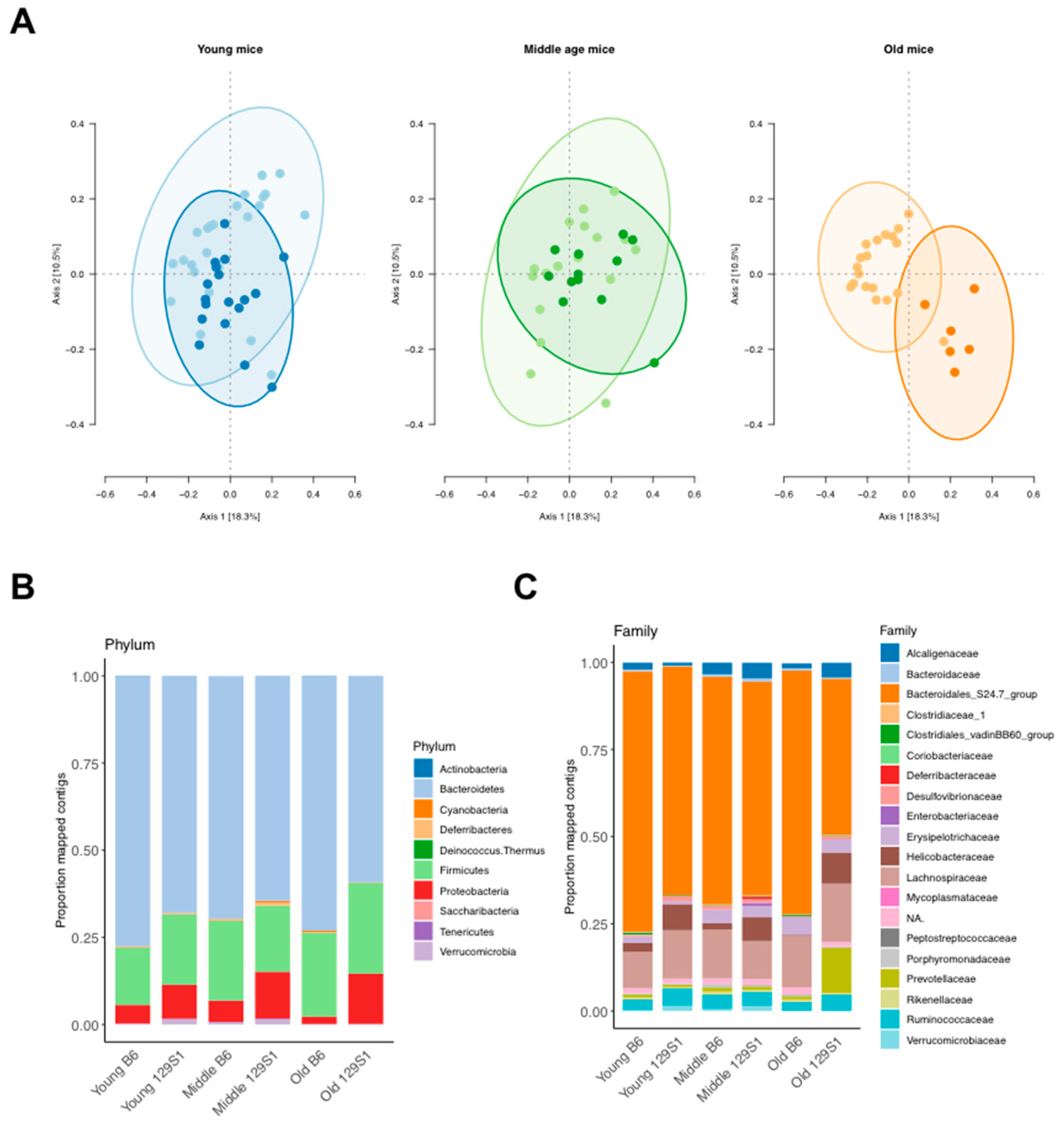