Xenobiotics Formed during Food Processing: Their Relation with the Intestinal Microbiota and Colorectal Cancer
Previous Article in Journal

The development of prebiotic fibers requires fast high-throughput screening of their effects on the gut microbiota. We demonstrated the applicability of a mictotiter plate in the in vitro fermentation models for the screening of potentially-prebiotic dietary fibers. The effects of seven rye bran-, oat- and linseed-derived fiber preparations on the human fecal microbiota composition and short-chain fatty acid production were studied. The model was also used to study whether fibers can alleviate the harmful effects of amoxicillin-clavulanate on the microbiota. The antibiotic induced a shift in the bacterial community in the absence of fibers by decreasing the relative amounts of Bifidobacteriaceae, Bacteroidaceae, Prevotellaceae, Lachnospiraceae and Ruminococcaceae, and increasing proteobacterial Sutterilaceae levels from 1% to 11% of the total microbiota. The fermentation of rye bran, enzymatically treated rye bran, its insoluble fraction, soluble oat fiber and a mixture of rye fiber:soluble oat fiber:linseed resulted in a significant increase in butyrate production and a bifidogenic effect in the absence of the antibiotic. These fibers were also able to counteract the negative effects of the antibiotic and prevent the decrease in the relative amount of bifidobacteria. Insoluble and soluble rye bran fractions and soluble oat fiber were the best for controlling the level of proteobacteria at the level below 2%. View Full-Text
Keywords: inulin; resistant starch; rye bran; fiber preparation; linseed; in vitro colon model; fecal fermentation inulin; resistant starch; rye bran; fiber preparation; linseed; in vitro colon model; fecal fermentation
►▼ Show Figures 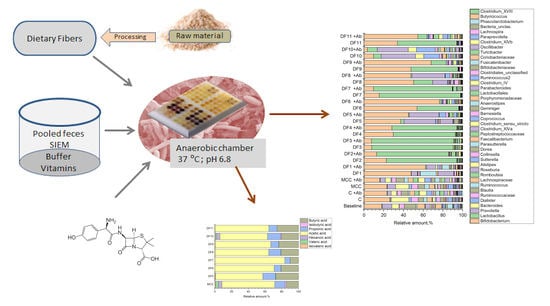