The Endocannabinoid/Endovanilloid System in Bone: From Osteoporosis to Osteosarcoma

Bone is a dynamic tissue, whose homeostasis is maintained by a fine balance between osteoclast (OC) and osteoblast (OB) activity. The endocannabinoid/endovanilloid (EC/EV) system’s receptors are the cannabinoid receptor type 1 (CB1), the cannabinoid receptor type 2 (CB2), and the transient receptor potential cation channel subfamily V member 1 (TRPV1). Their stimulation modulates bone formation and bone resorption. Bone diseases are very common worldwide. Osteoporosis is the principal cause of bone loss and it can be caused by several factors such as postmenopausal estrogen decrease, glucocorticoid (GC) treatments, iron overload, and chemotherapies. Studies have demonstrated that CB1 and TRPV1 stimulation exerts osteoclastogenic effects, whereas CB2 stimulation has an anti-osteoclastogenic role. Moreover, the EC/EV system has been demonstrated to have a role in cancer, favoring apoptosis and inhibiting cell proliferation. In particular, in bone cancer, the modulation of the EC/EV system not only reduces cell growth and enhances apoptosis but it also reduces cell invasion and bone pain in mouse models. Therefore, EC/EV receptors may be a useful pharmacological target in the prevention and treatment of bone diseases. More studies to better investigate the biochemical mechanisms underlining the EC/EV system effects in bone are needed, but the synthesis of hybrid molecules, targeting these receptors and capable of oppositely regulating bone homeostasis, seems to be a promising and encouraging prospective in bone disease management.
Keywords: CB1; CB2; TRPV1; bone; osteoporosis; osteosarcoma; osteoclasts; osteoblasts CB1; CB2; TRPV1; bone; osteoporosis; osteosarcoma; osteoclasts; osteoblasts

Despite its rigidity, bone can be defined as an extremely dynamic organ, in a constant remodeling process by osteoblasts (OBs) and osteoclasts (OCs), key cells in maintaining bone homeostasis and in answering to mechanical stresses [1,2]. Osteoclasts secrete acid and proteinases for cartilage resorption, whereas osteoblasts replace new bone and also influence the osteoclast activity. Osteoblasts express the receptor activator of nuclear factor Kappa-B ligand (RANK-L) which enhances osteoclastogenesis by binding its specific receptor (RANK) onto the osteoclast precursors’ surface. The binding between RANK receptor and its ligand leads to the recruitment of molecules, such as TNF receptor-associated factor 6 (TRAF6), with the consequent activation of MAPK cascade, NF-kB, AKT/PKB, JNK, ERK downstream signaling pathways, and the final expression of genes involved in osteoclastogenesis [3]. Osteoblasts also release osteoprotegrin (OPG), a soluble glycoprotein that acts as a “decoy” receptor binding to RANK-L and thus inhibiting osteoclast activation [4]. In 2016, Luo et al. identified a new receptor for RANK-L, LGR4, that binds RANK-L and suppresses RANK signaling [5]. Considering its crucial role in bone homeostasis, any deregulation in RANK/RANK-L signaling leads to pathological processes such as postmenopausal osteoporosis or cancer-induced bone destruction [6,7,8].
The endocannabinoid (EC) system is composed of endogenous cannabinoid ligands (anandamide (AEA) and 2-arachidonoylglycerol (2-AG)), their specific receptors, the cannabinoid receptor type 1 (CB1) and type 2 (CB2), and all the enzymes involved in their synthesis and degradation [9]. The endocannabinoids physiologically interact with several kinds of receptors, one of them being the transient receptor potential cation channel subfamily V member 1 (TRPV1) [10], a subfamily of Ca2+ permeable channel which constitutes the endovanilloid (EV) system. The EC/EV system is proven to be involved in the regulation of several physiological processes, such as appetite control, energy balance [11], pain perception [12], and immune response [13]. Moreover, it has been proposed as an anticancer target by several studies [14,15]. The CB1 receptor is more expressed in the central nervous system (CNS), whereas the CB2 receptor can be found predominantly in peripheral tissues [16], even though there is growing evidences indicating that it is also present in the brain [17,18]. In 2017, Liu et al. detected the CB2 receptor in various brain regions in a murine model with immunohistochemistry and in situ hybridization [19]. TRPV1 is a nociceptor predominantly expressed on sensory nerve fibers of the somatic and autonomic afferent neurons [20].
Bone cells express CB1 and CB2 receptors and TRPV1 channels and locally produce the endocannabinoids AEA and 2-AG and the enzymes involved in their synthesis and degradation [21,22,23,24]. The pharmacological modulation of these receptors contributes to the maintenance of bone mass by stimulating stromal cells and osteoblasts and by inhibiting monocytes and osteoclasts [25,26] (Figure 1). In particular, the inactivation of CB1 by its inverse agonist, AM251, or its genetic deletion, inhibits OBs’ differentiation from the bone marrow-derived cells, reducing a specific osteoblast transcription factor, runt-related transcription factor 2 (RUNX2) [27]. In addition, TRPV1 stimulation by its selective agonist, resiniferatoxin (RTX), reduces RUNX2, OPG, and alkaline phosphatase (ALP), inhibiting calcium deposition by osteoblasts. Conversely, CB2 stimulation by its selective agonist, JWH-133, inhibits the release of RANK-L, consequently reducing osteoclasts’ number and differentiation and leading to mineral deposition [23]. CB2 receptor stimulation acts as inductor of bone matrix deposition, whereas the TRPV1 receptor stimulation acts as inhibitor of osteogenic signaling. Moreover, RTX, in in vitro osteoclasts, is able to increase the expression and the activity of two important osteoclast biomarkers, tartrate-resistant acid phosphatase (TRAP) and cathepsin K. In particular, the very first evidence of TRPV1 expression in human osteoclasts was formulated in 2009, when the co-expression of TRPV1 and cannabinoid receptors in these cells was demonstrated [22]. While their co-expression in neuronal [28,29] and non-neuronal cells, such as HEK cells and mice osteoclasts and osteoblasts [10,30], had already been proven, it has never been proven before in human bone primary cells. The co-expression of these receptors and the fact that they can be stimulated by the same ligands give evidence of a cross-talk between EC and EV receptors. This interaction, especially between CB2 and TRPV1, is also evident in bone tissue where they oppositely modulate osteoblast and osteoclast activity [23,31].
The important evidence that cannabinoid and vanilloid receptors are co-expressed in mouse and human bone suggests that they might act together to balance the bone mineralization and resorption by different actions of AEA on TRPV1 and cannabinoid receptors.
On this basis, pharmacological modulation of the EC/EV system may be a valid approach in the prevention and treatment of bone diseases.

The EC/EV system also plays a role in modulating bone cancer pain in mice models [109]. The analgesic function of CB1 receptor is well known in the scientific community, however its stimulation induces psychoactive effects which limit the therapeutic application of CB1R ligands [81]. The discovery of the analgesic potential of CB2 stimulation is instead more recent [110,111,112]. In 2010, Curto-Reyes et al. demonstrated that the selective stimulation of CB2 receptor, by means of AM1241, a CB2-selective agonist extensively used in pre-clinical studies, inhibited tumor-derived pain in mice inoculated with NCTC 2472 osteosarcoma cell line [113]. This is strong evidence of CB2’s role in alleviating pain in OS animal models. The same year, Lozano-Ondoua et al. demonstrated that the administration of AM1241 in a murine model of osteolytic sarcoma inhibited bone cancer-induced pain as well as attenuated cancer-induced bone degradation, suggesting a single therapy for cancer-induced bone pain, bone loss, and bone fractures without inducing central nervous system side effects [114]. Considering that opiates, widely used to trait this type of pain, can enhance bone destruction, CB2 agonists could be a valid alternative. In addition, TRPV1 modulation is responsible for bone cancer pain alleviation, as Bao et al. demonstrated in 2015 in a bone cancer animal model (Wistar rat) [115]. Indeed, its expression levels are highly increased in bone cancer within dorsal root ganglion (DRG) neurons [116]. The topical application of Xiaozheng Zhitong Paste (XZP) causes a decrease in expression levels of EV receptor and the inhibition of PAR2 pathway, thus obtaining a reduction in cancer-induced pain. Moreover, Niiyama et al. obtained a similar result after the i.p. administration of I-RTX, a potent TRPV1 antagonist, in mice in whose femur they first implanted osteosarcoma cells [116].

Bone mass loss due to several reasons is still a striking health problem in today’s society.
Considering the involvement of EC/EV receptors in bone remodeling, one is likely to hypothesize that their pharmacological modulation could restore bone balance in all pathological conditions where an altered osteoblast/osteoclast activity is observed. The modulation of the EC/EV system seems to revert all the pro-osteoporotic effects induced by estrogen withdrawal in menopause, by glucocorticoids in glucocorticoid-induced OP, and by iron overload in thalassemia major.
Moreover, based on evidence from the most recent studies (e.g., CB2 and TRPV1 agonists have anti-proliferative, pro-apoptotic, and anti-invasive effects in the most frequent primary cancer affecting bone, namely, osteosarcoma), the EC/EV system could also be a very promising therapeutic target in primary bone tumor and in chemotherapy-induced osteoporosis.
Furthermore, targeting TRPV1 receptors could also be beneficial in reducing cancer pain, due to the well-known analgesic properties of TRPV1 stimulation in animal models with bone cancer pain. Therefore, pharmaceutical industries should consider investing in hybrid molecules able to stimulate CB2 receptors and, at the same time, desensitize or antagonize TRPV1 channels. These molecules are not psychoactive and therefore constitute a good therapeutic candidate in transitional studies that aim to validate the clinical use of CB2 and TRPV1 agonists in osteoporosis treatment. 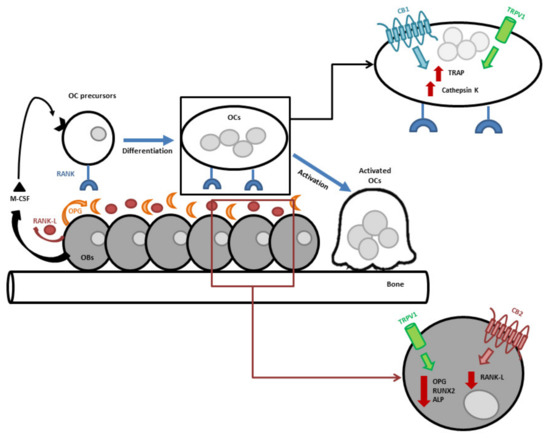 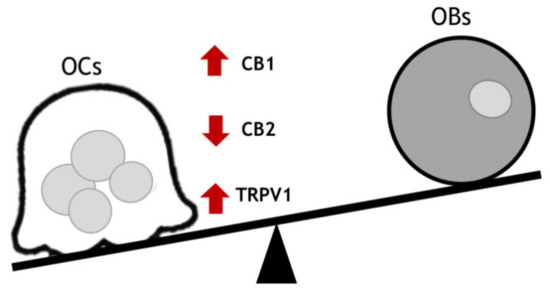 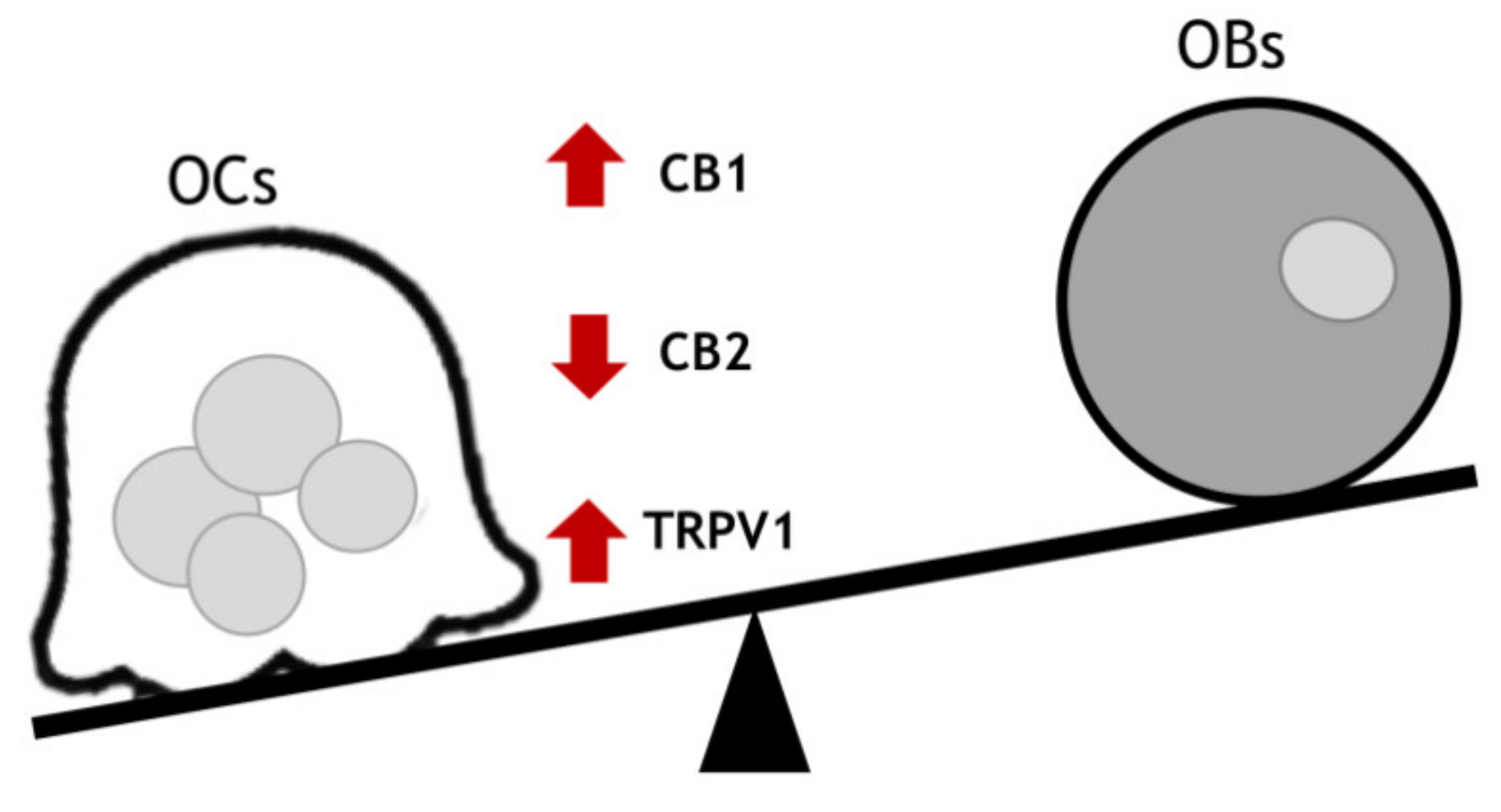