AqB013 and AqB050 compounds inhibit aquaporin 1 (AQP1), a dual water and ion channel implicated in tumour angiogenesis. We tested AqB013 and AqB050 either as monotherapy or in combination on tube formation of murine endothelial cells (2H-11 and 3B-11) and human umbilical vascular endothelial cells (HUVECs). The mechanism underlying their anti-tubulogenic effect was explored by examining cell viability, induction of apoptosis and migration using 3-(4,5-dimethylthiazol-2-yl)-5-(3-carboxymethoxyphenyl)-2-(4-sulfophenyl)-2H-tetrazolium (MTS) assay, Annexin V/propidium iodide apoptosis assay and scratch wound assay. Tube formation of all the cell lines was inhibited by AqB013, AqB050 and the combination of the two compounds. The inhibition of 2H-11 and 3B-11 was frequently accompanied by impaired migration, whereas that of HUVEC treated with AqB050 and the combination was associated with reduced cell viability due to apoptosis. AqB013 and AqB050 exhibited an anti-tubulogenic effect through inhibition of AQP1-mediated cell migration and induction of apoptosis. Together with previously reported anti-tumour cell effect of AqB013 and AqB050, our findings support further evaluation of these compounds as potential cancer therapeutics. View Full-Text
Keywords: aquaporin 1 (AQP1); angiogenesis; AqB013; AqB050; endothelial cells; apoptosis; migration aquaporin 1 (AQP1); angiogenesis; AqB013; AqB050; endothelial cells; apoptosis; migration
►▼ Show Figures 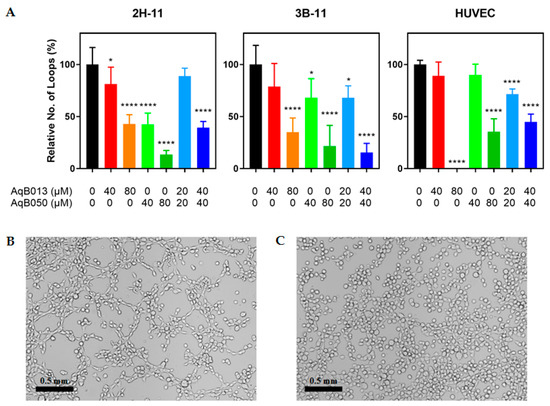