The Primary Causes of Muscle Dysfunction Associated with the Point Mutations in Tpm3.12; Conformational Analysis of Mutant Proteins as a Tool for Classification of Myopathies

Insights into Actin-Myosin Interactions within Muscle from 3D Electron Microscopy

Much has been learned about the interaction between myosin and actin through biochemistry, in vitro motility assays and cryo-electron microscopy (cryoEM) of F-actin, decorated with myosin heads. Comparatively less is known about actin-myosin interactions within the filament lattice of muscle, where myosin heads function as independent force generators and thus most measurements report an average signal from multiple biochemical and mechanical states. All of the 3D imaging by electron microscopy (EM) that has revealed the interplay of the regular array of actin subunits and myosin heads within the filament lattice has been accomplished using the flight muscle of the large water bug Lethocerus sp. The Lethocerus flight muscle possesses a particularly favorable filament arrangement that enables all the myosin cross-bridges contacting the actin filament to be visualized in a thin section. This review covers the history of this effort and the progress toward visualizing the complex set of conformational changes that myosin heads make when binding to actin in several static states, as well as the fast frozen actively contracting muscle. The efforts have revealed a consistent pattern of changes to the myosin head structures as determined by X-ray crystallography needed to explain the structure of the different actomyosin interactions observed in situ. View Full-Text
Keywords: striated muscle; image reconstruction; muscle physiology striated muscle; image reconstruction; muscle physiology
►▼ Show Figures 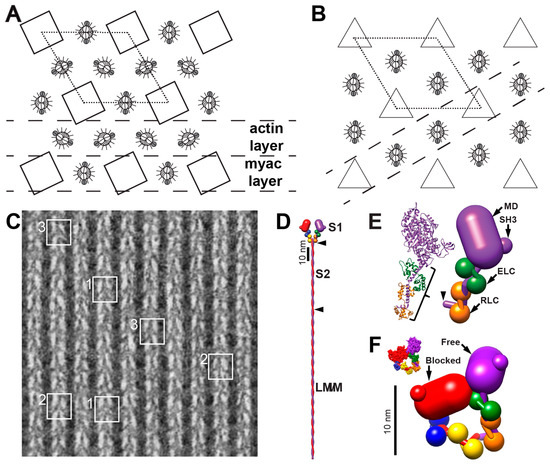