:
The Human immunodeficiency virus-1 (HIV-1) matrix (MA) domain is involved in the highly regulated assembly process of the virus particles that occur at the host cell’s plasma membrane. High-resolution structures of the MA domain determined using cryo X-ray crystallography have provided initial insights into the possible steps in the viral assembly process. However, these structural studies have relied on large and frozen crystals in order to reduce radiation damage caused by the intense X-rays. Here, we report the first X-ray free-electron laser (XFEL) study of the HIV-1 MA domain’s interaction with inositol hexaphosphate (IP6), a phospholipid headgroup mimic. We also describe the purification, characterization and microcrystallization of two MA crystal forms obtained in the presence of IP6. In addition, we describe the capabilities of serial femtosecond X-ray crystallography (SFX) using an XFEL to elucidate the diffraction data of MA-IP6 complex microcrystals in liquid suspension at ambient temperature. Two different microcrystal forms of the MA-IP6 complex both diffracted to beyond 3.5 Å resolution, demonstrating the feasibility of using SFX to study the complexes of MA domain of HIV-1 Gag polyprotein with IP6 at near-physiological temperatures. Further optimization of the experimental and data analysis procedures will lead to better understanding of the MA domain of HIV-1 Gag and IP6 interaction at high resolution and will provide basis for optimization of the lead compounds for efficient inhibition of the Gag protein recruitment to the plasma membrane prior to virion formation.
Keywords:
Serial Femtosecond X-ray crystallography; human immunodeficiency virus; matrix protein; inositol hexaphosphate; ambient temperature

For the SFX experiments, the hanging drop crystallization conditions were optimized to favor the formation of microcrystals by increasing the number of drops to 15–20 per coverslide. After harvesting in the same mother liquor, microcrystals were pooled, and suspensions were pre-filtered through a 40 μm nylon mesh filter to remove large particles and aggregates (Figure 4). The final sample slurry contained a crystalline mixture of 1 × 1 × 5 μm3 to 5 × 5 × 15 μm3 size range which is measured by light microscopy. Crystals were kept at 293 K before being introduced into the LCLS beam in a thin liquid jet using the coMESH injector (Figure 3) at flow rates between 1–3 μL/min. A total of 500 μL sample used for each dataset. The sheath liquid contained the mother liquor, but a 20% v/v of MPD was added, and was charged between 3–5 kV, and flowrates varied between 1–3 μL/min in order to maintain jet stability and maximize the hit rate while monitoring with OnDa software [46]. The 40 femtosecond X-rays pulses intercepted the continuous jet at 120 Hz, with a pulse energy between 2–3 mJ at a wavelength of 9.5 keV.
Diffraction data were recorded using a Cornell–SLAC pixel array detector (CSPAD) detector [47]. In total, 180,612 (12%) potential crystal hits were identified from 1,530,202 diffraction patterns using crystallography software called Psocake [48,49]. Diffraction was observed to a resolution beyond 3.5 Å (Figure 5).

The observed lower-than-expected resolution of the HIV-1 MA - IP6 complex may be accounted for, in part, by the treatment of microcrystals in the particular experimental set up available at the time of the experiment. Relatively large size crystals up to 5 × 5 × 15 μm3 compared to 1 × 1 μm2 beam size and high background due to low dynamic range of CSPAD detector could potentially increase the background while lowering the signal quality. Potentially, many factors can affect the data quality of an SFX experiment. A large unit cell size and limited number of crystal contact points with a high solvent content can lead to a more physically delicate crystal, which can be damaged when transferred into reservoirs or passed through filters[42]. Samples can also suffer incompatibility with the injection method and the sample environment. These potential shortcomings were not screened for in this experiment which simply served as a proof-of concept. From prior experiences, the authors suspect that growing these large crystals and harvesting them from plates to reservoirs, can clearly show visible crystal degradation such as jagged edges, clumps, bent crystals, etc., leading to poor diffraction data. Indeed, crystals had been subjected to continuous pipetting to remove them from the glass cover slides which caused mechanical shearing forces before injection across the LCLS beam. These repeated physical contacts with crystals can damage the packing arrangement of the delicate MA-IP6 complexes in the crystal lattice, introduce additional mosaicity to the crystals and thereby lower the resolution limit. During beamtime, large numbers of 54,178 diffraction patterns for MA-IP6 rod and 126,434 diffraction patterns for MA-IP6 triangle crystals had been recorded (Table 1). To obtain the final sample slurry, hundreds of microliter size drops have been combined and this pooling process most likely caused heterogeneity and non-isomorphism in unit cell parameters. Despite our exhaustive efforts non-isomorphic unit cell parameters so far precluded the successful merging of the data to recover electron density. Future experiments will employ a gentler batch method in combination with density gradient separation of microcrystals by size rather than filtering, to improve resolution and lower the non-isomorphism to streamline the downstream data processing [23]. Crystallization protocols can also be optimized, including the examination of different crystal forms and geometries to determine the optimum shape and size of the microcrystals for future SFX studies, thereby eliminating the need for filtering.
Most of the temperature dependent dynamics such as rotation and conformational flexibility of the side chains of the proteins are captured in frozen conformations at cryogenic temperatures. This impedes the understanding of binding dynamics of the HIV-1 MA-IP6 complex such as the order of formation of H-bonds, and coupled structural conformational changes will remain unclear. Furthermore, the requirement of synchrotron X-ray crystallography for large crystals hampers the structure of HIV-1 MA-IP6 complex in the different intermediate states of the binding process that might limit the crystal growth. Often, larger crystals need to be frozen at very low temperatures that also increase mosaicity and lower resolution with increasing radiation damage that negatively impact the quality of diffraction data. However, recent upgrades in microfocus synchrotron beamlines optics and direct photon count pixel detectors allow data collection from as small as 1-micron size crystals; however, this method still necessitates cryocooling. The dynamic structure of the HIV-1 Gag MA domain and its complexes with IP6 would have significant advantage for structural studies at temperatures closer to the physiological condition in which these processes take place.

4.1. Cloning and Overexpression of the HIV-1 Gag MA Domain

Purified HIV-1 Gag MA proteins were then used in co-crystallization with IP6 at room temperature by the hanging-drop method using a crystallization buffer containing 20% polyethylene glycol 3350 (PEG 3350) as precipitant and 100 mM MES-NaOH pH 6.5. Microcrystals were harvested in the same mother-liquor composition, pooled to a total volume of 3 mL (a representative hanging drop is seen in Figure 4C) and filtered through 40-micron Millipore mesh filter (Figure 4D). The concentration of crystal was around 1010–1011 per milliliter viewed by light microscopy.

An average of 2.64 mJ was delivered in each 40-fs pulse that contained approximately 1012 photons with 9.51 keV photon energy with 1 × 1 μm2 focus of X-rays. Single-pulse diffraction patterns from HIV-1 MA-IP6 microcrystals were recorded at 120 Hz on a CSPAD [47] detector positioned at a distance of 217 mm from the interaction region.

4.4. Injection of HIV-1 MA-IP6 Microcrystals into an XFEL and Diffraction Data Collection

A crystalline slurry of HIV-1 MA-IP6 microcrystals kept at room temperature flowing at 2 µL/min was injected into the interaction region inside the front vacuum chamber of the LCLS CXI instrument using the coMESH injector (Figure 3). Due to the presence of large crystals in the MA-IP6 samples, prior to the experiment, the coMESH injector required a filtered sample before injection through a 100-micron inner diameter capillary size to prevent clogging.

CrystFEL’s indexamajig program [50] was used to index the crystal hits. Two rounds of indexing were performed on each of the datasets. Initial indexing results indicated that the space group was most likely hexagonal P6 with a = 96.55 Å, b = 96.78 Å, c = 91.02Å and α = β = 90°, γ = 120°. Given the target unit cell, the indexing results were accepted if the unit cell lengths and angles were within 5% and 1.5°, respectively (Table 2). The final iteration yielded 25,501 (47%) and 56,861 (45%) indexed patterns for MA-IP6 ROD and MA-IP6 TRIANGLE, respectively. Representative patterns are shown in Figure 5. Figures of merit for merged intensities CC1/2 and Rsplit for MA-IP6 Rod and MA-IP6 Triangle are shown in Figure 6. The merged intensities were symmetrized with point group 6/mmm and the estimated resolution is around 3.3 Å.

Diffraction patterns of MA-IP6 microcrystals were recorded beyond 3.5 Å resolution. It was possible to determine the unit-cell parameters using Psocake [48,49]and the CrystFEL [51,52] software suites. The unit-cell parameters could be estimated (Figure 5). These results demonstrate the feasibility of conducting HIV-1 MA-IP6 complex structural studies using XFELs, which hold great promise for a more comprehensive understanding of MA and IP6 interaction by performing time-resolved studies unique to XFELs, in which structural intermediates may be imaged. Recent SFX studies of an adenine riboswitch aptamer domain mixed with its substrate immediately prior to probing captured dynamics of the reaction at ambient temperature and revealed conformational changes that also induced a conversion of the space group in crystallo [53]. Such findings indicate that mix-and-probe time-resolved SFX can offer opportunities to probe macromolecular complexes using microcrystals, either as static structures or as they undergo biologically relevant reactions.

H.D., H.I.C., and M.F. designed and coordinated the project. H.I.C., H.T., K.K., and F.Y. established the protein expression and purification method for the crystallization. T.S. supervised the crystallographic experiment. H.D. and H.I.C prepared and characterized the samples. H.D., C.H.Y. and Z.S. analyzed data. R.G.S., H.D. and H.I.C. built the co-MESH injector, helped with data collection. R.G.S., and M.L. prepared the beamline and ran the CXI instrument. H.D., M.F., H.I.C., and M.O. wrote the manuscript with input from all of the authors.

This This research was funded in part by NSF Science and Technology Center grant NSF-1231306 (Biology with X-ray Lasers, BioXFEL). A Grant-in-Aid for Scientific Research (C) from the Japanese Society for the Promotion of Science (JSPS) (17K08861), Grant-in and Aid for JSPS Research Fellow (17J11657), and the Platform for Drug Discovery, Informatics, and Structural Life Science (Ministry of Education, Culture, Sports, Science and Technology (MEXT), Japan Agency for Medical Research and Development (AMED)) and Basis for Supporting Innovative Drug Discovery and Life Science Research from Japan Agency for Medical Research and Development (AMED).

Portions of this research were carried out at the Linac Coherent Light Source (LCLS) and Stanford Synchrotron Radiation Lightsource (SSRL) at the SLAC National Accelerator Laboratory. Use of the LCLS and SSRL is supported by the U.S. Department of Energy (DOE), Office of Science, Office of Basic Energy Sciences (OBES) under Contract No. DE-AC02-76SF00515. The LCLS is acknowledged for beam time access under experiment no. cxils9717. Parts of the sample injector used at LCLS for this research were funded by the National Institutes of Health, P41GM103393, formerly P41RR001209. H.D. acknowledges valuable discussions with Aiko Takeuchi, Kenji Dursuncan, Emi Satunaz and Michelle Young. We thank Gregory Stewart of the SLAC National Accelerator Laboratory for excellent technical assistance with creating graphics for Figure 3. 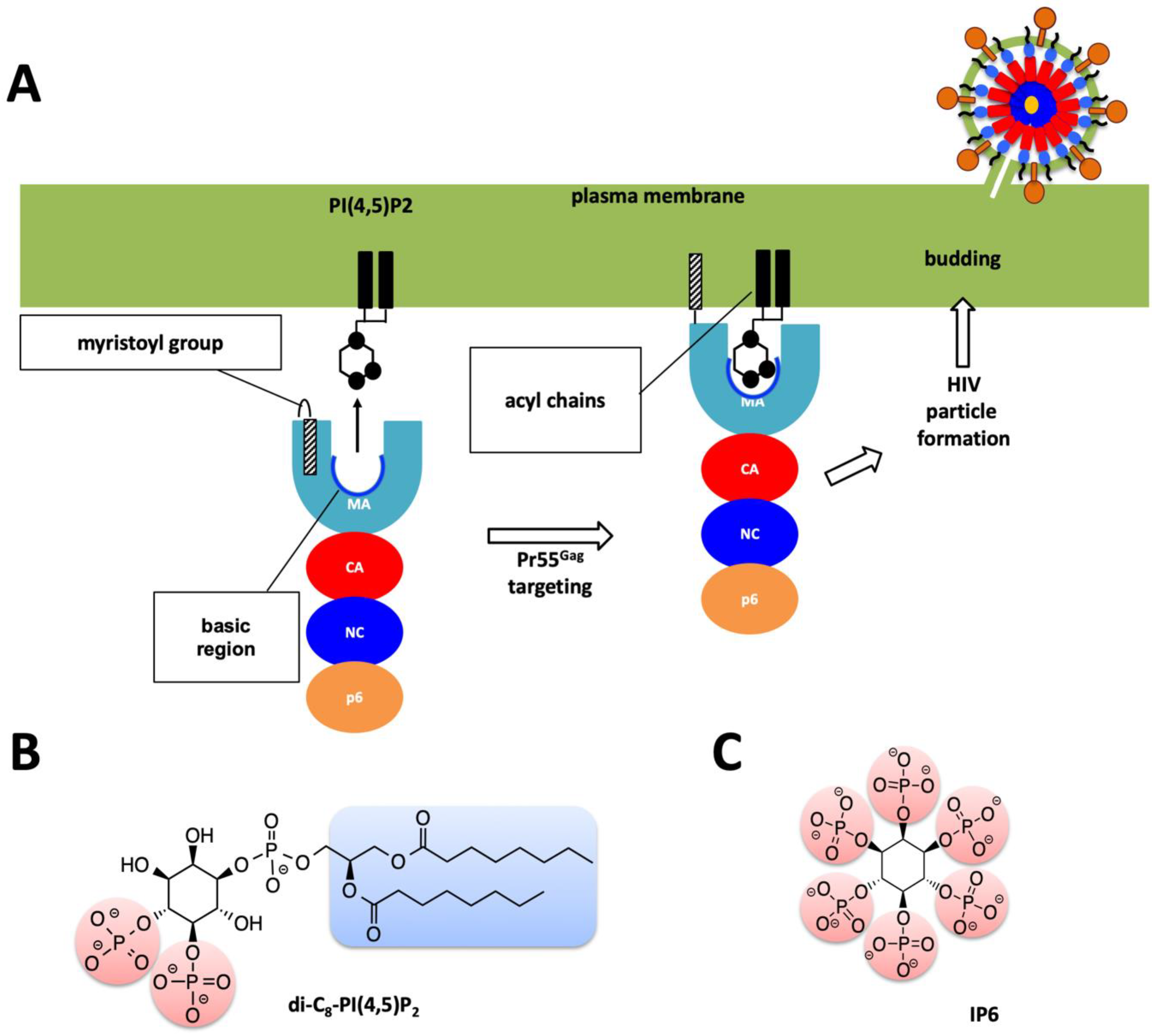 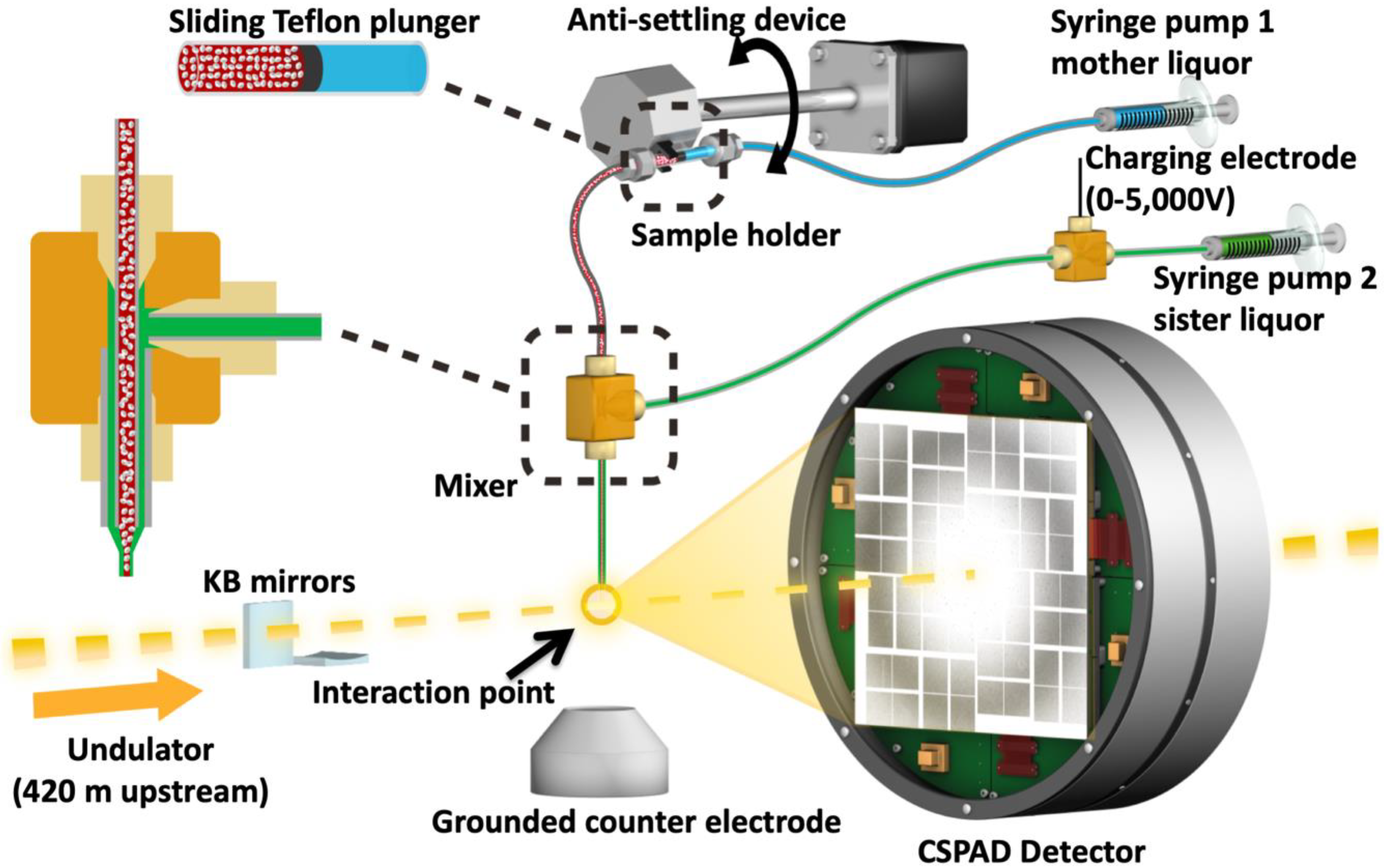 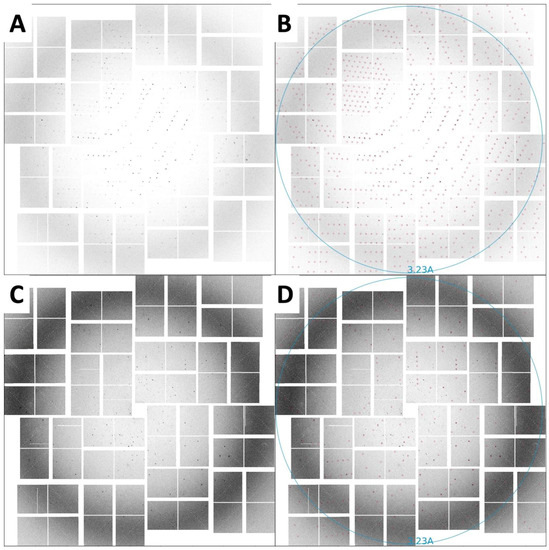 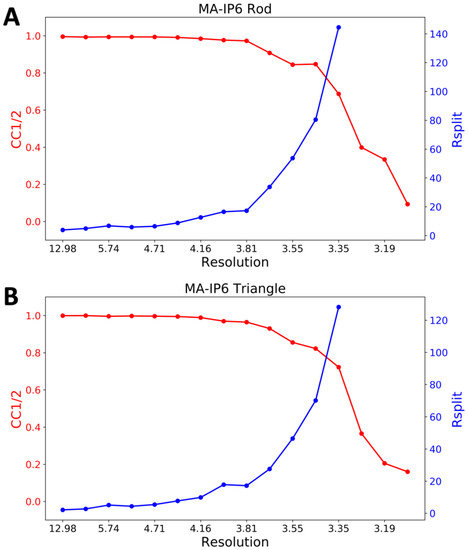 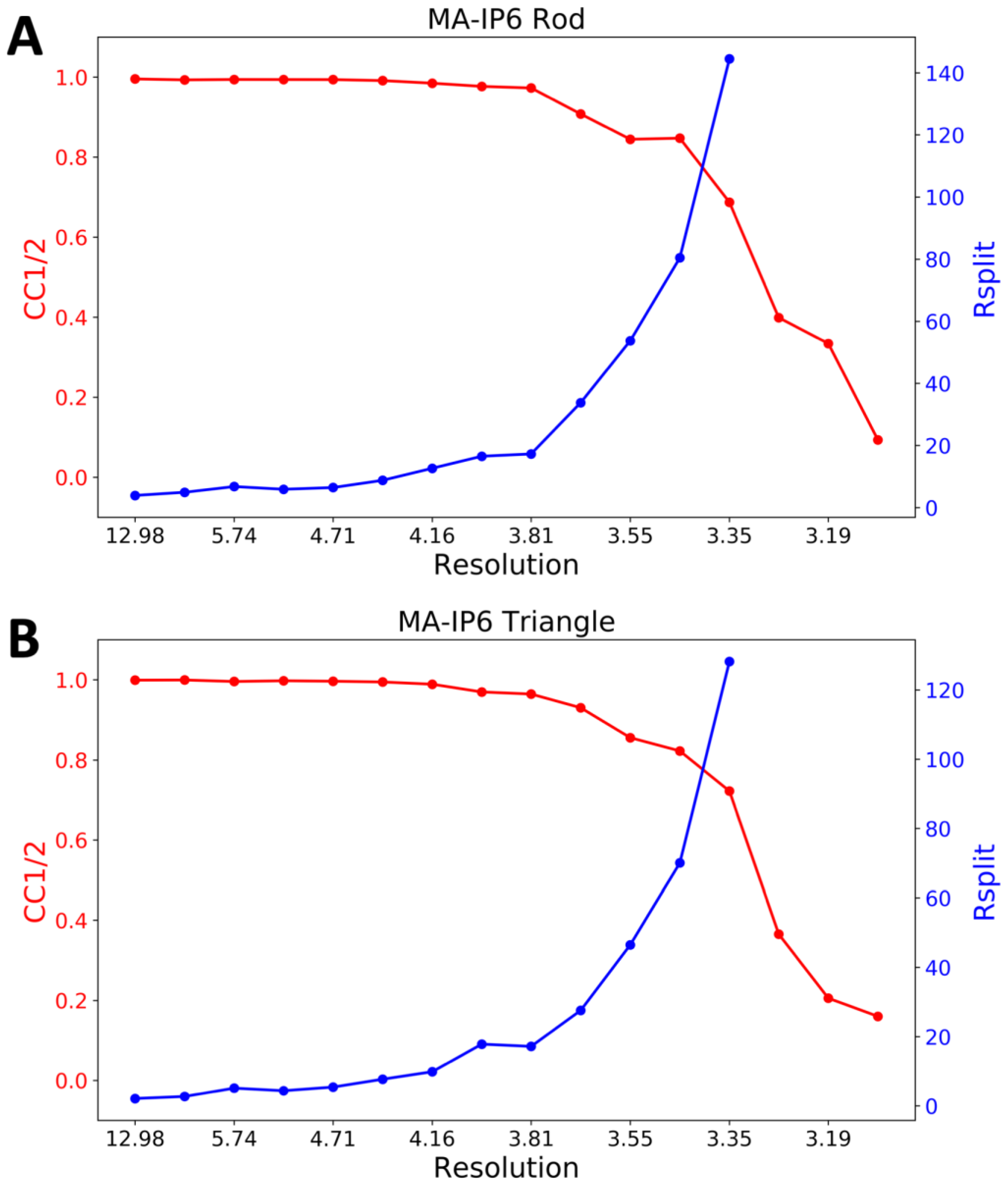 Table 2. CrystFEL indexing parameters.
Table 2. CrystFEL indexing parameters.
We use cookies on our website to ensure you get the best experience. Read more about our cookies here.
Accept
We have just recently launched a new version of our website. Help us to further improve by taking part in this short 5 minute survey here. here.
Never show this again