Adiponectin in Myopathies
Next Article in Special Issue

The Olfactory System of Zebrafish as a Model for the Study of Neurotoxicity and Injury: Implications for Neuroplasticity and Disease
Previous Article in Journal

The effects of thyroid hormone disrupting chemicals (THDCs) on eye development of zebrafish were investigated. We expected THDC exposure to cause transcriptional changes of vision-related genes, which find their phenotypic anchoring in eye malformations and dysfunction, as observed in our previous studies. Zebrafish were exposed from 0 to 5 days post fertilization (dpf) to either propylthiouracil (PTU), a thyroid hormone synthesis inhibitor, or tetrabromobisphenol-A (TBBPA), which interacts with thyroid hormone receptors. Full genome microarray analyses of RNA isolated from eye tissue revealed that the number of affected transcripts was substantially higher in PTU- than in TBBPA-treated larvae. However, multiple components of phototransduction (e.g., phosphodiesterase, opsins) were responsive to both THDC exposures. Yet, the response pattern for the gene ontology (GO)-class “sensory perception” differed between treatments, with over 90% down-regulation in PTU-exposed fish, compared to over 80% up-regulation in TBBPA-exposed fish. Additionally, the reversibility of effects after recovery in clean water for three days was investigated. Transcriptional patterns in the eyes were still altered and partly overlapped between 5 and 8 dpf, showing that no full recovery occurred within the time period investigated. However, pathways involved in repair mechanisms were significantly upregulated, which indicates activation of regeneration processes. View Full-Text
Keywords: PTU; TBBPA; mode of action; pathways of toxicity; microarray; transcriptome analyses PTU; TBBPA; mode of action; pathways of toxicity; microarray; transcriptome analyses
►▼ Show Figures 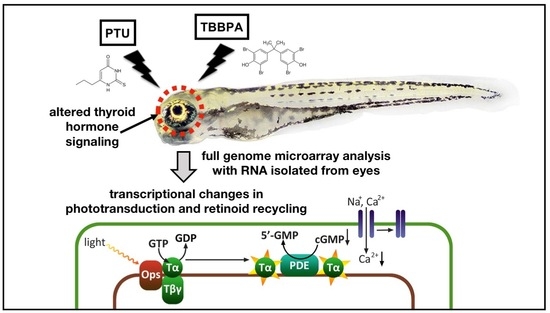