Role of Serotonergic System in the Antidepressant Actions of mGlu2/3 Receptor Antagonists: Similarity to Ketamine
Previous Article in Special Issue

Osmotic Demyelination: From an Oligodendrocyte to an Astrocyte Perspective

Ischemic stroke causes rapid hypoxic damage to the core neural tissue which is followed by graded chronological tissue degeneration in the peri-infarct zone. The latter process is mainly triggered by neuroinflammation, activation of inflammasomes, proinflammatory cytokines, and pyroptosis. Besides microglia, astrocytes play an important role in the fine-tuning of the inflammatory network in the brain. Lipocalin-2 (LCN2) is involved in the control of innate immune responses, regulation of excess iron, and reactive oxygen production. In this study, we analyzed LCN2 expression in hypoxic rat brain tissue after ischemic stroke and in astrocyte cell cultures receiving standardized hypoxic treatment. Whereas no LCN2-positive cells were seen in sham animals, the number of LCN2-positive cells (mainly astrocytes) was significantly increased after stroke. In vitro studies with hypoxic cultured astroglia revealed that LCN2 expression is significantly increased after only 2 h, then further increased, followed by a stepwise decline. The expression pattern of several proinflammatory cytokines mainly followed that profile in wild type (WT) but not in cultured LCN2-deficient astrocytes. Our data revealed that astrocytes are an important source of LCN2 in the peri-infarct region under hypoxic conditions. However, we must also stress that brain-intrinsic LCN2 after the initial hypoxia period might come from other sources such as invaded immune cells and peripheral organs via blood circulation. In any case, secreted LCN2 might have an influence on peripheral organ functions and the innate immune system during brain hypoxia. View Full-Text
Keywords: astrocyte; hypoxia; lipocalin-2; neuroinflammation astrocyte; hypoxia; lipocalin-2; neuroinflammation
►▼ Show Figures 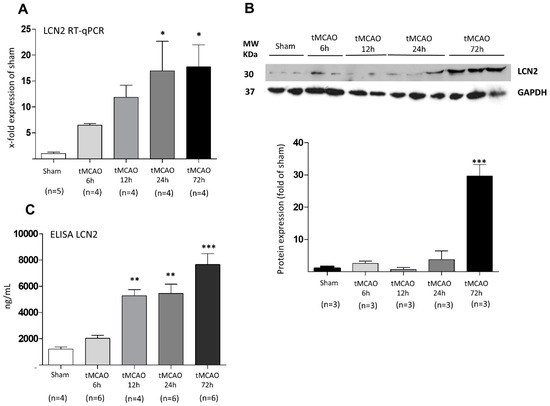