The Novel Perspectives of Adipokines on Brain Health

Inflammation is one of the major pathological causes implicated in the development of obesity and its related metabolic disorders [1,2,3]. Chronic inflammation triggered by over-nutrition results in perturbation of the activity of hypothalamic neurons, which govern the whole-body energy balance [4,5,6]. Recent studies report that microglia, the resident macrophages of the central nervous system (CNS), respond to the elevation of saturated free fatty acid (FFA) following consumption of the fat-rich diet and thereby trigger the hypothalamic inflammation [6]. This results in abnormal functioning of the neuronal circuit that controls the energy homeostasis.
Adiponectin, an adipokine derived from adipose tissue, has been reported as beneficial in alleviating multiple physiological disturbances [7,8,9]. It helps in alleviating a variety of metabolic diseases by ameliorating the cellular stresses including inflammation, oxidative stress, and endoplasmic reticulum stress [7,8,10,11,12]. Although, a recent study identified an anti-inflammatory effect of adiponectin in the CNS [11], the role of adiponectin in rectifying the hypothalamic inflammation during early over-nutrition period remains elusive. Therefore, this study was aimed at identification of the contribution of adiponectin in regulating the hypothalamic inflammation and the microglial function. We evaluated the inflammatory responses and microglial activation utilizing mice model treated for a short-term with fat-rich diet and a microglial cell line treated with a saturated FFA. In crux, the current study unravels the potential contribution of adiponectin in preventing the initiation of inflammatory response in the hypothalamic microglial cells in an early stage of obesity development.

In order to verify if adiponectin exerts anti-inflammatory effect in the hypothalamus during the early over-nutrition period, we evaluated the pattern of the hypothalamic inflammation after treatment with high fat diet (HFD) for 4 weeks combined with the systemic administration of globular adiponectin, which has a more potent effect on their identified functions [13]. In line with the previous finding that identified a reduction in circulating adiponectin level during short-term exposure to a fat-rich diet [13], we also confirmed a reduction in adiponectin mRNA level in epididymal white adipose tissue (eWAT) 4 weeks after high-fat diet treatment (Figure 1A). In accordance with the previous reports, we observed that HFD treatment resulted in a drastic increase in the expression levels of mRNA encoding inflammatory cytokines such as IL-1β (Figure 1B), IL-6 (Figure 1C), TNF-α (Figure 1D) as well as Cox-2 gene (Figure 1E), the rate-limiting enzyme involved in the synthesis of the prostaglandin E2, which controls the cellular inflammatory process. This elevation of mRNA levels was effectively reversed by a systemic treatment with adiponectin for five days. Furthermore, we observed that an elevation in the levels of hypothalamic Iba-1 and CD11b mRNA, the molecular markers of microglia, in HFD-treated group was almost completely rescued by the systemic treatment with adiponectin (Figure 1F,G). These findings suggest that adiponectin treatment exerts anti-inflammatory effects on the hypothalamus following short-term HFD exposure, at least in part, via targeting the microglial cells.

In order to further verify anti-inflammatory functions of adiponectin, we evaluated the phosphorylation of ERK, a molecular component of intracellular signal transduction in the inflammatory signaling pathway [18,19], and the level of IkB-α protein, which inhibits the activity of NF-κB transcription factor regulating the expression of multiple inflammatory cytokines [20]. As shown in the Figure 4, adiponectin reversed the palmitic acid-induced phosphorylation of ERK (Figure 4A) and degradation of IkB-α (Figure 4B). These observations suggest that adiponectin treatment suppresses the microglial inflammation in response to saturated FFA, at least in part, via modulating the general signaling molecules linked to the development of cellular inflammation.

Seven-week-old C57B/L6 mice (Dae Han Bio Link, Eumseong, Korea) were maintained under specific pathogen-free conditions at 22 °C and given access to food and water ad libitum. To examine the effects of adiponectin on early obesity stage-induced hypothalamic inflammation, mice were adapted for a week, randomly divided into two groups and fed either a standard diet (STD, 10% calories from fat, Research Diet Inc., New Brunswick, NJ, USA) or a high-fat diet (HFD, 60% of calories from fat, Research Diets Inc.) for four weeks. The components of the HFD and STD are indicated in Table 1. For adiponectin treatment, mice were given intraperitoneal (i.p) injections of globular adiponectin (3 mg/kg, Lugen Sci, Bucheon, Korea) for five days. Brains and serum were collected 3 h after last injection. In addition, body weight and epididymal fat weight were measured when tissue was harvested. The experimental procedure is described in a flowchart (Figure 5). All the animal care and experimental procedures were performed in accordance with the protocols approved by the Institutional Animal Care and Use Committee (IACUC) at the Incheon National University (permission number: INU-2016-001).

Following decapitation of five-day-old C57BL/6 mice, the diencephalon was removed under sterile conditions and triturated in Dulbecco’s modified Eagle′s medium (DMEM) F-12 containing 1% penicillin-streptomycin. The cell suspension was filtered through a 100-μm sterile cell strainer to remove debris and fibrous layers. The suspension was centrifuged, and the pellet resuspended in DMEM F-12, containing 10% fetal bovine serum (FBS) and 1% penicillin-streptomycin. The cells were then grown in this culture medium in 75-cm3 culture flasks at 37 °C and 5% CO2. When the cells reached confluence (at approximately nine days), microglia were separated from adhered astrocytes by shaking the culture at approximately 250 rpm for 2 h. The cells were then seeded onto 12-well tissue culture plates, previously coated with poly-d-lysine hydrobromide (50 μg/mL), after which they were distributed at 7.5 × 104 cells/well and incubated at 37 °C with 5% CO2. For the astrocyte primary culture, the adhered cells were harvested using 0.05% trypsin-ethylenediamine tetraacetic acid, resuspended in DMEM F-12 containing 10% FBS and 1% penicillin-streptomycin, and centrifuged for 5 min at 1000 rpm. The cells were then seeded at a concentration of 5 × 105 cells/mL in culture plates previously treated with poly-l-lysine hydrobromide (50 μg/mL), and grown for 24 h.

Supernatant from cultured BV-2 cells were collected 1 h after adiponectin (100 ng/mL or 1000 ng/mL) treatment followed by administration of palmitic acid (200 μM) for 24 h. The concentration of released cytokines was measured using mouse IL-1β and IL-6 DuoSet (R&D Systems, Minneapolis, MN, USA) according to the manufacturer′s instructions.

BV-2 cells were seeded at a density of 1 × 106 cells/well in 6-well plate and pre-treated with adiponectin (100 ng/mL or 1000 ng/mL) for 1 h followed by palmitic acid treatment for 30 min or 4 h. The cells were rinsed with phosphate buffered saline (PBS), followed by scraping and resuspension of the cell pellet in RIPA lysis buffer containing protease inhibitors, and centrifuged to remove debris, unbroken cells and cellular nuclei. The samples containing 20 μg of total protein were subjected to immunoblot analysis using polyclonal antibodies including anti-phospho-ERK, anti-ERK (Cell Signaling, Danvers, MA, USA), anti-IκBα (Santa Cruz Biotechnology, Santa Cruz, CA, USA), and anti-β-actin (Sigma-Aldrich, St. Louis, MO, USA). Quantification of band intensity was conducted using Image J software. The band intensities were normalized by dividing their values by the value for the total ERK protein, or β-actin protein, for the same sample on the same blot.

Statistical analyses were performed by Prism 6.0 software (GraphPad Software, San Diego, CA, USA). All the data are expressed as mean ± SEM. An unpaired t test was performed to analyze the significance between the two experimental groups. Two-way ANOVA analysis was performed to detect the interaction between two treatments. Significance was taken at p < 0.05.

This work was supported by a grant of the Korea Health Technology R&D Project through the Korea Health Industry Development Institute (KHIDI), funded by the Ministry of Health & Welfare, Republic of Korea (grant number: HI17C1600) and supported by an Incheon National University (International Cooperative) Research Grant for Jae Geun Kim. 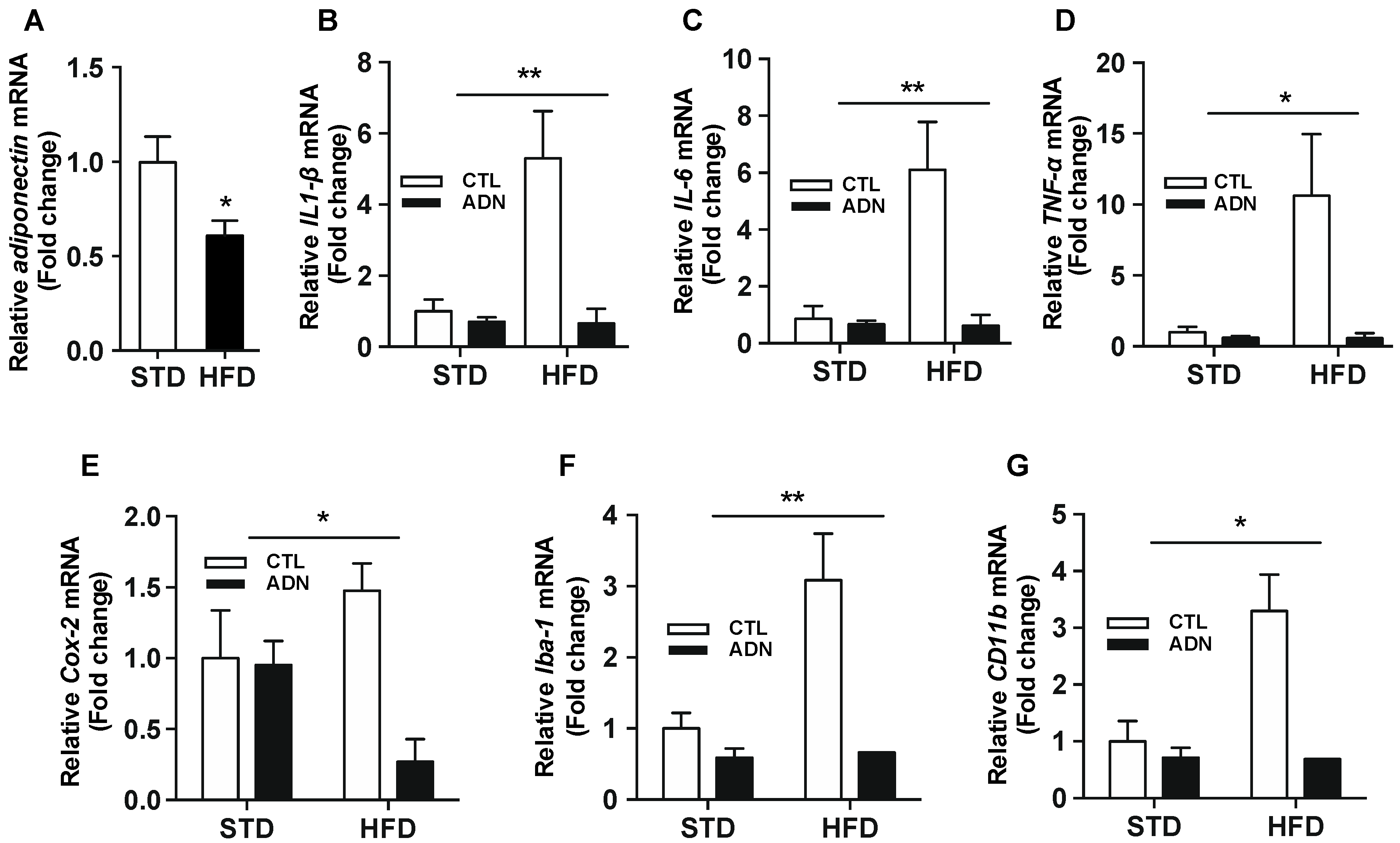 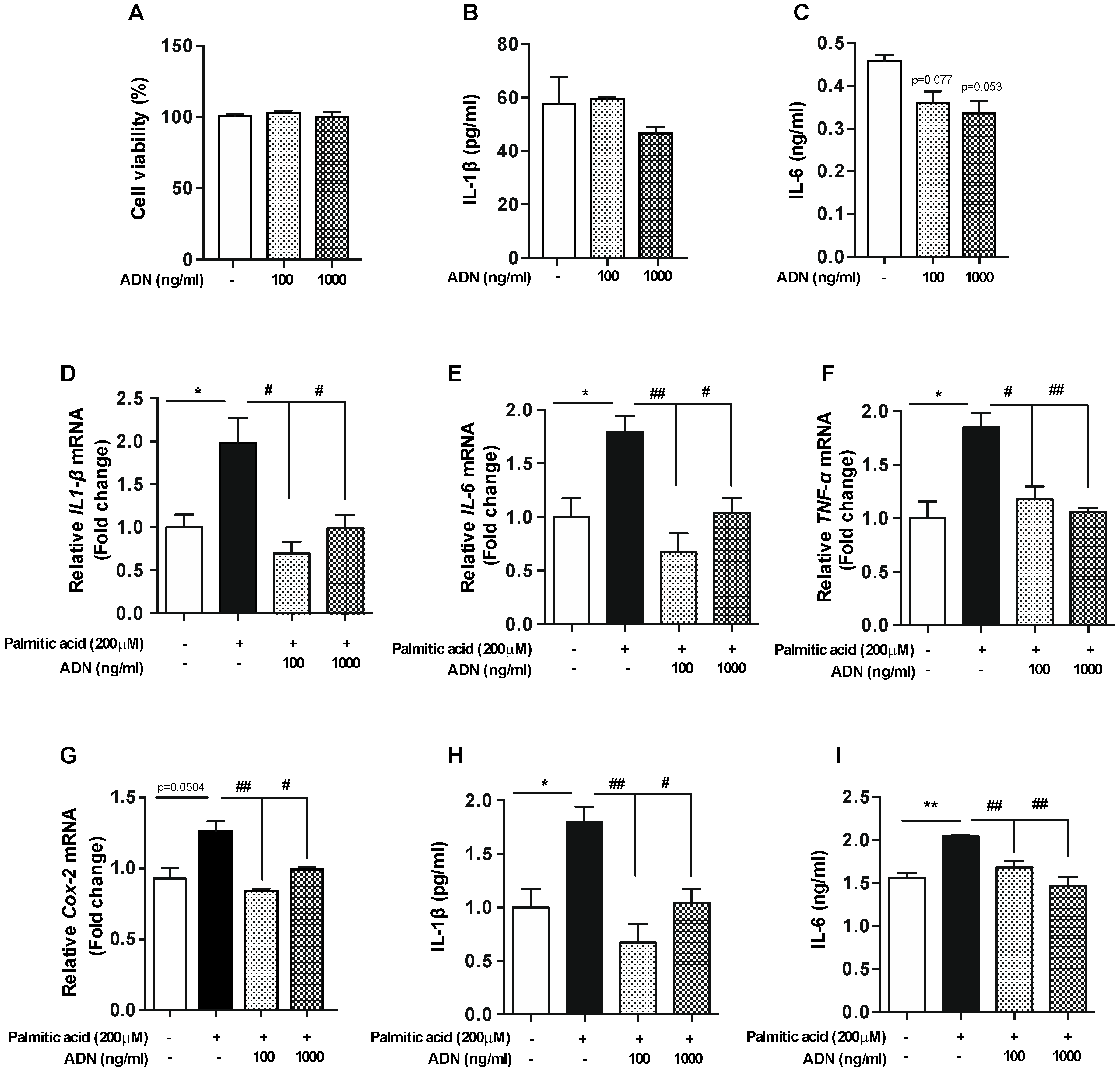 Table 1. Components of the HFD and STD.
Table 1. Components of the HFD and STD.
© 2019 by the authors. Licensee MDPI, Basel, Switzerland. This article is an open access article distributed under the terms and conditions of the Creative Commons Attribution (CC BY) license (http://creativecommons.org/licenses/by/4.0/).
We use cookies on our website to ensure you get the best experience. Read more about our cookies here.
Accept
We have just recently launched a new version of our website. Help us to further improve by taking part in this short 5 minute survey here. here.
Never show this again