Conjunctival Melanoma: Genetic and Epigenetic Insights of a Distinct Type of Melanoma

Several major pathological conditions, such as cardiovascular diseases and cancer display minerals or organic compound depositions [1]. Tissue calcifications are defined as the deposition of calcium salts, together with smaller amounts of iron, magnesium, and other mineral salts [1].
In breast tissues, microcalcifications play a crucial role in early cancer diagnosis [2]. Indeed, approximately 50% of non-palpable breast cancers are detected by mammography exclusively through microcalcification patterns [3], revealing up to 90% of ductal carcinoma in situ [4]. They can be classified according to their appearance on a mammogram based on the Breast Imaging Reporting and Data system [5], or by their physical and chemical properties [6]. In a recent paper, we demonstrated, for the first time, the presence of magnesium-substituted hydroxyapatite (Mg-HAp), which was frequently noted in breast cancer but never found in benign lesions [7]. In our experience, calcium oxalate (CO) calcification is often associated with benign lesions, whereas hydroxyapatite (HA) is related both to benign and malignant lesions [7]. Recent evidence suggests that the morphological appearance of mammographic microcalcifications is associated with patient prognosis. In fact, patients harboring small breast tumors with casting type calcifications in the mammograms have a poor survival rate for this tumor size category [8,9].
Despite the extensive investigation of breast microcalcifications, the mechanisms leading to their formation are still not defined. Recently, we suggested that ectopic mineralization in pathological conditions might be triggered by the epithelial to mesenchymal transition (EMT) phenomenon and regulated by mechanisms similar to those occurring under physiological conditions [8,10]. Ours and other studies [8,10,11,12,13] allows postulating an overlap between breast microcalcification production and bone mineralization. In particular, Maria Morgan’s group [10,11,12,13] investigated the molecular mechanisms of the microcalcification process in breast cell cultures demonstrating that the mineralization process, related to alkaline phosphatase activity, could be similar to that observed in osteoblast cells. Altogether, these pieces of evidence suggest an active role of microcalcifications in breast cancer occurrence and progression. Thus, this study aims to investigate: (a) the putative association between the presence of microcalcifications in breast lesions and the expression of both EMT and bone biomarkers, (b) the possible role of microcalcifications made of CO in the Breast Osteoblast-Like Cells (BOLCs) formation by macrophage-related EMT, and (c) the putative association between elemental composition of microcalcifications and breast cancer progression.

2.2. Assessment of the Mesenchymal Phenotype in Breast Lesions

2.4. Osteoblastic Differentiation and Mineralization in Breast Lesions: A Home for BOLCs

Transmission electron microscopy investigation was performed on both benign/normal (Figure 5A–C) and malignant breast tissue (Figure 5I). Among malignant lesions, we studied the ultrastructural aspect of cells located near microcalcifications. Our analysis confirmed the presence of cells with morphological characteristics typical of osteoblasts (Figure 5D). Their cytoplasm was rich in vesicles containing electron-dense granules similar to the intracellular vesicles of the osteoblasts (Figure 5E,F). Noteworthy, the elemental analysis of the electron-dense bodies inside these vesicles demonstrated the presence of HA (Figure 5E,F). In addition, breast cancer cells close to calcifications were embedded in a matrix rich in collagen (Figure 5G–I).

2.6. In Vitro Model of BOLCs Development

Human ex vivo analysis allowed us to develop an in vitro assay to demonstrate the relationship between microcalcification, BOLCs development, and breast cancer occurrence.

Morphological analysis of MDA-MB-231 alone (MDA-MB-231/CTRL) showed that breast cells with mesenchymal characteristics (morphology and vimentin expression) were less than 5%, and no calcifications were present (Figure 6A). Conversely, our experiments demonstrated that a high percent of MDA-MB-231-MΦ/CO underwent mesenchymal transformation and osteoblast differentiation. In particular, at the end of experiments, we observed more than 50% of vimentin-positive spindle-shaped breast cells (Figure 6B). Mesenchymal transformation and osteoblast differentiation of breast cancer cells were also observed in the co-cultures of MDA-MB-231/CO. Nevertheless, in these conditions, we observed to be less than 5% of vimentin-positive breast cells. Noteworthy, we also identified numerous cells with osteoblast characteristics associated with calcification (Figure 6C,D). More important, in the presence of CO (Figure 6C), breast cancer cells increase their proliferation rate, also producing large calcium nodules (Figure 6D).

Among the totality of the samples collected, in this retrospective study, we further studied 15 benign lesions with microcalcification (foll_BL+) and 15 benign lesions without microcalcifications (foll_BL−) from patients that developed a malignant condition in the same breast quadrant within five years from the first diagnosis (lesions with follow-up, foll_BL). Samples were classified as follows: 15 foll_BL+ consisting of five fibrocystic mastopathies and 10 fibroadenomas, and 15 foll_BL− consisting of six fibrocystic mastopathies and nine fibroadenomas. Concerning the respective malignant lesions, the lesions were classified as showed in Table 1.

2.6.6. The Link among Microcalcifications, Macrophages, and the EMT Phenomenon

After fixation in 10% buffered formalin for 24 h, breast tissues were embedded in paraffin. Three-micrometer thick sections were stained with hematoxylin and eosin (H&E), and the diagnostic classification was blindly performed by two pathologists [36].

4.3. Immunohistochemistry of the Paraffin Sections

Small pieces of breast tissue (1 mm3) from surgical specimens were fixed in 4% paraformaldehyde (PFA) and post-fixed in 2% osmium tetroxide [37]. After washing with 0.1 M phosphate buffer, the sample was dehydrated by a series of incubations in 30%, 50%, and 70%, ethanol. Dehydration was continued by incubation steps in 95% ethanol, absolute ethanol, and propylene oxide; then, samples were embedded in Epon (Agar Scientific, Stansted Essex CM24 8GF UK) [37]. Eighty µm ultra-thin sections were mounted on copper grids and observed with Hitachi 7100FA transmission electron microscope (Hitachi, Schaumburg, IL, USA).

4.9. In Vitro Model for the Development of “Osteoblast-Like Cells”

Cells were plated on poly-l-lysine coated slides (Sigma-Aldrich, cat #P4707) in 24-well cell culture plates and fixed in 4% paraformaldehyde. After pre-treatment with EDTA citrate at 95 °C for 20 min and 0.1% Triton X-100 for 15 min, cells were incubated 1 h with the rabbit-monoclonal anti-vimentin antibody (see Table 2). Washings were performed with PBS/Tween20 pH 7.6. Reactions were revealed by HRP-DAB Detection Kit (UCS Diagnostic, Rome, Italy) and Mayer’s Hematoxylin to stain the nucleus.

Cells were fixed in 4% paraformaldehyde, post-fixed in 2% osmium tetroxide and embedded in Epon resin for morphological studies. After washing with 0.1 M phosphate buffer, the sample was dehydrated by a series of incubations in 30%, 50%, and 70%, ethanol. Dehydration was continued by incubation steps in 95% ethanol, absolute ethanol, and hydroxypropyl methacrylate, then samples were embedded in Epon (Agar Scientific, Stansted Essex, UK).

The identification of the molecular mechanisms into breast carcinogenesis represents one of the most challenging topics of translational research. In this scenario, the study of the formation of microcalcifications could be considered a key element for understanding both the biology and clinical aspects of a relevant number of breast cancers. Indeed, according to our model, the presence of microcalcifications, also in benign lesions, can assume a prognostic and predictive value as a sign of EMT occurrence and BOLCs formation. In this context, it is important to remember that the presence of BOLCs in primary breast cancer has been associated with an increased risk of developing bone metastatic lesions [1,8,10,17,40,41]. Therefore, our study can contribute to the re-evaluation of the role of microcalcifications in the management of breast cancer patients laying the foundation for the development of clinical analysis capable of identifying the risk of breast cancer occurrence and progression based on the in vivo detection of microcalcifications. 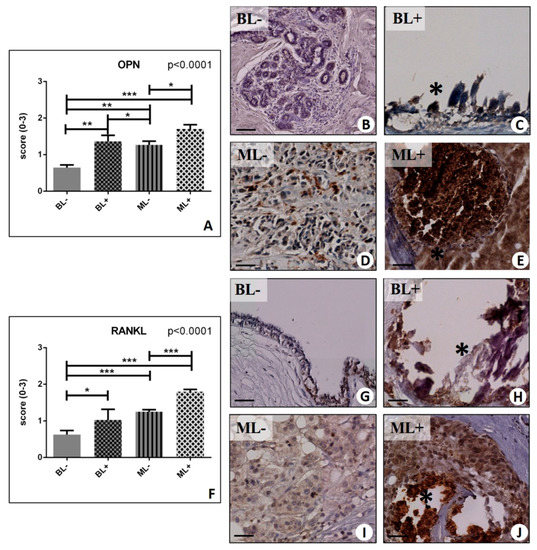 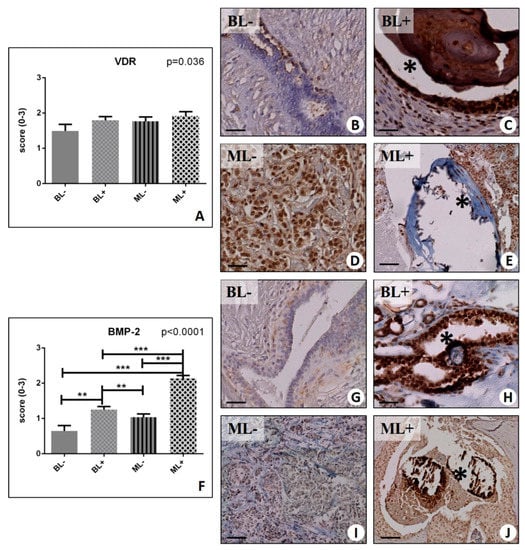 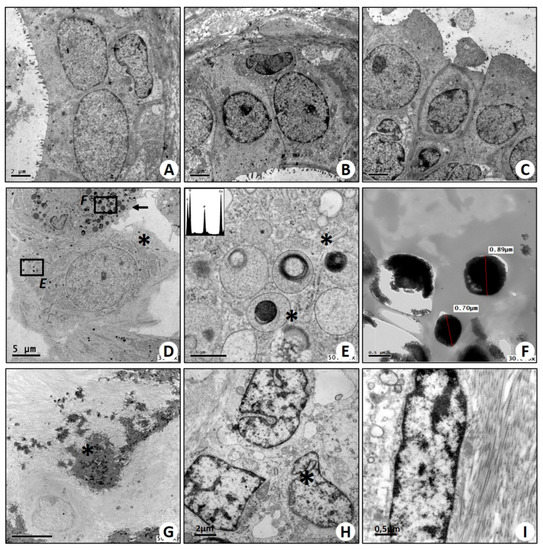 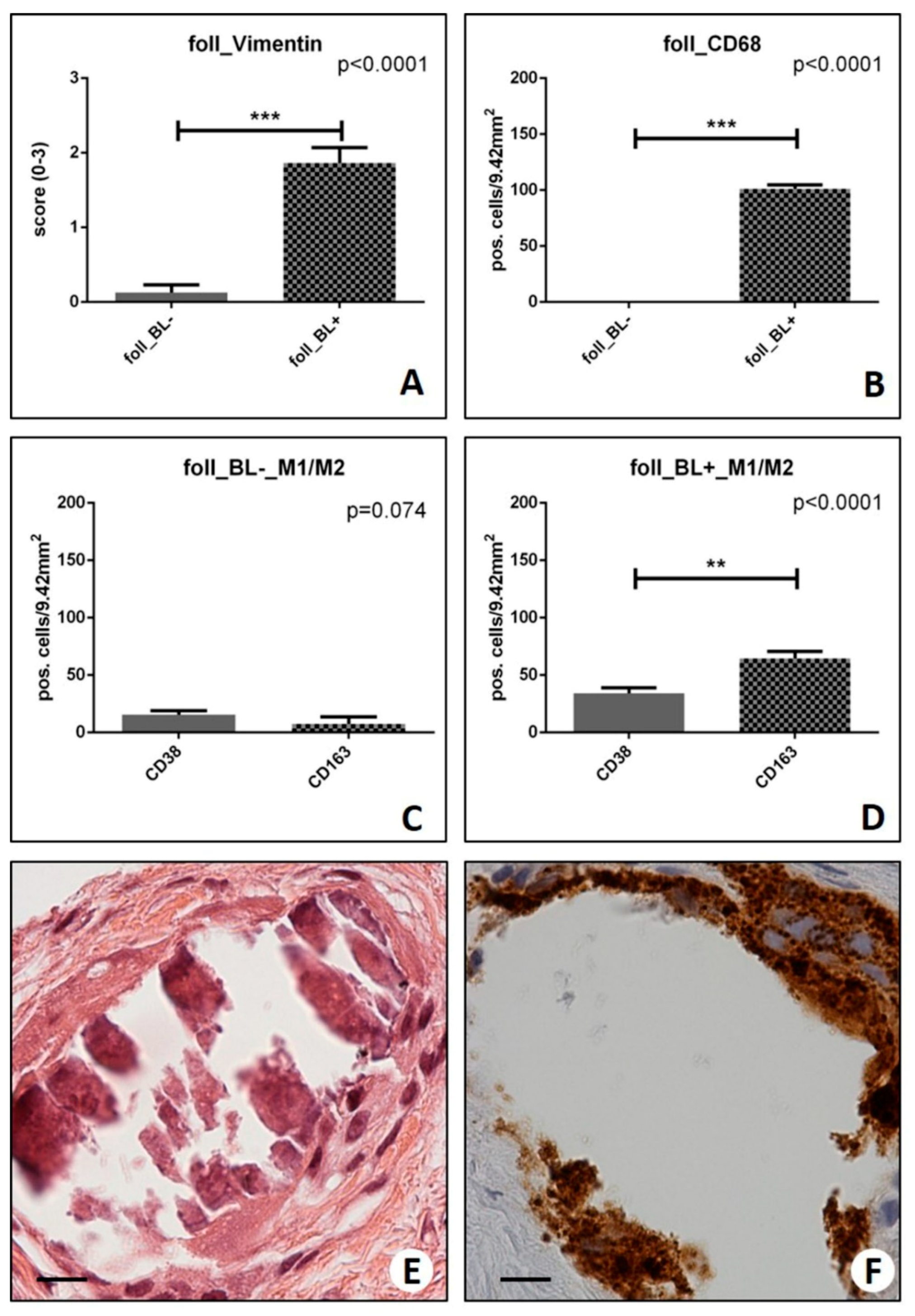 Table 2. List of primary antibodies.
Table 2. List of primary antibodies.
© 2019 by the authors. Licensee MDPI, Basel, Switzerland. This article is an open access article distributed under the terms and conditions of the Creative Commons Attribution (CC BY) license (http://creativecommons.org/licenses/by/4.0/).
We use cookies on our website to ensure you get the best experience. Read more about our cookies here.
Accept
We have just recently launched a new version of our website. Help us to further improve by taking part in this short 5 minute survey here. here.
Never show this again