Evolutionary Plasticity in Detoxification Gene Modules: The Preservation and Loss of the Pregnane X Receptor in Chondrichthyes Lineages

Bisphenol A (BPA), a known endocrine disrupting chemical (EDC), was administered by diet to gilthead sea bream (Sparus aurata) in order to study its effects on the endocannabinoid system (ECS) and gonadal steroidogenesis. 2-year-old male gilthead sea bream were fed with two different concentrations of BPA (LOW at 4 and HIGH at 4000 µg/kg body weight for 21 days during the reproductive season. Exposure to 4000 µg BPA/kg bw/day (BPA HIGH) reduced sperm motility and altered the straight-line velocity (VSL) and linearity (LIN). Effects on steroidogenesis were evident, with testosterone (T) being up-regulated by both treatments and 11-ketotestosterone (11-KT) down-regulated by BPA HIGH. Plasma levels of 17β-estradiol (E2) were not affected. The Gonadosomatic Index (GSI) increased in the BPA HIGH group. Interestingly, the levels of endocannabinoids and endocannabinoid-like compounds were significantly reduced after both treatments. Unpredictably, a few changes were noticed in the expression of genes coding for ECS enzymes, while the receptors were up-regulated depending on the BPA dose. Reproductive markers in testis (leptin receptor (lepr), estrogen receptors (era, erb), progesterone receptors (pr) and the gonadotropin releasing hormone receptor (gnrhr)) were up-regulated. BPA induced the up-regulation of the hepatic genes involved in oogenesis (vitellogenin (vtg) and zona pellucida 1 (zp1)). View Full-Text
Keywords: BPA; endocannabinoids; gonads; gilthead sea bream BPA; endocannabinoids; gonads; gilthead sea bream
►▼ Show Figures 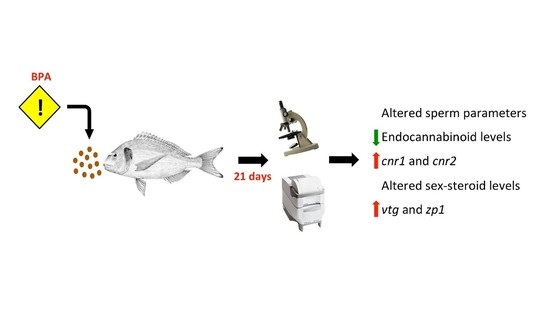