Association with PD-L1 Expression and Clinicopathological Features in 1000 Lung Cancers: A Large Single-Institution Study of Surgically Resected Lung Cancers with a High Prevalence of EGFR Mutation

The immune checkpoint inhibitors anti-programmed cell death 1 (PD-1)/programmed cell death ligand 1 (PD-L1) (anti–PD-1/PD-L1) are currently changing the approach of treatment to patients with non-small cell lung cancer (NSCLC). Over the last two years, the U.S. Food and Drug Administration (FDA) has granted approval to the anti–PD-1 inhibitors, nivolumab (OPDIVO) and pembrolizumab (KEYTRUDA) and the anti–PD-L1 inhibitor, atezolizumab (TECENTRIQ) for the treatment of patients with advanced NSCLC with progression during or after first-line therapy [1,2,3].
Identification of patients who might benefit from immune checkpoint inhibition in NSCLC is significant. PD-L1 expression is an important biomarker for the prediction of response to anti-PD1 and anti-PD-L1 immunotherapy. Therefore, the evaluation of PD-L1 expression in cancer is of critical concern and has been mainly based on the result of PD-L1 immunohistochemical staining. In the NCCN guideline, the FDA-approved 22C3 IHC assay for PD-L1 utilizes a cutoff of 50% tumor proportion score (TPS) for first-line therapy and 1% TPS for second-line therapy with pembrolizumab in NSCLC [1].
Recently, other biomarkers that aid prediction of response to immune checkpoint inhibitors such as tumor mutation burden (TMB) and microsatellite instability (MSI) have been emerging and PD-L1 expression alone is known to be an imperfect predictive biomarker. Despite the imperfect predictive value of PD-L1 expression alone, PD-L1 expression is the most widely used predictive marker in clinical practice to select patients most likely to respond the immunotherapy. Therefore, the identification and characterization of factors to predict patients with high expression of PD-L1 may still be significant. Various studies have reported the association between PD-L1 expression and driver genetic status in NSCLC, but the results have been conflicting and inconclusive [4,5,6,7,8,9,10,11,12,13,14]. A recent meta-analysis identified a high level of heterogeneity was observed between PD-L1 expression and driver genetic alterations [15]. Furthermore, immunotherapy is recommended as negative or unknown test results for EGFR mutations and ALK rearrangements in the NCCN guideline [1]. Therefore, there are limited and controversial data on PD-L1 expression in EGFR-mutated lung adenocarcinoma.
Therefore, we analyzed the association between PD-L1 expression and clinicopathological factors including driver genetic alterations to determine its predictive value. We also focused on PD-L1 expression in patients with EGFR mutated lung adenocarcinomas. We performed this analysis using a clinically validated PD-L1 IHC assay and clinically relevant cutoff values for PD-L1 positivity in a large single-institution study of surgically resected lung cancers with a high prevalence of EGFR mutation.

We also analyzed the association between PD-L1 expression and clinicopathological factors in 424 EGFR mutated lung adenocarcinomas. Similar to the results found in the 785 lung adenocarcinomas, current or ex-smokers, higher T, N stage, AJCC stage, and poorly differentiated histological variants exhibited significantly higher PD-L1 expression at the 1% and 50% cut-off value for PD-L1 positive (Table 4 and Table A4).

PD-L1 expression was assessed in formalin-fixed paraffin embedded tumor samples acquired by surgical resection sample from each patients, using the PD-L1 IHC 22C3 pharmDx assay (Dako North America, Carpinteria, CA, USA) according to manufacturer’s instructions [36]. For the 22C3 pharmDx assay, sections were stained with anti-PD-L1 22C3 mouse monoclonal primary antibody using the EnVision FLEX visualization system on a Dako Autostainer Link 48 system with negative reagent controls and cell line run controls, as described in the PD-L1 IHC 22C3 pharmDx package insert [37]. Deparaffinization, rehydration, and target retrieval was performed with a 3-in-1 procedure using PT Link. Following peroxidase blocking, specimens were incubated with monoclonal mouse primary antibody to PD-L1 or the negative control reagent. Specimens were then incubated with Mouse Linker, followed by incubation with a ready-to-use visualization reagent consisting of secondary antibody molecules and horseradish peroxidase molecules coupled to a dextran polymer backbone. The enzymatic conversion of the subsequently added chromogen results in the precipitation of a visible reaction product at the site of the antigen. The color of the chromogenic reaction is modified using a chromogen enhancement reagent; the specimen may then be counterstained and cover slipped. Results were interpreted using a light microscope [38]. All stained slides were evaluated by a board-certified pathologist for PD-L1 membrane staining. The percentage of membranous stained tumor cells in the overall area of the tumor (tumor proportion score) was scored regardless of intensity [2]. Positivity was evaluated by two different cut-off values, 1% and 50%, based on cutoffs used in pembrolizumab clinical trials [2,36].

The association between PD-L1 expression and clinicopathological features was analyzed with the χ2 test or Fisher’s exact test. The association between clinicopathological features or genetic alterations with PD-L1 positivity was also assessed by univariable and multivariable logistic regression models. A p-value of less than 0.05 was considered to indicate a statistically significant difference. All analyses were carried out using SPSS version 22 (SPSS Inc, Chicago, IL, USA).

In conclusion, PD-L1 expression using a 22C3 assay at clinically relevant cutoff could be predicted in higher N stage, histological solid pattern, wild-type EGFR, and ALK positive in lung adenocarcinoma. These results may be beneficial for selecting of high-risk patients for good response to the immunotherapy. 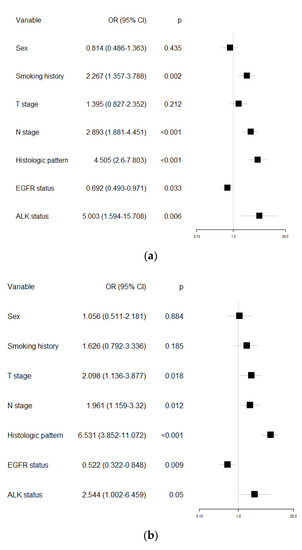