Tear Metabolomics in Dry Eye Disease: A Review
Next Article in Special Issue

Association with PD-L1 Expression and Clinicopathological Features in 1000 Lung Cancers: A Large Single-Institution Study of Surgically Resected Lung Cancers with a High Prevalence of EGFR Mutation
Previous Article in Journal

Many long non-coding RNAs (lncRNAs) have emerged as good biomarkers and potential therapeutic targets for various cancers. We aimed to get a detailed understanding of the lncRNA landscape that is associated with lung cancer survival. A comparative analysis between our RNA sequencing (RNA-seq) data and TCGA datasets was conducted to reveal lncRNAs with significant correlations with lung cancer survival and then the association of the most promising lncRNA was validated in a cohort of 243 lung cancer patients. Comparing RNA-seq data with TCGA ones, 84 dysregulated lncRNAs were identified in lung cancer tissues, among which 10 lncRNAs were significantly associated with lung cancer survival. LINC01537 was the most significant one (p = 2.95 × 10−6). Validation analysis confirmed the downregulation of LINC01537 in lung cancer. LINC01537 was observed to inhibit tumor growth and metastasis. It also increased cellular sensitivity to nilotinib. PDE2A (phosphodiesterase 2A) was further identified to be a target of LINC01537 and it was seen that LINC01537 promoted PDE2A expression via RNA–RNA interaction to stabilize PDE2A mRNA and thus echoed effects of PDE2A on energy metabolism including both Warburg effect and mitochondrial respiration. Other regulators of tumor energy metabolism were also affected by LINC01537. These results elucidate a suppressed role of LINC01537 in lung cancer development involving tumor metabolic reprogramming, and we believe that it might be a biomarker for cancer survival prediction and therapy. View Full-Text
Keywords: LINC01537; PDE2A; survival; energy metabolism; lung cancer LINC01537; PDE2A; survival; energy metabolism; lung cancer
►▼ Show Figures 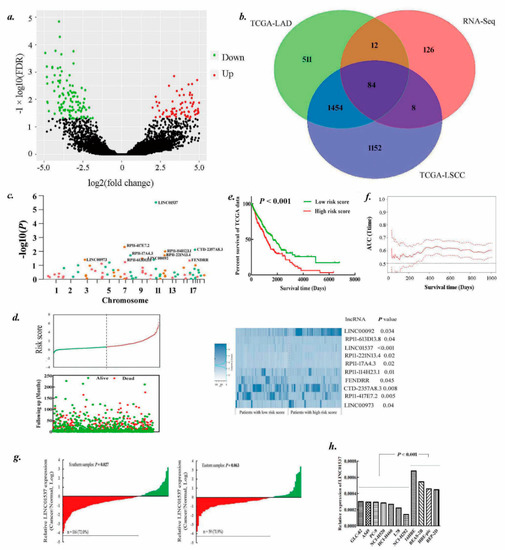