Being a staple food, wheat (Triticum aestivum) nutritionally fulfills all requirements of human health and also serves as a significant link in the food chain for the ingestion of pollutants by humans and animals. Therefore, the presence of the heavy metals such as lead (Pb) and cadmium (Cd) in soil is not only responsible for the reduction of wheat crop yield but also the potential threat for human and animal health. However, the link between DNA methylation and heavy metal stress tolerance in wheat has not been investigated yet. In this study, eight high yielding wheat varieties were screened based on their phenotype in response to Pb stress. Out of these, Pirsabak 2004 and Fakhar-e-sarhad were identified as Pb resistant and sensitive varieties, respectively. In addition, Pirsabak 2004 and Fakhar-e-sarhad varieties were also found resistant and sensitive to Cd and Zinc (Zn) stress, respectively. Antioxidant activity was decreased in Fakhar-e-sarhad compared with control in response to Pb/Cd/Zn stresses, but Fakhar-e-sarhad and Pirsabak 2004 accumulated similar levels of Pb, Cd and Zn in their roots. The expression of Heavy Metal ATPase 2 (TaHMA2) and ATP-Binding Cassette (TaABCC2/3/4) metal detoxification transporters are significantly upregulated in Pirsabak 2004 compared with Fakhar-e-sarhad and non-treated controls in response to Pb, Cd and Zn metal stresses. Consistent with upregulation of metal detoxification transporters, CG DNA hypomethylation was also found at the promoter region of these transporters in Pirsabak 2004 compared with Fakhar-e-sarhad and non-treated control, which indicates that DNA methylation regulates the expression of metal detoxification transporters to confer resistance against metal toxicity in wheat. This study recommends the farmers to cultivate Pirsabak 2004 variety in metal contaminated soils and also highlights that DNA methylation is associated with metal stress tolerance in wheat. View Full-Text
Keywords: DNA methylation; ABCC transporters; HMA2; wheat; metal stress tolerance DNA methylation; ABCC transporters; HMA2; wheat; metal stress tolerance
►▼ Show Figures 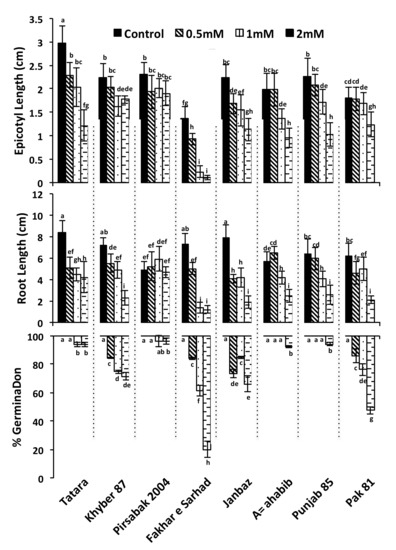