MicroRNA-15a Regulates the Differentiation of Intramuscular Preadipocytes by Targeting ACAA1, ACOX1 and SCP2 in Chickens
Previous Article in Special Issue

Chagas disease (CD) affects approximately 6–7 million people worldwide, from which 30% develop chronic Chagas cardiomyopathy (CCC), usually after being asymptomatic for years. Currently available diagnostic methods are capable of adequately identifying infected patients, but do not provide information regarding the individual risk of developing the most severe form of the disease. The identification of biomarkers that predict the progression from asymptomatic or indeterminate form to CCC, may guide early implementation of pharmacological therapy. Here, six circulating microRNAs (miR-19a-3p, miR-21-5p, miR-29b-3p, miR-30a-5p, miR-199b-5p and miR-208a-3p) were evaluated and compared among patients with CCC (n = 28), CD indeterminate form (n = 10) and healthy controls (n = 10). MiR-19a-3p, miR-21-5p, and miR-29b-3p were differentially expressed in CCC patients when compared to indeterminate form, showing a positive correlation with cardiac dysfunction, functional class, and fibrosis, and a negative correlation with ejection fraction and left ventricular strain. Cardiac tissue analysis confirmed increased expression of microRNAs in CCC patients. In vitro studies using human cells indicated the involvement of these microRNAs in the processes of cardiac hypertrophy and fibrosis. Our study suggests that miRNAs are involved in the process of cardiac fibrosis and remodeling presented in CD and indicate a group of miRNAs as potential biomarkers of disease progression in CCC.
Keywords: chagas disease; cardiomyopathy; microRNA; fibrosis; inflammation chagas disease; cardiomyopathy; microRNA; fibrosis; inflammation

Chagas disease, caused by the protozoan parasite Trypanosoma cruzi, affects approximately 6–7 million people worldwide mainly in Latin American countries, and is spreading to other continents due to population migration [1]. The majority of infected patients will remain asymptomatic during the chronic phase, in what is known as the indeterminate form of Chagas disease, while approximately 30% will develop the cardiac form, also known as chronic Chagas disease Cardiomyopathy (CCC), with a high rate of morbidity and mortality [2]. Residual parasitism is found in different organs in chronic Chagas disease, despite the clinical presentation [3]. In the cardiac form, however, myocardial dysfunction occurs due to parasite persistence, chronic inflammation [4,5], and cardiac fibrosis [6]. Additionally, cardiac remodeling can lead to heart chamber dilation, wall thinning, arrhythmia, and cardiac hypertrophy [4,7,8,9].
Although currently available diagnostic tests are capable of adequately identifying infected patients, there is no biomarker that can predict the individual risk for a patient’s potential to progress from the indeterminate form to CCC [8]. Therefore, the identification of novel biomarkers allowing for early identification of myocardial damage is desirable for interventions aiming at delaying heart dysfunction development and progression.
MicroRNAs are a class of non-coding RNAs with approximately 22 nucleotides that are widely distributed and frequently conserved among species, and act through regulating gene expression at the post-transcriptional level [10,11,12,13]. Functional microRNAs can be detected in whole blood, serum, and plasma, with potential application as diagnostic or prognostic biomarkers [11,12,13,14]. Altered expression levels of circulating microRNAs in different body fluids have been reported in several disease settings [13,14,15], including cardiovascular diseases [16,17]. In this context, studies demonstrated that miR-19a contributes to heart failure [18] whereas miR-21 [19], miR-29 [20,21], and the miR-30 family [22] contribute to cardiac fibrosis or hypertrophy, while miR-199b acts as a regulator of left ventricular remodeling, associated with cardiac hypertrophy [23].
In Chagas disease, the expression levels of miR-208a and miR-208b were altered in the heart from CCC subjects [24]. Additionally, the potential of miR-208a as a biomarker for Chagas disease has been explored [25]. In the present study, we evaluated the expression profile of circulating microRNAs in three groups: subjects with CCC, subjects with indeterminate form of Chagas disease, and healthy controls, in order to identify possible correlations with clinical parameters associated with the disease prognosis. Additionally, we compared the expression of selected microRNAs in CCC hearts, and explored their roles in vitro using human cardiac fibroblasts and cardiomyocytes.

Since the detection of circulating miRNAs can vary within each type of analyzed sample [26], we compared the levels of the selected miRNAs in serum and plasma samples obtained from 16 chronic Chagas subjects. Increased expression levels of miR-19a-3p, miR-29b-3p, and miR-30a-5p were observed in serum samples when compared to plasma from the same subjects (Figure S1A,C,D). No differences were observed between miR-21-5p or miR-199b-5p when comparing serum and plasma samples (Figure S1B,E). Amplification of miR-208a-3p was successful in only four samples, with higher levels detected in plasma samples (Figure S1F).
The following validation analysis was performed in serum samples from 42 subjects, stratified into three groups (healthy, indeterminate form, and CCC). Patients with Chagas disease underwent evaluations by echography and MRI. Clinical and demographic characteristics of the Chagas disease patients are shown in Table 1.
Upregulation of miR-19a-3p, miR-21-5p, and miR-29b-3p were observed in subjects with CCC when compared to Chagas disease indeterminate form (Figure 1). For all miRNAs tested, similar levels were found between healthy controls and indeterminate form subjects. Expression levels of miR-30a-5p and miR-199b-5p were similar between the tested groups (Figure 1A–E). MiR-208a-3p was not detected in the majority of the samples evaluated.
A receiver operating characteristic (ROC) analysis was performed to evaluate sensitivity, specificity, and accuracy of the miR-19a-3p, miR-21-5p, miR-29b-3p, and miR-199b-5p as cardiac dysfunction biomarkers in Chagas disease patients (Figure 2). By comparing indeterminate and CCC groups, it was demonstrated that the area under the curve (AUC) for miR-19a-3p was 0.77 (67% sensitivity and 80% specificity), miR-21-5p was 0.54 (57% sensitivity and 60% specificity), miR-29b-3p was 0.70 (60% sensitivity and 70% specificity), and miR-199b-5p was 0.57 (67% sensitivity and 57% specificity).
Next, we evaluated the correlation between clinical parameters of Chagas disease (indeterminate vs CCC) and the expression levels of the selected miRNAs. MiR-19a-3p and miR-21-5p expression levels showed a positive correlation with cardiac dysfunction, functional class (NYHA II/IV), and percentage of fibrosis measured by cardiac MRI. Negative correlations were found between the levels of miR-19a-3p and miR-21-5p ejection fraction and left ventricular strain, measured by echocardiography. Furthermore, miR-29b-3p was negatively correlated with ejection fraction and positively correlated with cardiac dysfunction, functional class, and percentage of fibrosis (Table 2).

2.2. MicroRNAs in Cardiac Tissue Samples of Subjects with End-Stage CCC

Left ventricular sections obtained from explanted hearts were evaluated after staining with hematoxylin and eosin, showing the presence of inflammatory infiltrates composed of mononuclear cells, areas of cardiac fibrosis and hypertrophic myocytes (Figure 3A–D). In order to evaluate whether the microRNA expression in the cardiac tissues is consistent with the findings detected in the serum, explanted cardiac tissues from chronic Chagas disease subjects (n = 9) and unaffected controls (n = 8) were evaluated by RT-qPCR. Increased expression levels of all microRNAs tested (miR-19a-3p, miR-21-5p, miR-29b-3p, miR-30a-5p, miR-199b-5p and miR-208a-3p) were found in the heart samples from subjects with Chagas disease when compared to controls (Figure 3E).

To evaluate the possible involvement of miRNAs in the cardiac fibrosis process that occurs in Chagas disease, we used an in vitro model of human cardiac fibroblasts stimulated with the profibrogenic factor TGF-β1. This cytokine found in highly elevated levels in CCC [27] and induces collagen production (Figure 4A). First, markers of fibroblasts, such as DDR2, αSMA, and vimentin, were detected in cells obtained from heart explants (Figure 4B–D). TGF-β1 stimulation was associated with a significant increase in COL1A1 expression, as shown by high-content imaging and RT-qPCR analyses (Figure 4E–G). Overexpression of miR-21-5p was found in TGF-β1-stimulated cardiac fibroblasts, compared to unstimulated cells (Figure 4H). Other miRNAs tested (miR-19a-3p, miR-29b-3p, miR-30a-5p, miR-199b-5p and miR-208a-3p) were not altered by the addition of TGF- β1 in cardiac fibroblast cultures.

2.4. Expression of MicroRNAs in a Hypertrophy Model Using hiPSC-Derived Cardiomyocytes

Next, to investigate a possible role of the selected miRNAs in cardiomyocyte hypertrophy, a feature of CCC [28], we used an in vitro model based on human induced pluripotent stem cells-derived cardiomyocytes (hiPSC-CMs), stimulated with 10 nM ET-1 (Figure 5A). HiPSC-CMs presented spontaneous contractility and cardiac troponin T expression (Figure 5B–D). In addition, hiPSC-CMs were positively stained for the cardiomyocyte markers alpha-actinin, cardiac troponin T, GATA-4, and MF-20 (Figure 5E–G). Cardiomyocyte hypertrophy induction by ET-1 stimulation was confirmed by increased NPPB expression and NT-pro-BNP levels (Figure 5H–I). Moreover, ET-1-stimulated cardiomyocytes presented a significant increase in cell size, confirming a hypertrophic phenotype (Figure 5J).
After validating the in vitro hypertrophy model, we evaluated the selected miRNAs. A significant increase in the expression of miR-19a-3p, miR-21-5p, miR-29b-3p and miR-199b-5p (p < 0.05) was observed in cardiomyocytes stimulated with ET-1 compared to untreated controls (Figure 6A–D).

This is an exploratory study consisting of the analysis of circulating microRNAs followed by heart tissue analysis and functional in vitro assays. The procedures complied with the Declaration of Helsinki and received prior approval by the Ethics Committee of the São Rafael Hospital (Protocol # 20023913.6.0000.0048, 07/30/2013), and has been registered at ClinicalTrials.gov under the identifier, NCT01842880. All subjects signed the written informed consent before inclusion in the study. Heart samples were obtained from the Heart Transplant Service at Messejana Hospital, Fortaleza, Brazil, with approval by the São Rafael Hospital’s Ethics committee (Protocol # 51025115.3.0000.0048).

The authors acknowledge Daniela Paixão for administrative support, Agnaluce Moreira for the NT-Pro-BNP analysis and Bruno Diaz Paredes for technical support in the flow cytometry analysis. This study was supported by funds from the Bahia State Foundation for Research (FAPESB) and Institutos Nacionais de Ciência e Tecnologia (INCT; 465656/2014-5). Milena B. P. Soares is a recipient of CNPq fellowship. 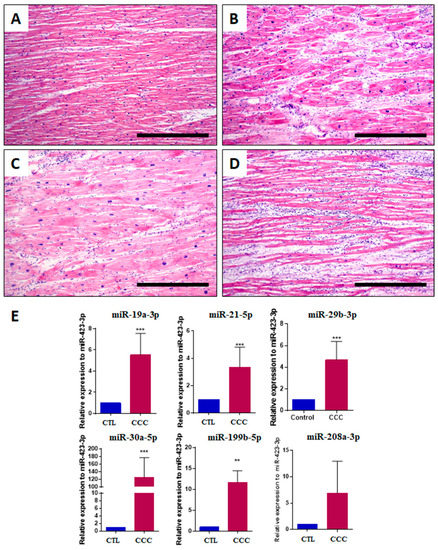 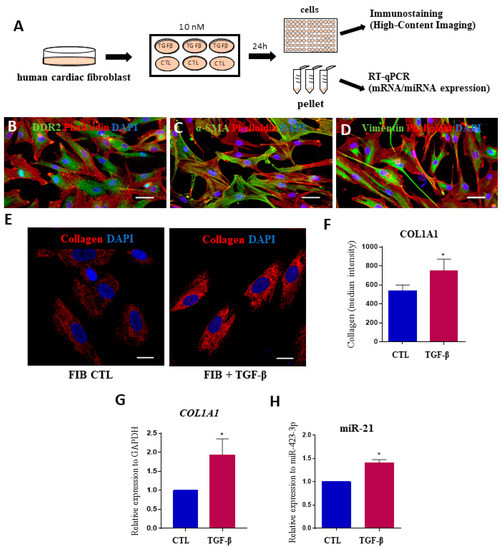 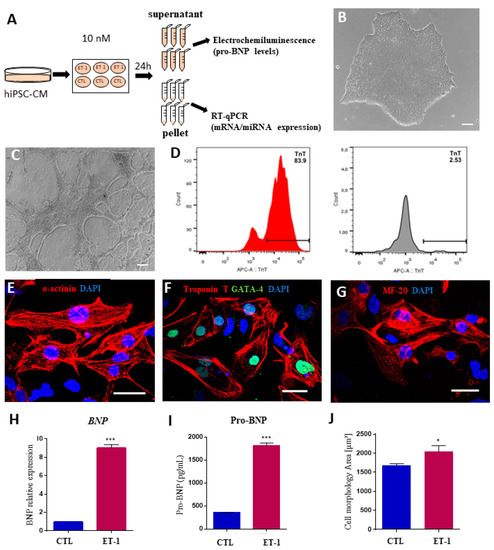 Table 3. Circulating microRNA expression levels in cardiovascular disease.
Table 3. Circulating microRNA expression levels in cardiovascular disease.
© 2019 by the authors. Licensee MDPI, Basel, Switzerland. This article is an open access article distributed under the terms and conditions of the Creative Commons Attribution (CC BY) license (http://creativecommons.org/licenses/by/4.0/).
We use cookies on our website to ensure you get the best experience. Read more about our cookies here.
Accept
We have just recently launched a new version of our website. Help us to further improve by taking part in this short 5 minute survey here. here.
Never show this again