Electroporation is a widely used technique that increases the permeability of the cellular membrane by exposing the cells to electric fields of appropriate intensity and duration [1,2]. This technique has been positively accepted by scientific and medical communities due to its safety and effectiveness for transferring nucleic acids, drugs, etc., for pharmacological studies and clinical applications (in particular, oncological applications) [3,4].
Electroporation-induced changes in cell permeability can be classified as reversible and irreversible electroporation, according to the membrane resealing of affected cells [5]. In the case of reversible electroporation, the cell membrane reseals after transient permeabilization [6]. Reversible electroporation can be used in clinics to facilitate the entry of chemotherapeutic agents such as bleomycin for the local treatment of tumors (this process is known as electrochemotherapy (ECT)) [7]. ECT is one of the prominent treatments in oncology and is used in several oncology centers throughout Europe for the palliative treatment of skin and subcutaneous metastases of many cancer types [8,9,10]. ECT effectiveness in antitumor treatment depends on many factors, including the tumor type [11,12] and the anticancer drug used [13]. As one of the most commonly used electro chemotherapeutic drugs, bleomycin acts as a cleaving agent for cellular DNA molecules [14], and its action also results in the induction of endoplasmic stress. Consequently, this may lead to the immunogenic cell death and the activation of the anti-cancer immune response [15].
It is known that immune response activation helps in the complete eradication of tumor cells [16]. However, conventional ECT does not induce enough stimulation of the immune system to prevent the formation of new tumors or the growth of distant tumors. In order to boost the immune response of electrochemotherapy, a stimulating agent is needed [17,18]. For this reason, it has been proposed to use gene electrotransfer in combination with ECT for the enhancement of the systemic antitumor effect [19,20]. It is already been proven that combining ECT with immunostimulating agents increases the response rate of distant tumors in deep-seated regions—not only the tumors treated by ECT [3]. Though there are many scientific publications claiming the effective treatment of cancer by inducing the anti-tumor immune response [4,21,22,23], there are still many challenges to overcome in order to achieve safe and efficient tumor immunotherapy. While the efficiency of cancer immunotherapies still leaves something to be desired [24,25], the main barrier to the application of immunotherapy is the possibility of immune-related adverse effects (for reviews see [26,27]). Some authors claim that cancer immunotherapy employing the delivery of the cytokine-coding vector has less side effects than the direct delivery of the same cytokine [28,29]. However, it should be noted that its transfection efficiency and its related treatment efficiency is still low, and current trials aim to improve it [30]. Therefore, with the increasing efficiency of transfection, concerns about the over-expression of therapeutic cytokines after immunogenetherapy and associated adverse reactions remain [31]. This shows the need to develop techniques that allow for the precise control of gene expression after the delivery of genes coding immune system stimulating molecules.
There are already some techniques that allow for the suppression of protein production, e.g., RNA interference using small interfering RNAs (siRNAs) [32,33] or micro RNA (miRNA) mimics [34,35]. However, these techniques also suffer from a plethora of issues, including limited transfection efficiency, off-target effects and adverse immune reactions [36]. Additionally, applying these techniques to modulate the expression of a previously transfected gene would need a separate procedure, increasing the complexity, duration and cost of the treatment.
In this paper, we present a novel method that allows for cell death-regulated gene expression. This method relies on the simultaneous electrotransfer of the anticancer drug bleomycin and plasmid DNA, and it allows for control over the transfection efficiency and cell death dynamics by varying the concentration of bleomycin used. To showcase this method, we analyzed different concentrations of bleomycin and plasmid DNA in order to design an optimal combination, achieving a high level of cell death from bleomycin while maintaining localized temporary gene expression. The transfection efficiency and cell death were evaluated at different time points post-treatment. These findings may be perceived as a leading way to increase therapeutic outcomes among a range of different tumors.

Chinese hamster ovary (CHO) cells (European Collection of Authenticated cell cultures, 85050302) were used for the experiments. Cells were grown in Dulbecco’s Modified Eagle Medium (DMEM), supplemented with 1% penicillin-streptomycin, 1% l-glutamine and 10% FBS. All reagents were purchased from Sigma-Aldrich (Darmnstadt, Germany). The cells were grown in a 96 mm culture dish at 37 °C in a humidified incubator at 5% CO2. To maintain the culture, cells were passaged every 2–3 days and always a day before an experiment.

The pMAX-GFP plasmid (3486bp) (Amaxa, Cologne, Germany) coding for enhanced green fluorescent protein was used in the experiments. Plasmid concentrations of 0–400 µg/mL were used to enhance the transfer of the chemotherapeutic drug, bleomycin, and to evaluate the percentage of transfected cells. The plasmid was purified from competent DH5α cells using endo-free plasmid Giga Prep kit (Qiagen, Valencia, CA, USA), according to the manufacturer’s instructions. The concentration and the quality of the plasmid was checked using a spectrophotometer (Nanodrop 2000, Thermo Fisher, Washington, DC, USA) and gel electrophoresis.

4.4. The Measurement of DNA Electrotransfer Efficiency

Cells were electroporated in the presence of plasmid at different concentrations as described above. After 10 min of incubation, 950 μL of a growth medium (DMEM) was added to 50 μL of an electroporated cell suspension. Afterwards, 900 μL of a diluted cell suspension was transferred into 24 well plate (Plastibrand; Wertheim, Germany). Cells were grown for 24 h, and then the growth medium was removed. Each well was supplemented with 150 μL of 1× TryplE Express (Thermo Fisher, Dublin, Ireland) for the determination of transfection efficiency using a flow cytometer (BD Accuri C6, BD Biosciences, Franklin Lakes, NJ, USA). A 488 nm laser was used for cell excitation, and the fluorescence was collected using a 533/30 nm bandpass filter. The results were analyzed with BD Accuri C6 Software. This way the transfection efficiency (TE), evaluated as the percentage of GFP-positive cells, and the mean cell fluorescence (MCF) of the transfected cell population was obtained. The total fluorescence (TF) was calculated as shown in Equation (1):

A comet assay was used to evaluate DNA damage. For the comet assay, the cells were transferred to 1.5 mL tubes and supplemented with 950 µL of the DMEM medium for 10 min, then incubated for 1 h at 37 °C. After this, the cells were centrifuged at 0.2 relative centrifugal force (RCF) for 3 min, supernatant was removed, and the cells were resuspended in 130 µl of 0.5% low-melting agarose dissolved in PBS. A single drop of this solution from each experimental point was placed on microscope slides pre-coated with 1% of agarose dissolved in dH2O and covered with glass coverslips. After this, the samples were incubated for 10 min at 4 °C, after which the coverslips were removed. The slides with the cells were then lysed by placing the slides in a Coplin jar containing 2.5 M NaCl, 100 mM EDTA, and 10 mM Trizma base (pH 10) at 4 °C for at least 12 h. After that, slides were immersed in an electrophoresis solution (10 N NaOH and 200 mM EDTA, pH >13) for 20 min. Electrophoresis was then carried out at 0.72 V/cm (10 V, 300 mA) for 30 min in the same solution. Slides were washed one time in with neutralization buffer for 5 min. Comets were fixed by immersing the slides in 98% ethanol for dehydration. The drying was finished in an oven at 500 °C for 30 min, and the slides were stored in a dry place before the image analysis. On the day of analysis, gels were hydrated by incubating the slides in distilled water for 30 min. Comets were stained with 1% 10 mg/mL ethidium bromide and then covered with a glass coverslip (24 × 60 mm). CHO cell photographs were captured with a high-resolution digital camera using Motic Images Advanced 3.2. software. The image analysis computer system CASP 1.2.3 b2 was used to evaluate the DNA breaks in the cells. The software measured the percentage of DNA in the comet’s head (intact DNA) and in the comet’s tail (small pieces of cleaved DNA). The percentage of DNA in the comet’s tail was the parameter used to describe the DNA damage in each comet. The number of comets per gel (including so-called hedgehogs) was counted by eye.

A clonogenic assay (CA) was performed to evaluate end-point cell viability. In order to perform the CA, 400 cells from each experimental point were seeded to a 40 mm diameter Petri dish containing 2 mL of a growth medium for a duration of 6 days. The cells were then fixed with 70% ethanol for 10 min and then stained with crystal violet dye. The colonies were scanned with a scanner (CanoScan LiDE220, Canon, New York, USA) and counted using the CellCounter function in the open source software ImageJ (National Institutes of Health, Bethesda, MD, USA).
A flow cytometry assay (FCA) was used to determine the cell viability at short-to-medium time points after electroporation (12–72 h). The use of flow cytometry allowed for the determination of the number of cells with no ‘marker’ molecules used. 1 × 104 of cells were plated in a 24-well microplate (Plastibrand; Wertheim, Germany). At the defined time points, the cells were trypsinized with 1X TrypLE Express. Using a flow cytometer, an absolute number of cells as counted in each cell suspension sample, and the number of cells in the experimental groups was expressed as the percentage of the cells present in time-matched control.

Each experimental point was obtained from at least three independent experiments, and results are represented as the mean ± SEM. The statistical analysis was done using Microsoft Excel, and SigmaPlot software was used to produce the graphs. The statistical significance of differences between the groups was evaluated using a two-tailed Student’s t-test for independent samples. The p values < 0.05 were deemed to be statistically significant.

In summary, the combined simultaneous treatment could have applications, not only because of its ability for time-resolved transfection but also because it could reduce the amount of potentially invasive treatments needed, especially for deep-seated tumors, thus reducing the time and cost needed for procedures.

This research is funded by the European Social Fund according to the activity ‘Improvement of researchers’ qualification by implementing world-class R&D projects’ of Measure No. 09.3.3-LMT-K-712-01-0188. 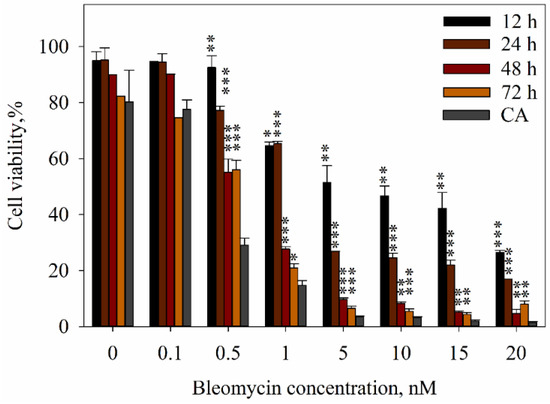 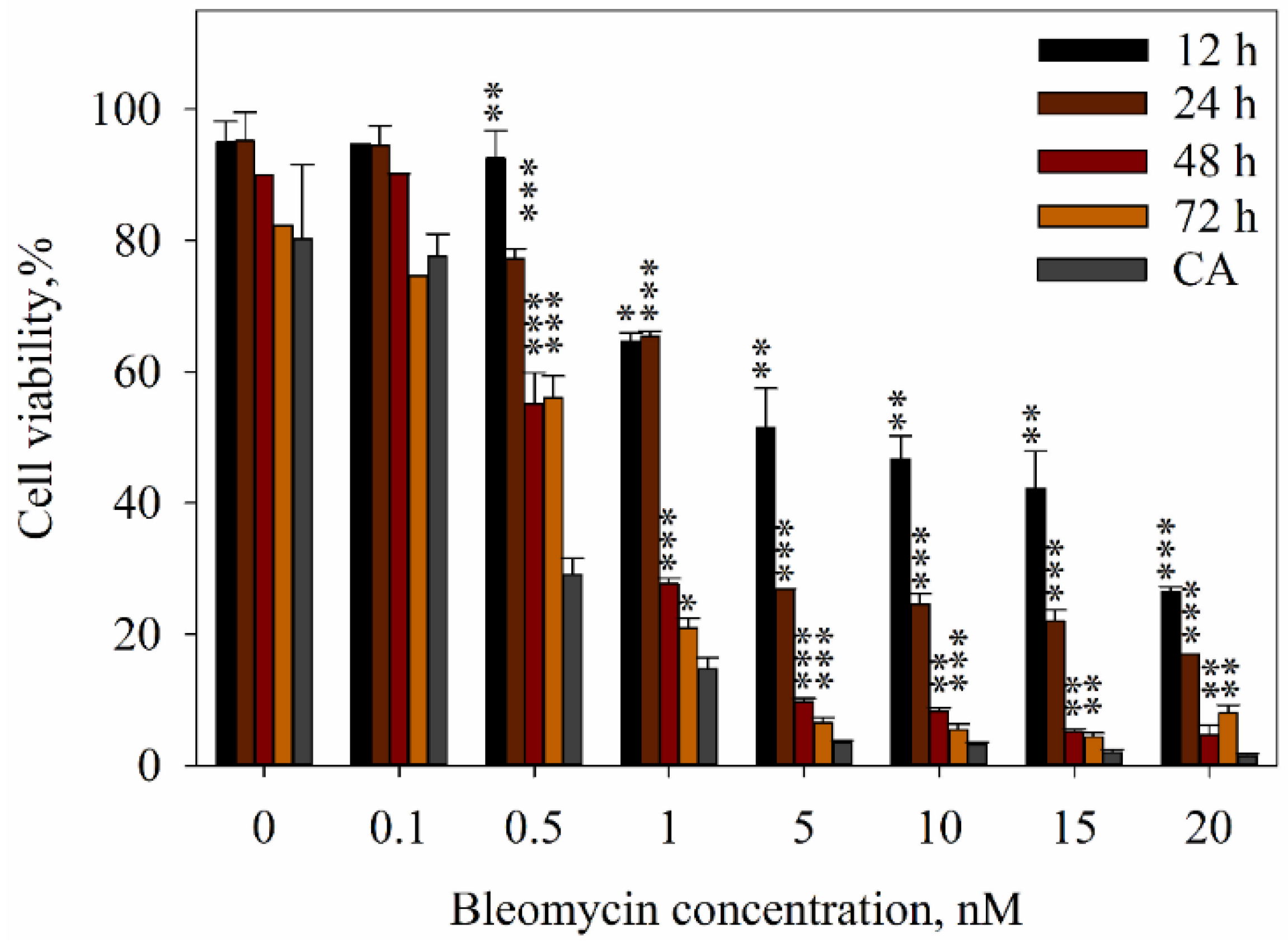