Intergeneric Relationships within the Family Salicaceae s.l. Based on Plastid Phylogenomics

Many Salicaceae s.l. plants are recognized for their important role in the production of products such as wood, oils, and medicines, and as a model organism in life studies. However, the difference in plastid sequence, phylogenetic relationships, and lineage diversification of the family Salicaceae s.l. remain poorly understood. In this study, we compare 24 species representing 18 genera of the family. Simple sequence repeats (SSRs) are considered effective molecular markers for plant species identification and population genetics. Among them, a total of 1798 SSRs were identified, among which mononucleotide repeat was the most common with 1455 accounts representing 80.92% of the total. Most of the SSRs are located in the non-coding region. We also identified five other types of repeats, including 1750 tandems, 434 forward, 407 palindromic, 86 reverse, and 30 complementary repeats. The species in Salicaceae s.l. have a conserved plastid genome. Each plastome presented a typical quadripartite structure and varied in size due to the expansion and contraction of the inverted repeat (IR) boundary, lacking major structural variations, but we identified six divergence hotspot regions. We obtained phylogenetic relationships of 18 genera in Salicaceae s.l. and the 24 species formed a highly supported lineage. Casearia was identified as the basal clade. The divergence time between Salicaceae s.l. and the outgroup was estimated as ~93 Mya; Salix, and Populus diverged around 34 Mya, consistent with the previously reported time. Our research will contribute to a better understanding of the phylogenetic relationships among the members of the Salicaceae s.l. View Full-Text
Keywords: Salicaceae; phylogenetic relationship; plastid genome; comparative genomics; repeat sequences Salicaceae; phylogenetic relationship; plastid genome; comparative genomics; repeat sequences
►▼ Show Figures 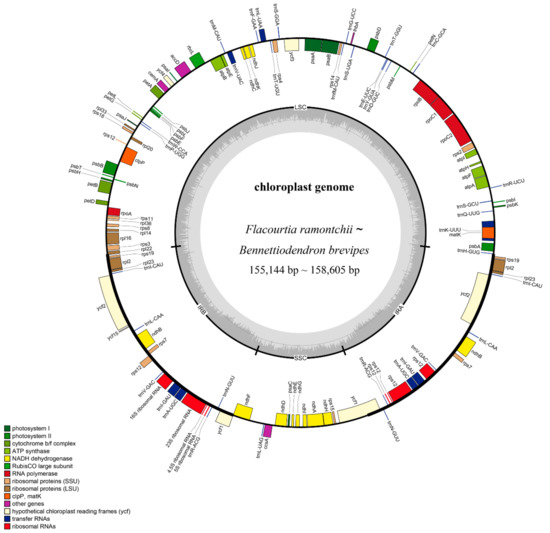