Platinum Salts in Patients with Breast Cancer: A Focus on Predictive Factors

Breast cancer (BC) is the most frequent oncologic cause of death among women and the improvement of its treatments is compelling. Platinum salts (e.g., carboplatin, cisplatin, and oxaliplatin) are old drugs still used to treat BC, especially the triple-negative subgroup. However, only a subset of patients see a concrete benefit from these drugs, raising the question of how to select them properly. Therefore, predictive biomarkers for platinum salts in BC still represent an unmet clinical need. Here, we review clinical and preclinical works in order to summarize the current evidence about predictive or putative platinum salt biomarkers in BC. The association between BRCA1/2 gene mutations and platinum sensitivity has been largely described. However, beyond the mutations of these two genes, several other proteins belonging to the homologous recombination pathways have been linked to platinum response, defining the concept of BRCAness. Several works, here reviewed, have tried to capture BRCAness through different strategies, such as homologous recombination deficiency (HRD) score and genetic signatures. Moreover, p53 and its family members (p63 and p73) might also be used as predictors of platinum response. Finally, we describe the mounting preclinical evidence regarding base excision repair deficiency as a possible new platinum biomarker. View Full-Text
Keywords: platinum; breast cancer; BRCA; BRCAness; homologous recombination repair; base excision repair platinum; breast cancer; BRCA; BRCAness; homologous recombination repair; base excision repair
►▼ Show Figures 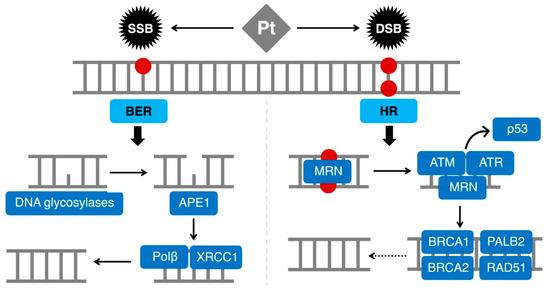