Quantitative Biology of Human Shelterin and Telomerase: Searching for the Weakest Point

Telomeres and Longevity: A Cause or an Effect?

Telomere dynamics have been found to be better predictors of survival and mortality than chronological age. Telomeres, the caps that protect the end of linear chromosomes, are known to shorten with age, inducing cell senescence and aging. Furthermore, differences in age-related telomere attrition were established between short-lived and long-lived organisms. However, whether telomere length is a “biological thermometer” that reflects the biological state at a certain point in life or a biomarker that can influence biological conditions, delay senescence and promote longevity is still an ongoing debate. We cross-sectionally tested telomere length in different tissues of two long-lived (naked mole-rat and Spalax) and two short-lived (rat and mice) species to tease out this enigma. While blood telomere length of the naked mole-rat (NMR) did not shorten with age but rather showed a mild elongation, telomere length in three tissues tested in the Spalax declined with age, just like in short-lived rodents. These findings in the NMR, suggest an age buffering mechanism, while in Spalax tissues the shortening of the telomeres are in spite of its extreme longevity traits. Therefore, using long-lived species as models for understanding the role of telomeres in longevity is of great importance since they may encompass mechanisms that postpone aging. View Full-Text
Keywords: telomere length; naked mole-rats; blind mole-rats (Spalax); telomeres; long-lived; age; longevity telomere length; naked mole-rats; blind mole-rats (Spalax); telomeres; long-lived; age; longevity
►▼ Show Figures 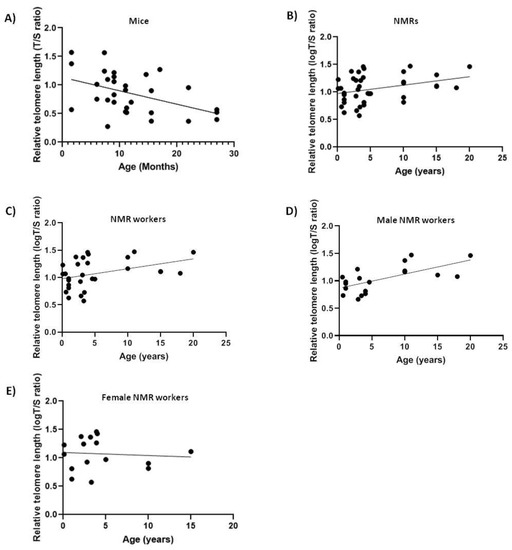