Alzheimer’s disease (AD) is a neurodegenerative disease that is the main cause of dementia in the elderly. The aggregation of β-amyloid peptides is one of the characterizing pathological changes of AD. Topiramate is an antiepileptic drug, which in addition, is used in the treatment of many neuropsychiatric disorders. In this study, the therapeutic effects of topiramate were investigated in a transgenic mouse model of cerebral amyloidosis (APP/PS1 mice). Before, during, and after topiramate treatment, behavioral tests were performed. Following a treatment period of 21 days, topiramate significantly ameliorated deficits in nest-constructing capability as well as in social interaction. Thereafter, brain sections of mice were analyzed, and a significant attenuation of microglial activation as well as β-amyloid deposition was observed in sections from topiramate-treated APP/PS1 mice. Therefore, topiramate could be considered as a promising drug in the treatment of human AD.
Keywords: Alzheimer’s disease; APP/PS1 transgenic mouse; topiramate; amyloidosis Alzheimer’s disease; APP/PS1 transgenic mouse; topiramate; amyloidosis

Alzheimer’s disease (AD) is a neurological disorder and the main cause of dementia in the elderly. The disease is characterized by memory loss and the deposition of β-amyloid plaques and neurofibrillary tangles (NFTs) in the brain [1]. Impairments in cognitive ability and social interaction caused by neurotoxicity and neuroinflammation are associated with AD. Amyloid plaques are extracellular deposits of amyloid beta (Aβ) in the grey matter of AD brains, which is one of the characterizing pathological changes [2].
Patients with AD have an increased risk of developing seizures or epilepsy [3]. It was reported that generalized and unprovoked seizures occur late in the course of AD, and patients with an early onset of AD are particularly susceptible to develop seizures [4]. For this reason, the use of antiepileptic drugs (AED) for patients with higher brain dysfunction has been analyzed in several clinical studies [3]. For instance, the anticonvulsant and mood-stabilizing agent valproic acid (VPA) has been widely used for the treatment of epilepsy. VPA was found to decrease β-amyloid production and aggregation through an inhibition of GSK-3beta-mediated gamma secretase cleavage of APP in vitro and in vivo [5]. Many other potential antiepileptic agents have been tested acting on various mechanisms of epilepsy. Topiramate (Figure 1) is a Food and Drug Administration (FDA)-approved drug that is frequently prescribed for epilepsy and the prevention of migraines. It is also an AED, which is used to slow down the symptoms of AD that have been shown to be effective in the treatment of many neuropsychiatric disorders.
Several transgenic mouse models are available to evaluate memory loss, behavioral deficits, and social interaction ability, all of which are associated with cerebral amyloidosis. Transgenic animal models can reconstruct cellular, biochemical, and molecular alterations associated with human diseases, and may help identify key disease mechanisms [6]. For instance, behavioral deficits could be ameliorated after the treatment of APP/PS1, JNLP3, and APP23 mice with cannabidiol and oridonin [7,8]. In APP/PS1 mice, amyloid plaque deposition starts at approximately six weeks of age in the neocortex. Deposits appear in the hippocampus at about three to four months and in the striatum, thalamus, and brainstem at four to five months. A study published a few years ago reported the effect of topiramate in combination with levetiracetam on APPswe/PS1dE9 mice after 30 days of treatment. In our study, we used for a limited time topiramate alone in an APP/PS1-21 transgenic mouse model, and reported its effects on social behavior and the amelioration of disease pathology.

At the beginning of our experimental treatments and after 10 days, no significant differences regarding interactive behaviors were observed between APP/PS1 mice treated with topiramate and the non-treated controls. However, after 21 days of treatment, topiramate restored the impairment observed in non-treated mice by significantly increasing the frequency of interactive behavior (control = 5.571 ± 1.631, topiramate = 12.00 ± 1.543, p < 0.05, n = 6) (Figure 2A). No significant effect was observed in the distance traveled between the controls and topiramate-treated mice (Figure 2B), which means that the motor function was not damaged.

APP/PS1 mice were further tested for the effect of topiramate treatment on affiliative behavior. We observed an impairment of nesting capacity in non-treated APP/PS1 mice (previously published data) [8]. On the first day of treatment with topiramate (Day 1), no significant difference was observed between treated and non-treated mice (control = 1.143 ± 0.184, topiramate = 1.357 ± 0.170, n = 6) (Figure 3A). We observed the same result after 11 days of treatment with topiramate (control = 1.500 ± 0.154, topiramate = 1.857 ± 0.142, n = 6) (Figure 3B). However, after 21 days of treatment, a significant difference between treated and non-treated mice was observable (control = 1.286 ± 0.1844, topiramate = 1.929 ± 0.1700, p < 0.05, n = 6) (Figure 3C), by an immediate chewing and tearing of the paper towel fragments, which were tidily torn into pieces and grouped into a corner of the cage. In contrast, APP/PS1 transgenic mice from the non-treated group slightly chewed the paper towels, with no real destruction observed, and they were rather found littered all over the cage.
After this restoration of behavioral function by topiramate, the effects regarding neuropathological changes and neuroinflammation were studied.

2.3. Effects of Topiramate on Neuroinflammation and Amyloidosis

Topiramate was purchased from Carbosynth Ltd. (Compton, Berkshire, UK). For oral treatment, topiramate was suspended in 1% carboxymethylcellulose (CMC, Blanose, Hercules-Aqualon, Düsseldorf, Germany) and administered by gavage at a dose of 20 mg/kg. Control mice received an equivalent volume of CMC.

Two groups of transgenic mice (n = 6, three males and three females at the age of 5 months) were used in this study. The treatment was applied for 21 days: 1. Topiramate treatment (daily, 20 mg/kg bodyweight), 2. Vehicle-treated used as control.

We have performed the social interaction assay according to previous protocols with minor modifications [9]. The experiment was recorded in order to monitor all the distinct behaviors from control and topiramate-treated APP/PS1 mice (referred to as the resident in this assay) in the presence and absence of another mouse (referred to as the intruder). Each mouse was placed in a clean plastic cage and allowed to accommodate for 15 min (resident mouse). Thereafter, an age, weight, and gender-matched and non-treated naïve mouse referred to as the intruder mouse was introduced into the cage for another 15 min. The 30-min experiments were videotaped, and identifiable independent and interactive behaviors were recorded by three independent observers who were blinded to the different treatments. The resident mouse was allowed to spend 15 min alone and 15 min with the intruder, while the intruder mouse stayed with the resident mouse for 15 min.

A nest construction assay was modified to determine the deficits in affiliative/social behavior of APP/PS1 mice and potential changes following treatment. For this purpose, different mice treated with topiramate or control were housed in clean plastic cages for 24 hours. At the same time, 1 cm of wood chip beddings were introduced into the cages. In order to monitor the mice nest-construction capacity, each cage was supplied with a paper towel that had been turned into 5 × 5 cm square pieces. The next morning, individual cages were inspected, and the next construction was scored using a three-point system as reported in our previous studies [8].

Topiramate-treated and control mice were sacrificed after 21 days of treatment. They were perfused intracardially with 4 °C, 4% paraformaldehyde in PBS (phosphate buffer saline). Brains were quickly removed and post-fixed in 4% paraformaldehyde overnight at 4 °C. Brains were then cut into two hemispheres, embedded in paraffin, serially sectioned (3 µm), and mounted on silan-covered slides. Hemispheres sections were stained by immunohistochemistry as described previously, with the following antibodies: β-amyloid (1:100; Abcam, Cambridge, UK) for Aβ deposition, and Iba-1 (1:200; Wako, Neuss, Germany) for activated microglia. For data analysis, hemisphere sections were examined using a Nikon Coolscope light microscope. Two independent observers randomly numbered and analyzed the different sections. The total number of Aβ plaques and microglia cells positive for Iba-1 staining in the neocortex and hippocampus was calculated. Images of cross-sections were captured and areas of interest (neocortex and hippocampus) were outlined and analyzed. Furthermore, area percentages of specific immunoreactivity (IR) were also calculated.

Differences of plaque/cell counts, area percentages, and behavioral data were analyzed by unpaired t-tests (Graph Pad Prism 6.0 software). For all the statistical analyses, significance levels were set at p < 0.05.

The authors would like to thank. Jucker for providing male transgenic APP/PS1 mice for breeding. 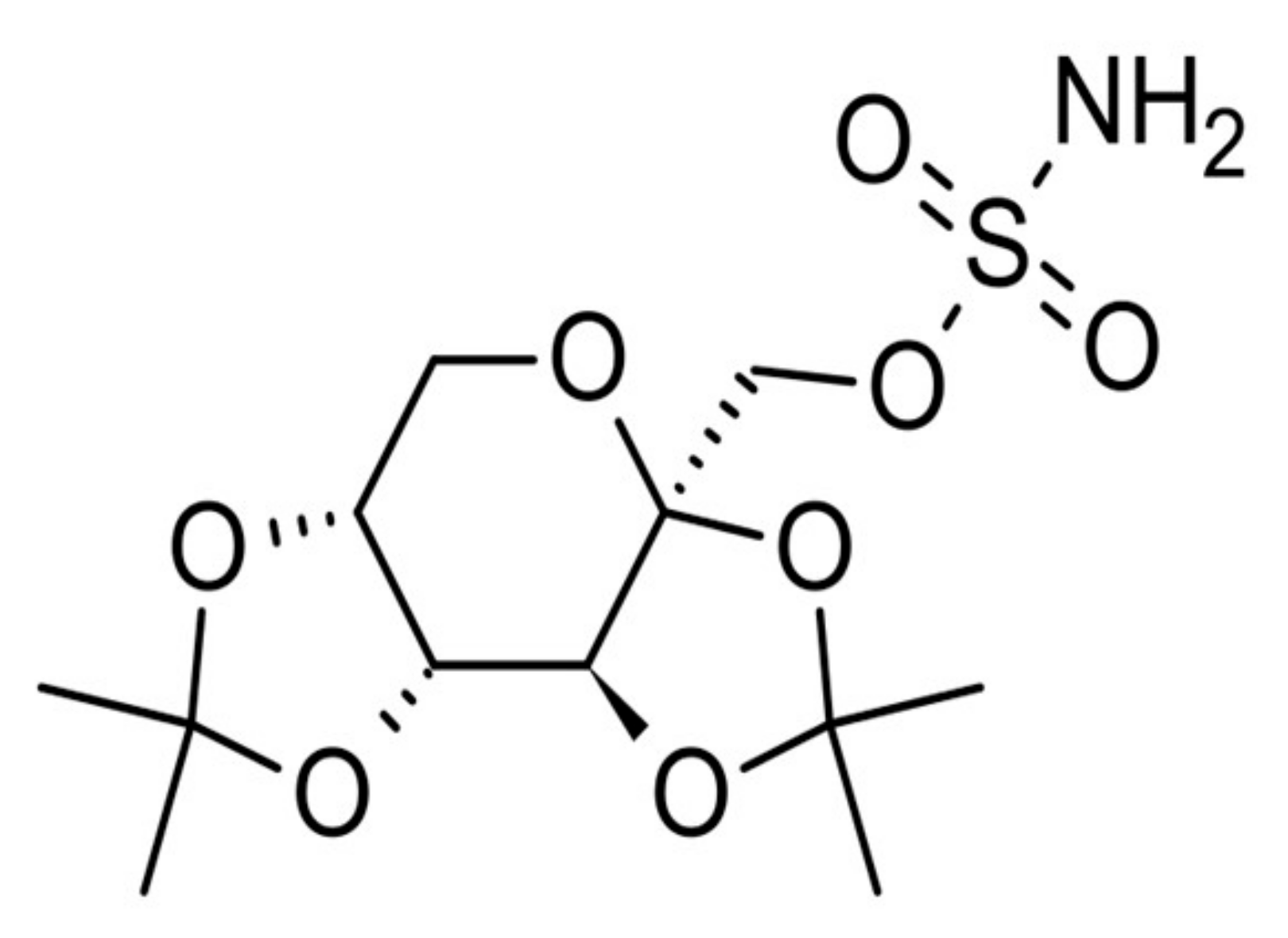 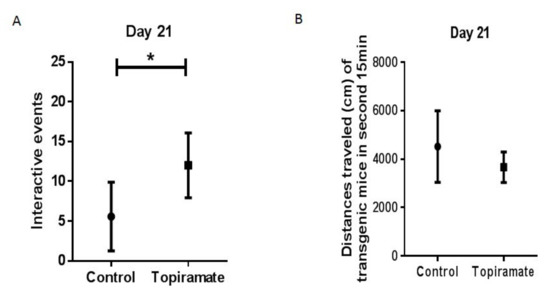 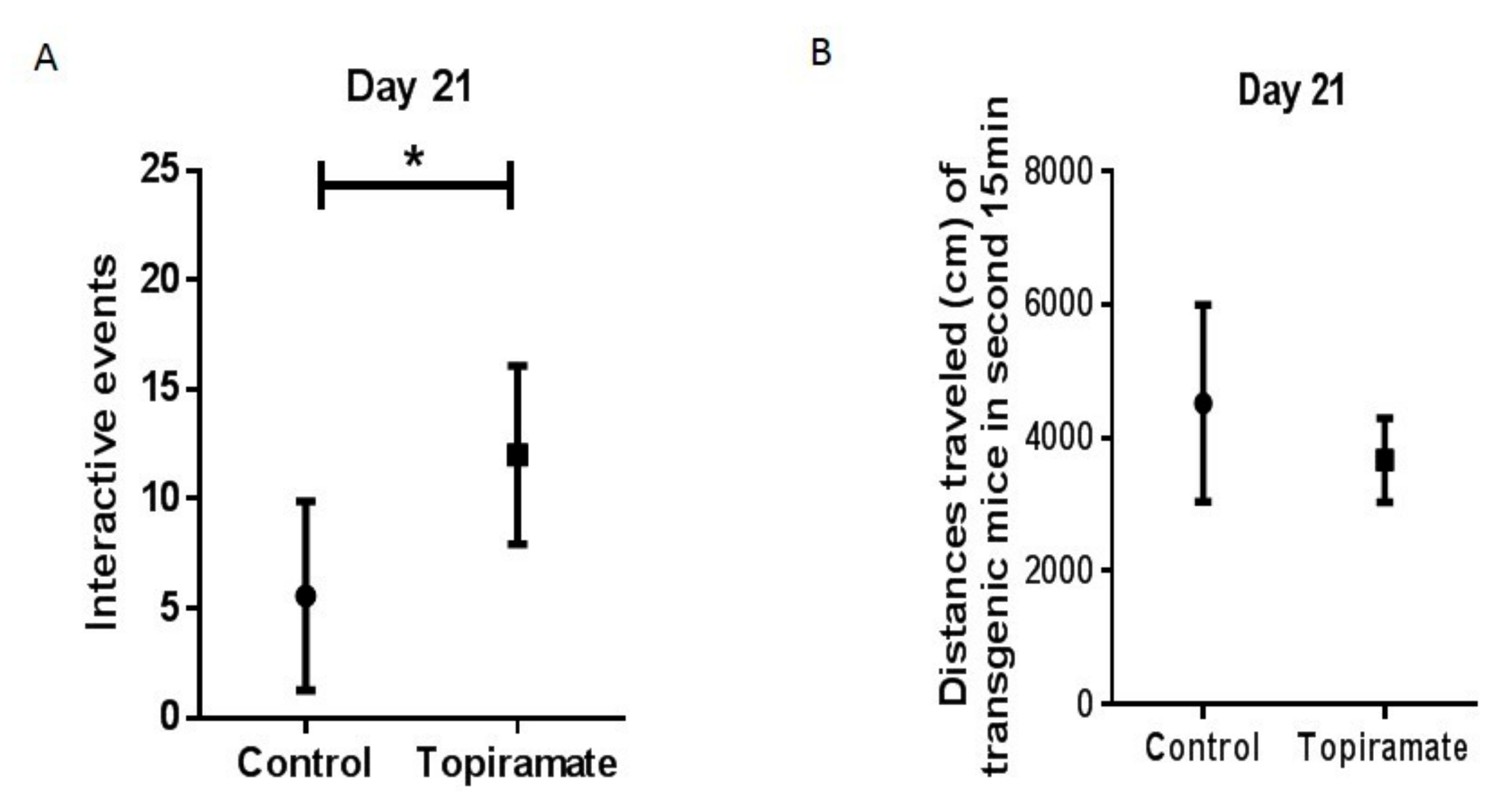 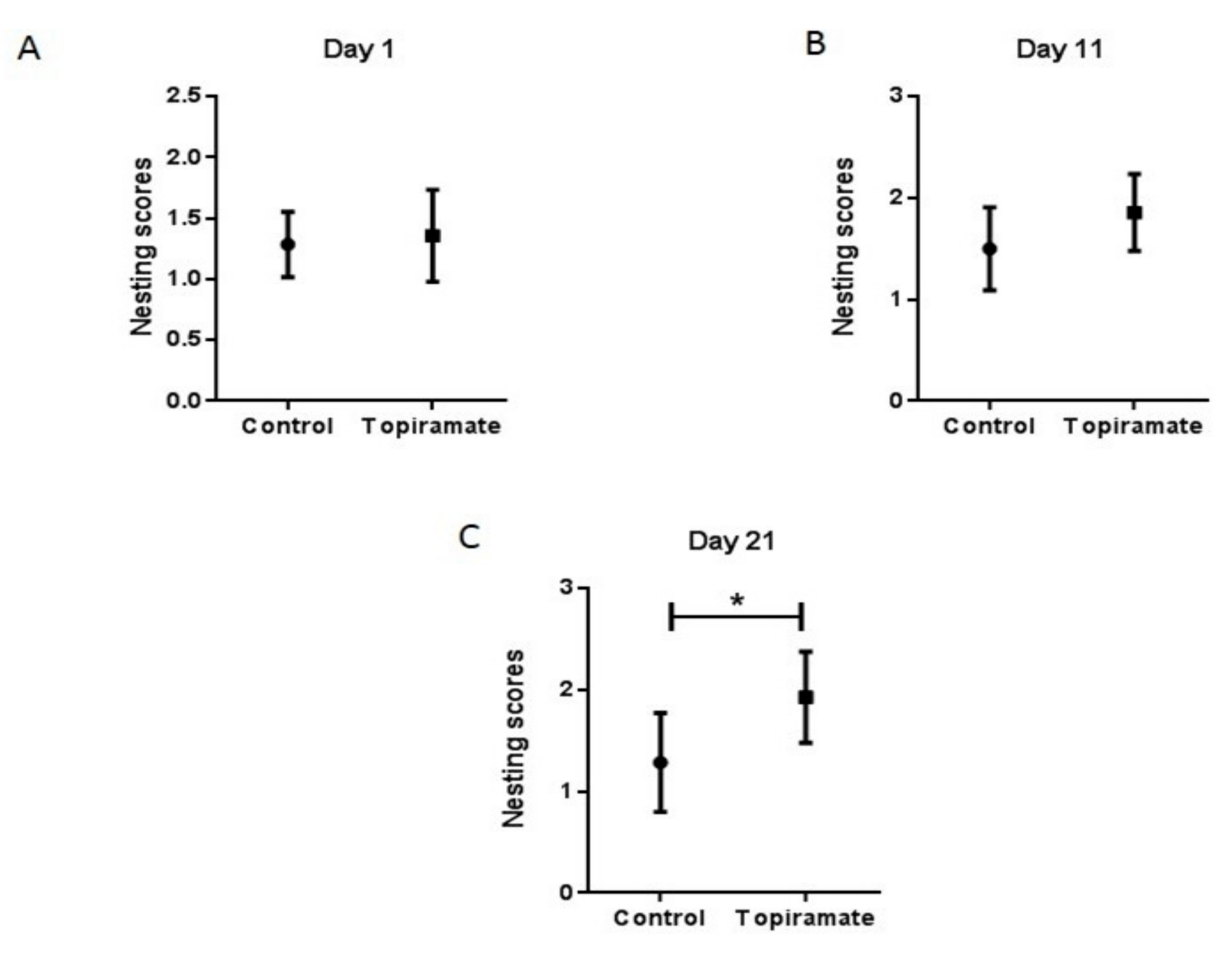 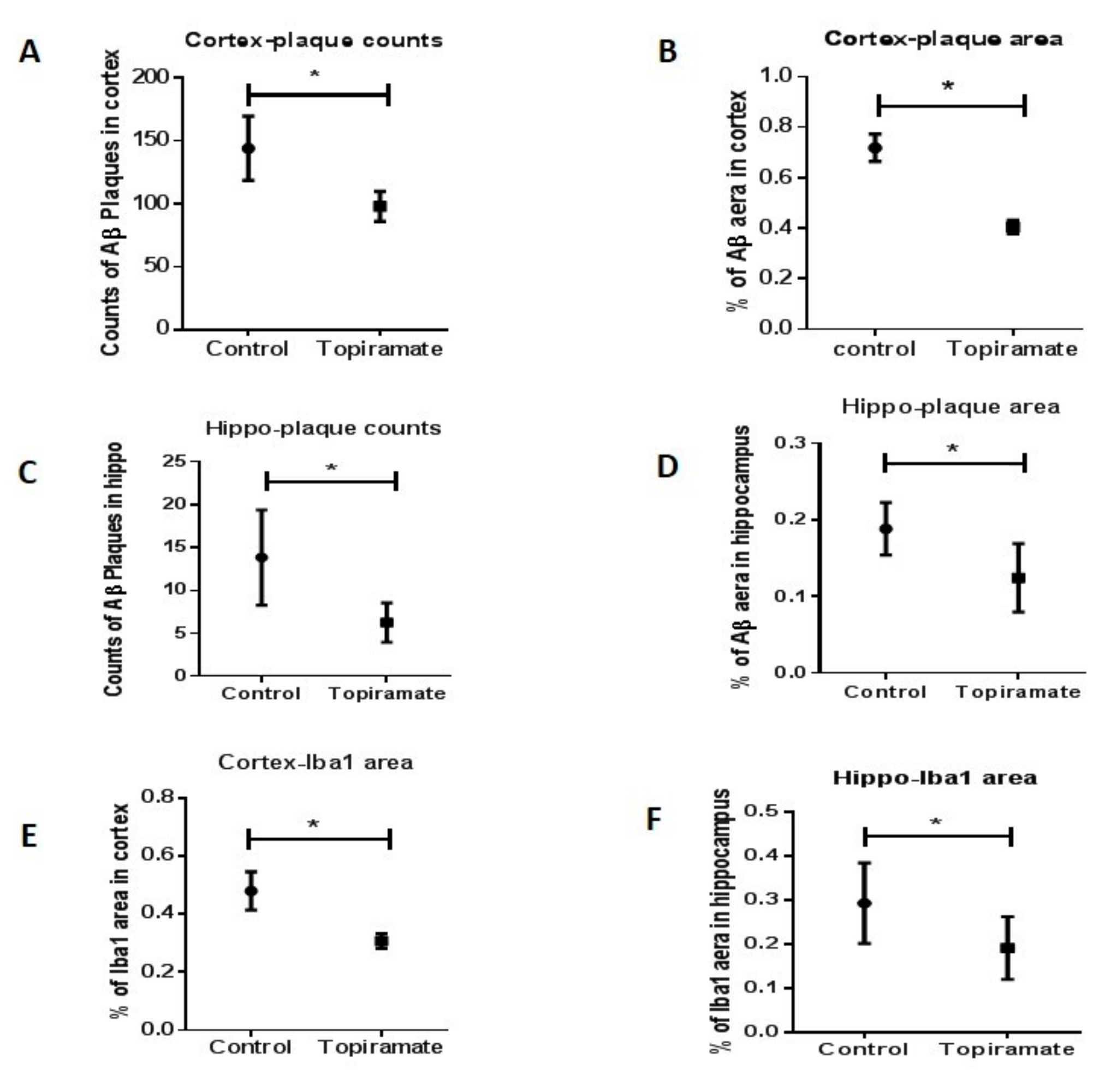 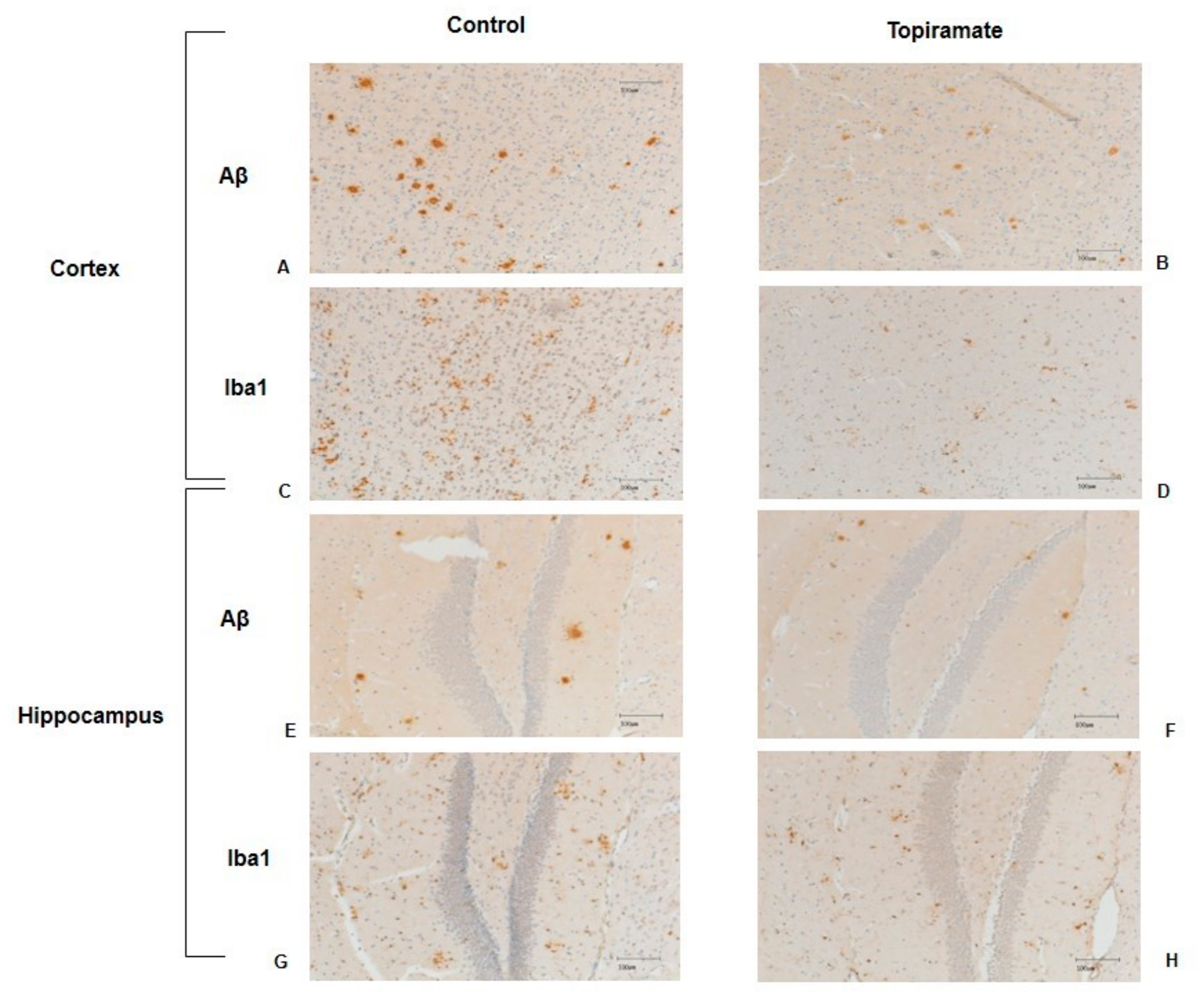