Translatomics: The Global View of Translation
Next Article in Special Issue

Actin Bundles in The Pollen Tube

Cytoskeleton, Transglutaminase and Gametophytic Self-Incompatibility in the Malinae (Rosaceae)

Self-incompatibility (SI) is a complex process, one out of several mechanisms that prevent plants from self-fertilizing to maintain and increase the genetic variability. This process leads to the rejection of the male gametophyte and requires the co-participation of numerous molecules. Plants have evolved two distinct SI systems, the sporophytic (SSI) and the gametophytic (GSI) systems. The two SI systems are markedly characterized by different genes and proteins and each single system can also be divided into distinct subgroups; whatever the mechanism, the purpose is the same, i.e., to prevent self-fertilization. In Malinae, a subtribe in the Rosaceae family, i.e., Pyrus communis and Malus domestica, the GSI requires the production of female determinants, known as S-RNases, which penetrate the pollen tube to interact with the male determinants. Beyond this, the penetration of S-RNase into the pollen tube triggers a series of responses involving membrane proteins, such as phospholipases, intracellular variations of cytoplasmic Ca2+, production of reactive oxygen species (ROS) and altered enzymatic activities, such as that of transglutaminase (TGase). TGases are widespread enzymes that catalyze the post-translational conjugation of polyamines (PAs) to different protein targets and/or the cross-linking of substrate proteins leading to the formation of cross-linked products with high molecular mass. When actin and tubulin are the substrates, this destabilizes the cytoskeleton and inhibits the pollen-tube’s growth process. In this review, we will summarize the current knowledge of the relationship between S-RNase penetration, TGase activity and cytoskeleton function during GSI in the Malinae.
Keywords: self-incompatibility; pear; cytoskeleton; transglutaminase; pollen tube self-incompatibility; pear; cytoskeleton; transglutaminase; pollen tube

1. Introduction: The Molecular Basis of S-RNase-Based Gametophytic Self-Incompatibility in the Malinae

2. Pollen Tube Growth and How It Is Impacted by Self-Incompatibility

The cytoskeleton plays an important role in the development of pollen tubes as it promotes organelle and vesicle motility and facilitates the correct structuring of the cell wall. AFs are generally organized into three arrays: short filaments at the apex, the actin fringe in the sub-apex, and longitudinal actin strands in the rest of the cytoplasm. The dynamics and function of MTs in the pollen tube is not yet well defined [18,19]. As in other plant cell types, it is reasonable to think that the two cytoskeletal systems interact by affecting their reciprocal dynamics and by cooperating in the localization and distribution of organelles and secretory vesicles. In the latter case, AFs determine their fast and long-distance transport while MTs are likely involved in their local and precise positioning [20]. Secretory vesicles contain all the material necessary for pollen tube growth, which occurs mainly at the apex [21] and mainly depends on vesicular secretion that occurs very precisely at the tip. This is essential to convey new plasma membrane, methyl-esterified pectins and proteins that are used for the building of the new cell wall [22,23,24]. The subsequent conversion of methyl-esterified pectins into acidic pectins and their Ca2+-dependent cross-linking stiffens the cell wall thereby slowing down cell growth. The alternation between cell wall relaxation and stiffening, together with the action of turgor pressure, determines the so-called “pulsed” or “oscillatory” growth of pollen tubes. This sequence of events is repeated regularly and implies oscillation of various molecular mechanisms, including Ca2+, ROS and GTPases [25]. The cytoplasmic influx of high amounts of Ca2+ might alter ROS concentration because NADPH oxidase is directly regulated by Ca2+ [26]. ROS are extremely reactive chemicals containing oxygen, as peroxides, superoxide, hydroxyl radicals, and singlet oxygen. ROS are formed as a natural product of oxygen metabolism and play an important role in cellular signaling and homeostasis. During stress conditions, ROS levels can increase significantly, causing damage to cell structures (oxidative stress) [27]. In the specific case of SI response in Pyrus pyrifolia, suppression of the growth of SI pollen tubes in pear also involves changes in ROS levels, probably linked to variations in intracellular Ca2+ [14,28]. An interesting fact also arises from the evidence that ROS levels increase in pear pollen tubes grown in the presence of polyamines [29]. Excess of ROS can affect the activity of proteins in the apical region and modifies the structure of AFs [30,31]. The latter event is consequently responsible for changes in the transport and in the accumulation of secretory vesicles into the apex.
It is widely accepted that the growth of pollen tubes is inhibited by S-RNase degrading the RNA of incompatible pollen tubes. However, Li and coworkers demonstrated that the arrest of apple pollen growth was dependent also on the inhibition of pollen soluble pyrophosphatase activity, indicating that RNA degradation may not be the only mechanism required for pollen rejection in apple. The identified soluble inorganic pyrophosphatase (MdPPa) was highly expressed in germinated pollen and interacted with S-RNases, both in vivo and in vitro assays, suggesting that it plays a role in the apple SI response. MdPPa was identical in several apple cultivars and its activity decreased in SI-treated pollen tubes, suggesting that MdPPa is involved in the SI response [11].
Moreover, in Pyrus, S-RNase had several different effects on pollen tubes during SI induction in vitro and altered the fine modulation of ROS and Ca2+. S-RNase disrupted tip-localized ROS and decrease the Ca2+ current and, finally, degraded the nuclear DNA. The authors speculated that S-RNase simultaneously decrease Ca2+ current and inhibit ROS formation; however, as Ca2+ currents and ROS production are mutually interconnected, it is difficult to distinguish the order in time between tip-localized ROS disruption and Ca2+ current decrease [28]. Cytoplasmic Ca2+ changes drastically affected the dynamics of AFs and MTs [13,28]. If AFs are not arranged correctly, this causes improper secretion and thus results in deeply altered cell wall deposition. If the amount of ROS increases in an uncontrolled manner [32], it can cause both toxic effects and an imbalance in other components such as cytoplasmic Ca2+. Taken together, S-RNase in Malinae may participate in a more complicated pathway, such as PCD, following its secretion from the style to its ultimate function in inhibiting self-pollen growth.

3. The TGase-Cytoskeleton Interplay as a Crucial Player of the SI Process

Although the process of SI has been studied for decades, many aspects remain to be defined, including the one concerning the involvement of the cytoskeleton. The fundamental question is whether the cytoskeleton is a target of pollen tube growth arrest or whether it is an active part of the rejection process. A second important aspect to be defined is the link between the actual onset of incompatibility (hence the entry of RNase) and the modifications induced to the cytoskeleton. In this context, the role of TGase seems to be crucial, as it modifies post-translationally both actin and tubulin. Defining the role of TGase might require several biochemical and molecular approaches. Certainly, the overexpression of TGase in compatible and SI pollen would be of great interest to verify how crucial cytoskeleton modifications are during the SI response.

S.D.D., I.A., L.P., and G.C. have contributed equally to the drafting, review, and editing of the manuscript.

This research was funded by the Italian Ministry of Education, Universities and Research under PRIN 2015; project number 2015BPM9H3_003 (Investigating Self Incompatibility DEterminants in fruit trees, ISIDE). 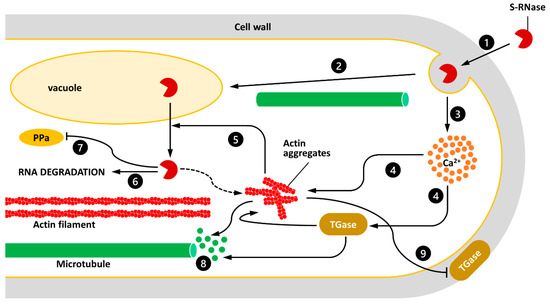 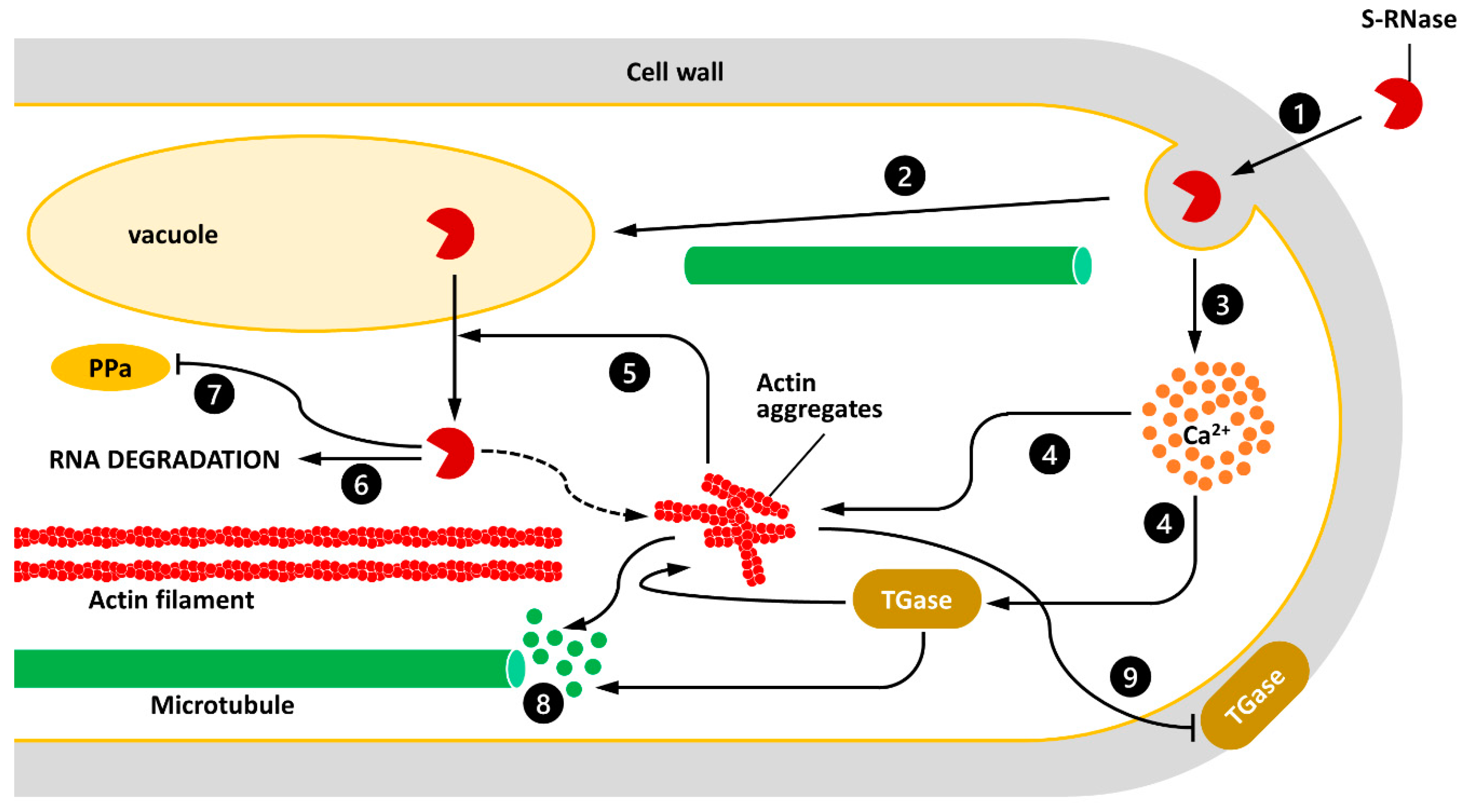