HPV-Mediated Resistance to TNF and TRAIL Is Characterized by Global Alterations in Apoptosis Regulatory Factors, Dysregulation of Death Receptors, and Induction of ROS/RNS
Next Article in Special Issue

Molecular Mechanisms Underlying the Link between Diet and DNA Methylation

Following their planktonic phase, the larvae of benthic marine organisms must locate a suitable habitat to settle and metamorphose. For oysters, larval adhesion occurs at the pediveliger stage with the secretion of a proteinaceous bioadhesive produced by the foot, a specialized and ephemeral organ. Oyster bioadhesive is highly resistant to proteomic extraction and is only produced in very low quantities, which explains why it has been very little examined in larvae to date. In silico analysis of nucleic acid databases could help to identify genes of interest implicated in settlement. In this work, the publicly available transcriptome of Pacific oyster Crassostrea gigas over its developmental stages was mined to select genes highly expressed at the pediveliger stage. Our analysis revealed 59 sequences potentially implicated in adhesion of C. gigas larvae. Some related proteins contain conserved domains already described in other bioadhesives. We propose a hypothetic composition of C. gigas bioadhesive in which the protein constituent is probably composed of collagen and the von Willebrand Factor domain could play a role in adhesive cohesion. Genes coding for enzymes implicated in DOPA chemistry were also detected, indicating that this modification is also potentially present in the adhesive of pediveliger larvae. View Full-Text
Keywords: Crassostrea gigas; Pacific oyster; pediveliger larvae; bioadhesive; transcriptome Crassostrea gigas; Pacific oyster; pediveliger larvae; bioadhesive; transcriptome
►▼ Show Figures 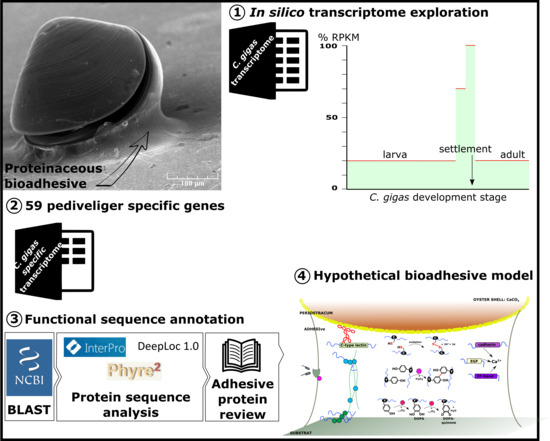