Glycosylation in the Thyroid Gland: Vital Aspects of Glycoprotein Function in Thyrocyte Physiology and Thyroid Disorders
Next Article in Special Issue

The Dual Role of MicroRNAs in Colorectal Cancer Progression

Colorectal cancer (CRC) is responsible for one of the major cancer incidence and mortality worldwide. It is well known that MicroRNAs (miRNAs) play vital roles in maintaining the cell development and other physiological processes, as well as, the aberrant expression of numerous miRNAs involved in CRC progression. MiRNAs are a class of small, endogenous, non-coding, single-stranded RNAs that bind to the 3’-untranslated region (3′-UTR) complementary sequences of their target mRNA, resulting in mRNA degradation or inhibition of its translation as a post-transcriptional regulators. Moreover, miRNAs also can target the long non-coding RNA (lncRNA) to regulate the expression of its target genes involved in proliferation and metastasis of CRC. The functions of these dysregulated miRNAs appear to be context specific, with evidence of having a dual role in both oncogenes and tumor suppression depending on the cellular environment in which they are expressed. Therefore, the unique expression profiles of miRNAs relate to the diagnosis, prognosis, and therapeutic outcome in CRC. In this review, we focused on several oncogenic and tumor-suppressive miRNAs specific to CRC, and assess their functions to uncover the molecular mechanisms of tumor initiation and progression in CRC. These data promised that miRNAs can be used as early detection biomarkers and potential therapeutic target in CRC patients. View Full-Text
Keywords: colorectal cancer (CRC); oncogenic miRNAs; tumor-suppressive miRNAs; biomarkers colorectal cancer (CRC); oncogenic miRNAs; tumor-suppressive miRNAs; biomarkers
►▼ Show Figures 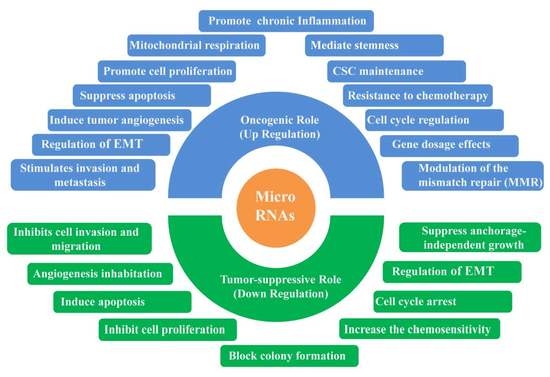