The Pathways of the iRFP713 Unfolding Induced by Different Denaturants

Near-infrared fluorescent proteins (NIR FPs) based on the complexes of bacterial phytochromes with their natural biliverdin chromophore are widely used as genetically encoded optical probes for visualization of cellular processes and deep-tissue imaging of cells and organs in living animals. In this work, we show that the steady-state and kinetic dependencies of the various spectral characteristics of iRFP713, developed from the bacterial phytochrome RpBphP2 and recorded at protein unfolding induced by guanidine hydrochloride (GdnHCl), guanidine thiocyanate (GTC), and urea, differ substantially. A study of the unfolding of three single-tryptophan mutant forms of iRFP713 expectedly revealed that protein unfolding begins with the dissociation of the native dimer, while the monomers remain compact. A further increase in the denaturant concentration leads to the formation of an intermediate state of iRFP713 having hydrophobic areas exposed on the protein surface (I). The total surface charge of iRFP713 (pI 5.86) changes from negative to positive with an increase in the concentration of GdnHCl and GTC because the negative charge of glutamic and aspartic acids is neutralized by forming salt bridges between the carboxyl groups and GdnH+ ions and because the guanidinium cations bind to amide groups of glutamines and asparagines. The coincidence of both the concentration of the denaturants at which the intermediate state of iRFP713 accumulates and the concentration of GdnH+ ions at which the neutralization of the surface charge of the protein in this state is ensured results in strong protein aggregation. This is evidently realized by iRFP713 unfolding by GTC. At the unfolding of the protein by GdnHCl, an intermediate state is populated at higher denaturant concentrations and a strong aggregation is not observed. As expected, protein aggregates are not formed in the presence of the urea. The aggregation of the protein upon neutralization of the charge on the macromolecule surface is the main indicator of the intermediate state of protein. The unfolded state of iRFP713, whose formation is accompanied by a significant decrease in the parameter A, was found to have a different residual structure in the denaturants used. View Full-Text
Keywords: iRFP713; protein unfolding; protein aggregation; intermediate state; guanidinium cation iRFP713; protein unfolding; protein aggregation; intermediate state; guanidinium cation
►▼ Show Figures 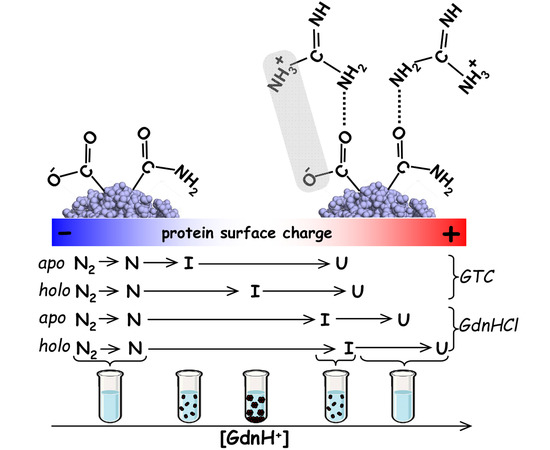