TGF-β and BMPR2 Signaling in PAH: Two Black Sheep in One Family
Next Article in Special Issue

Review
Developmental Programming of the Metabolic Syndrome: Can We Reprogram with Resveratrol?
by

:
Metabolic syndrome (MetS) is a mounting epidemic worldwide. MetS can start in early life, in a microenvironment that is now known as the developmental origins of health and disease (DOHaD). The concept of DOHaD also offers opportunities for reprogramming strategies that aim to reverse programming processes in early life. Resveratrol, a polyphenolic compound has a wide spectrum of beneficial effects on human health. In this review, we first summarize the epidemiological and experimental evidence supporting the developmental programming of MetS. This review also presents an overview of the evidence linking different molecular targets of resveratrol to developmental programming of MetS-related disorders. This will be followed by studies documenting resveratrol as a reprogramming agent to protect against MetS-related disorders. Further clinical studies are required in order to bridge the gap between animal models and clinical trials in order to establish the effective dose and therapeutic duration for resveratrol as a reprogramming therapy on MetS disorders from developmental origins.
Keywords:
developmental origins of health and disease (DOHaD); hypertension; metabolic syndrome; nitric oxide; nutrient-sensing signal; obesity; oxidative stress; renin-angiotensin system; resveratrol

Metabolic syndrome (MetS) is a critical challenge for public health. Worldwide, two thirds of the deaths resulting from non-communicable diseases are mainly caused by MetS and related disorders [1]. MetS is a cluster of medical conditions including hypertension, obesity, dyslipidemia, non-alcoholic fatty liver disease (NAFLD), hyperglycemia and insulin resistance [2]. Despite the recent advances in medical and surgical treatment, there is still a global rising in the incidence and prevalence of MetS. Recent studies suggest that a suboptimal early-life environment can cause permanent changes of function and structure in specific organs that may increase the risk for developing MetS in later life [3,4,5], now being termed the developmental origins of health and disease (DOHaD) [6]. Several animal models have been developed to study the pathophysiology of developmental programming of MetS. The current models can be classified according to their nutritional, genetic, environmental and chemical factors [3,4,5]. The DOHaD concept offers a novel approach to prevent MetS through reprogramming, a strategy that shifts therapeutic intervention from adulthood to early life [7]. A number of pharmaceutical and dietary interventions have been examined as reprogramming strategies to prevent MetS and related disorders [3,4,5,7,8,9]. Among these, great attention has been given to resveratrol due to its beneficial effects on health [10,11,12]. Here, we first review the key themes on the developmental origins of MetS. This will be followed by presenting resveratrol supplementation as a possible reprogramming strategy to counter the growing epidemic of MetS and related disorders.

2. Epidemiological and Experimental Evidence for the Developmental Origins of Metabolic Syndrome

Several epidemiological studies indicate that fetuses exposed to suboptimal conditions increase the risk of MetS and related disorders. The first key evidence for developmental origins of MetS comes from the data gathered after severe famines, such as the Dutch Hunger Winter. Offspring born following famine exposure are prone to develop different phenotypes of MetS, such as obesity, diabetes and hypertension [13,14,15]. The risks for developmental programming of MetS have been assessed in a number of cohort studies, as reviewed elsewhere [7,16]. These risk factors for MetS of developmental origins involve a range of pre-, peri- and post-natal insults. Risks reported in these cohorts include: maternal malnutrition, maternal smoking exposure, maternal obesity, gestational hypertension, short-term breastfeeding, excessive postnatal weight gain and in utero exposure to endocrine-disrupting chemicals [7,16]. Further evidence comes from studies in twins, where associations have been reported between low birth weight and different phenotypes of MetS, including type 2 diabetes, hypertension and insulin resistance [17]. By last, a systematic review of 39 papers revealed that neonates born with low birthweight and experienced a rapid catch-up growth had a 79.6% increased risk for development of cardiovascular disease, a major complication of MetS [18]. All of these observations provide a link between the poor fetal and infantile environment and the risk of developing MetS and related disorders in later life.
So far, a number of nutritional, pharmacological and genetic models have been used to examine the mechanisms underlying MetS of developmental origins [3,4,5,19]. Different early-life insults can cause similar phenotypes of MetS, suggesting that common mechanisms can be involved in the development of MetS and related disorders. Although these common pathogenic mechanisms still remain inconclusive, certain programming mechanisms have been documented, including but not limited to, impaired nitric oxide (NO) system, endothelial dysfunction, oxidative stress, activation of the renin-angiotensin system (RAS), dysregulated nutrient sensing signals, autophagy and inflammation [4,7,9,19,20,21,22].

NO deficiency is a well-known pathogenetic mechanism of endothelial dysfunction that results from diverse cardiovascular risk factors such as hyperlipidemia, diabetes mellitus, obesity and hypertension [61]. NO deficiency can be caused by decreased substrate l-arginine availability, decreased NOS expression/activity, inactivation due to oxidative stress and inhibition by ADMA (an endogenous NOS inhibitor). Among the reasons for NO-ROS imbalance, increasing attention has been given to ADMA [27]. Indeed, increased plasma ADMA levels are associated with most of the clinical conditions associated with MetS such as hypertension, hypercholesterolemia, diabetes mellitus, obesity and NAFLD [27]. As reviewed elsewhere, impaired ADMA-NO pathway plays an important role in the pathogenesis of compromised pregnancies and fetal programming [62]. Conversely, a number of reprogramming strategies have been directed at influencing the balance of ADMA and NO in a wide range of models of cardiovascular programming [7,63]. Resveratrol can activate SIRT1 to reduce ADMA and increase NO bioavailability to protect against endothelial dysfunction [64]. Our previous study highlighted that resveratrol supplementation increased renal SIRT1 protein levels and reduced plasma ADMA levels protecting the offspring against hypertension induced by post-weaning high-fat diet [52]. It would be interesting to see whether resveratrol supplementation can also ameliorate other MetS-related phenotypes via mediating ADMA-NO pathway in different models of developmental programming.

The RAS is both a target of and contributor to MetS [30]. The RAS contains two opposite axes: the angiotensin converting enzyme (ACE)-angiotensin (Ang) II-AT1R classical axis mediated primarily by Ang II and the ACE2-angiotensin-(1-7)-Mas receptor axis mediated mainly by Angiotensin-(1-7) [65]. In contrast to ACE, ACE2 appears to control the expression levels of angiotensin II type 2 receptor (AT2R) and Mas receptor inhibiting the development of hypertension [65]. It is well known that over activation of the classical RAS leads to hypertension [65]. Additionally, hyperglycemia and insulin resistance have been demonstrated to activate RAS components (e.g., renin, ACE and AT1R) in specific cell types that mediate various phenotypes of MetS [30]. Conversely, early inhibition of the classical RAS has been shown to prevent the development of hypertension [66,67,68]. In addition to hypertension, RAS inhibition has been reported as a beneficial therapeutic approach to control impaired glucose levels, insulin tolerance and dyslipidemias in patients with MetS [30]. Recent evidence suggests that resveratrol can ameliorate most of the features of MetS and the beneficial effects of resveratrol treatment are commonly associated with down-regulation of the classical RAS axis and stimulation of the alternative RAS axis [69,70]. Nevertheless, little attention has been paid to explore the influence of resveratrol on the RAS components to prevent MetS of developmental origins. So far, only one report demonstrates that resveratrol could exert its protective effects on programmed hypertension induced by maternal post-weaning high-fat diet associated with decreased plasma Ang II level and increased plasma Ang (1-7) level [52]. Further studies are required to elucidate the detailed programming mechanisms underlying the modulation of RAS by resveratrol and whether these effects are protective against other MetS-related phenotypes using various programming models.

There are other potential mechanisms related to MetS programming by which resveratrol might act: (1) by activating Nrf2, (2) by inhibiting NF-κB inflammation pathway and (3) by epigenetic regulation. Although Nrf2 activation and NF-κB inhibition have been reported to be protective in other developmental programming models [71,72,73], there is not enough data relating the reprogramming effects of resveratrol with MetS of developmental origins via regulation of Nrf2 and NF-κB. Additionally, epigenetic regulation has been considered an important mechanism underlying developmental programming [74]. Epigenetic processes, such as DNA methylation, covalent modifications of histones and non-coding RNAs, can induce changes in gene expression. Of note is that SIRT1 is a class III histone deacetylase (HDAC) family protein and resveratrol is an HDAC inhibitor [75]. HDACs have been reported to epigenetically regulate several genes belonging to the RAS [76]. Thus, it is speculated that resveratrol has epigenetic effects on RAS genes via HDAC dependent mechanisms.

This work was supported by the Grants CMRPG8G0672, CMRPG8F0023 and CMRPG8H0081 from Chang Gung Memorial Hospital, Kaohsiung, Taiwan. 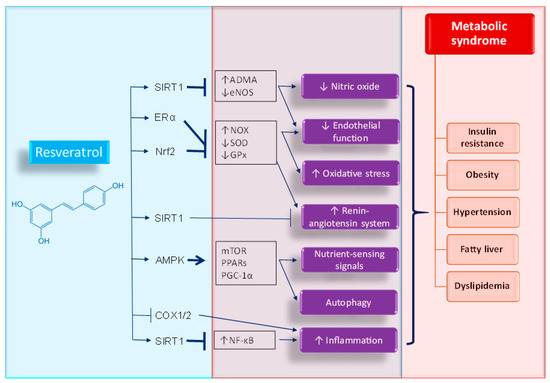