Effects of Iron Overload and Oxidative Damage on the Musculoskeletal System in the Space Environment: Data from Spaceflights and Ground-Based Simulation Models
Previous Article in Journal

Impact of Spaceflight and Artificial Gravity on the Mouse Retina: Biochemical and Proteomic Analysis

Astronauts are reported to have experienced some impairment in visual acuity during their mission on the International Space Station (ISS) and after they returned to Earth. There is emerging evidence that changes in vision may involve alterations in ocular structure and function. To investigate possible mechanisms, changes in protein expression profiles and oxidative stress-associated apoptosis were examined in mouse ocular tissue after spaceflight. Nine-week-old male C57BL/6 mice (n = 12) were launched from the Kennedy Space Center on a SpaceX rocket to the ISS for a 35-day mission. The animals were housed in the mouse Habitat Cage Unit (HCU) in the Japan Aerospace Exploration Agency (JAXA) “Kibo” facility on the ISS. The flight mice lived either under an ambient microgravity condition (µg) or in a centrifugal habitat unit that produced 1 g artificial gravity (µg + 1 g). Habitat control (HC) and vivarium control mice lived on Earth in HCUs or normal vivarium cages, respectively. Quantitative assessment of ocular tissue demonstrated that the µg group induced significant apoptosis in the retina vascular endothelial cells compared to all other groups (p < 0.05) that was 64% greater than that in the HC group. Proteomic analysis showed that many key pathways responsible for cell death, cell repair, inflammation, and metabolic stress were significantly altered in µg mice compared to HC animals. Additionally, there were more significant changes in regulated protein expression in the µg group relative to that in the µg + 1 g group. These data provide evidence that spaceflight induces retinal apoptosis of vascular endothelial cells and changes in retinal protein expression related to cellular structure, immune response and metabolic function, and that artificial gravity (AG) provides some protection against these changes. These retinal cellular responses may affect blood–retinal barrier (BRB) integrity, visual acuity, and impact the potential risk of developing late retinal degeneration. View Full-Text
Keywords: spaceflight; ocular tissue; microgravity; artificial gravity; apoptosis; proteomics; oxidative stress spaceflight; ocular tissue; microgravity; artificial gravity; apoptosis; proteomics; oxidative stress
►▼ Show Figures 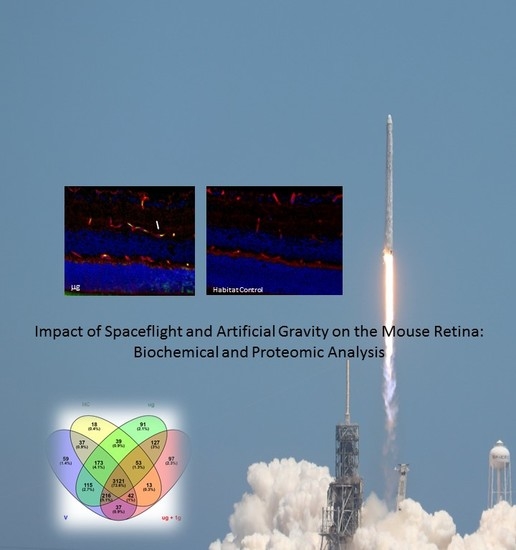