The Role of Curcumin in Prevention and Management of Metastatic Disease

Carlotta A. Glackin
2 and

Epithelial ovarian cancer (EOC) is the most fatal gynecologic cancer among women in the United States [1], with dismal outcomes for advanced stage and recurrent disease. Novel therapies are desperately needed, and this has led to investigation of the JAK2/STAT3 pathways, which appear to be play an important role in carcinogenesis of numerous cancers [2,3,4,5]. This pathway represents an attractive therapeutic target given its tight regulatory steps at multiple cellular levels, thus offering ample targeting points [6,7]. A number of existing drugs and natural compounds inhibit or modulate the JAK/STAT3 pathways, including resveratrol [8,9] and ruxolitinib, an FDA approved drug for the treatment of myelofibrosis (MF), post-polycythemia vera myelofibrosis (PPV-MF), and post-essential thrombocythemia myelofibrosis [10,11]. Ruxolitinib additionally is currently tested in newly diagnosed ovarian cancer in upfront treatment in a clinical trial led by the Gynecologic Oncology Group. Resveratrol on the other hand, has been widely researched, and despite promising preclinical data, has demonstrated disappointing clinical efficacy in patients due to its poor bioavailability [12,13,14]. In contrast, pterostilbene (PTE), a natural, dimethylated resveratrol analog with higher bioavailability, has recently become of increasing interest [15,16,17,18]. Its strong antitumor activity, low toxicity, and commercial availability as well as its low cost, has rendered PTE as an attractive agent for adjuvant therapy in malignancies [19,20,21,22,23,24,25,26,27]. As healthcare costs rise, interest in natural supplements with strong anti-tumor properties has increased, and pterostilbene represents an appealing novel therapeutic agent in chronic cancers such as ovarian cancer, where recurrent disease is common, and long-term goals include maintenance of quality of life along with longevity. We thus evaluated the mechanistic role of pterostilbene in ovarian cancer cells, to test its effectiveness as single agent or adjuvant agent for epithelial ovarian cancer (EOC). We explored its potential role in JAK/STAT signaling, given previous reports in other cancers, including osteosarcoma, where pterostilbene reduced tumor cell adhesion, migration and mitochondrial membrane potential (MMP), and directly inhibited the phosphorylation of JAK2 at Tyr 1007 and the downstream activation of STAT3 [28].

The reduced cell survival by pterostilbene could also be due to the induction of apoptosis. To study this possibility, cells were treated with various concentrations of pterostilbene for 48 h. The number of apoptotic cells was then determined by annexin V staining. As shown in Figure 3, pterostilbene induced cell apoptosis in a dose dependent manner in both OVCAR-8 and Caov-3 cells. After incubation with 50, 75, 100, 150 and 300 μm pterostilbene, apoptotic OVCAR-8 cells increased from 11.5 to 15.1, 14.6, 19.1, 77.9 and 99.8, respectively and apoptotic Caov-3 cells increased from 26.5 to 27.1, 27.3, 36.5, 70.2 and 99.7, respectively. Consistent with the annexin V staining results, more cleaved poly-ADP ribose polymerase (PARP) were generated in both OVCAR-8 and Caov-3 cells treated with pterostilbene for 48 h. PARP is 116kDA protein mainly involved in DNA repair and cell survival. The cleavage of this protein by caspases during apoptosis is considered to be a marker for apoptosis. These results indicate that pterostilbene could effectively inhibit cell viability of human ovarian cancer cells by promoting apoptosis.

Cells (5000 per well) were plated in 96-well plate in 100 μL growth medium. Cells were treated with DMSO or drugs the next day at the indicated concentrations and incubated for an additional 48 h. Viable cells were determined by the MTT assay (Promega, Madison, WI, USA) according to manufacturer’s instruction. Briefly, after treating the cells for 48 h, the media were removed and 110 μL of 3-(4,5-dimethyl-thiazol-2-yl)-2,5-diphenyltetrazolium bromide (MTT) dye (10 μL of 5 mg/mL in PBS with 100 μL of corresponding media) were added to each well and incubated for 4 h. The formazan crystals formed were dissolved in 110 μL dimethyl sulfoxide (DMSO) after removing of the media. Absorbance at 570 nm was determined for each well using SPECTRAmax PLUS384 Microplate Spectrophotometer. The IC50 was determined using the Calcusyn software (Biosoft, Ferguson, MO, USA).

Cells were treated with pterostilbene at various concentrations for 24 h. All cells were harvested, washed with PBS, fixed with cold ethanol (70%), and stained with propidium iodide (10 μg/mL) for DNA content. The staining intensity was analyzed by fluorescence-activated cell sorting (FACS) [40].

Cell migration was assayed using 24 mm diameter chambers with 8 μm pore filters (BD BioCoat 24-well plate 8.0 micron, BS Biosciences, Franklin Lakes, NJ, USA). Cells were grown in serum-free medium overnight. Cells were trypsinized and resuspended in serum-free medium, and then 200 μL of cell suspension (7.0 × 104 cells) plus pterostilbene (25–100 μm) was added to the upper chambers. The lower chambers were filled with 800 μL of 10% FBS medium and incubated for 2 days for OVCAR-8 cells and Caov-3 cells. The filters were then fixed with 4% PFA for 10 min, washed with PBS 2x and stained with 0.2% crystal violet for 10 min. The upper surfaces of the filters were wiped with Kimwipes® to remove non-migrated cells. The migrated cells were counted using Image-Pro program (Media, Cybernetics, Warrendale, PA, USA).

Statistical analysis of synergy was used to evaluate the effect of combined cisplatin/PTE drug treatment. A combination index (CI) for synergy was determined by comparing the anti-proliferative effect of cisplatin or pterostilbene with that of the combination of both drug. This commonly used method was first described by Chou and Talalay [41]. Drug interactions were quantified with the CompuSyn for Windows computer program (MIT, Cambridge, MA, USA). CI values were calculated for the effective doses ED50, ED75 and ED90. A CI < 1 indicates synergy, CI > 1 indicates antagonistic interactions, and a CI value = 1 indicates additive effects [41].

Data are presented as mean ± S.D. Student’s t-test was used to compare the means of two groups. All the experiments were repeated 3 times or more. p < 0.05 was considered statistically significant.

We thank Lucy Brown and the Analytical Cytometry Core for their technical assistance. 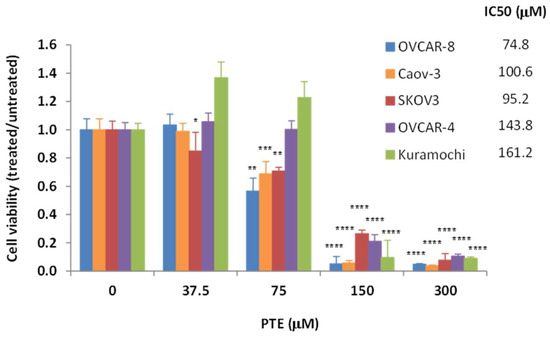 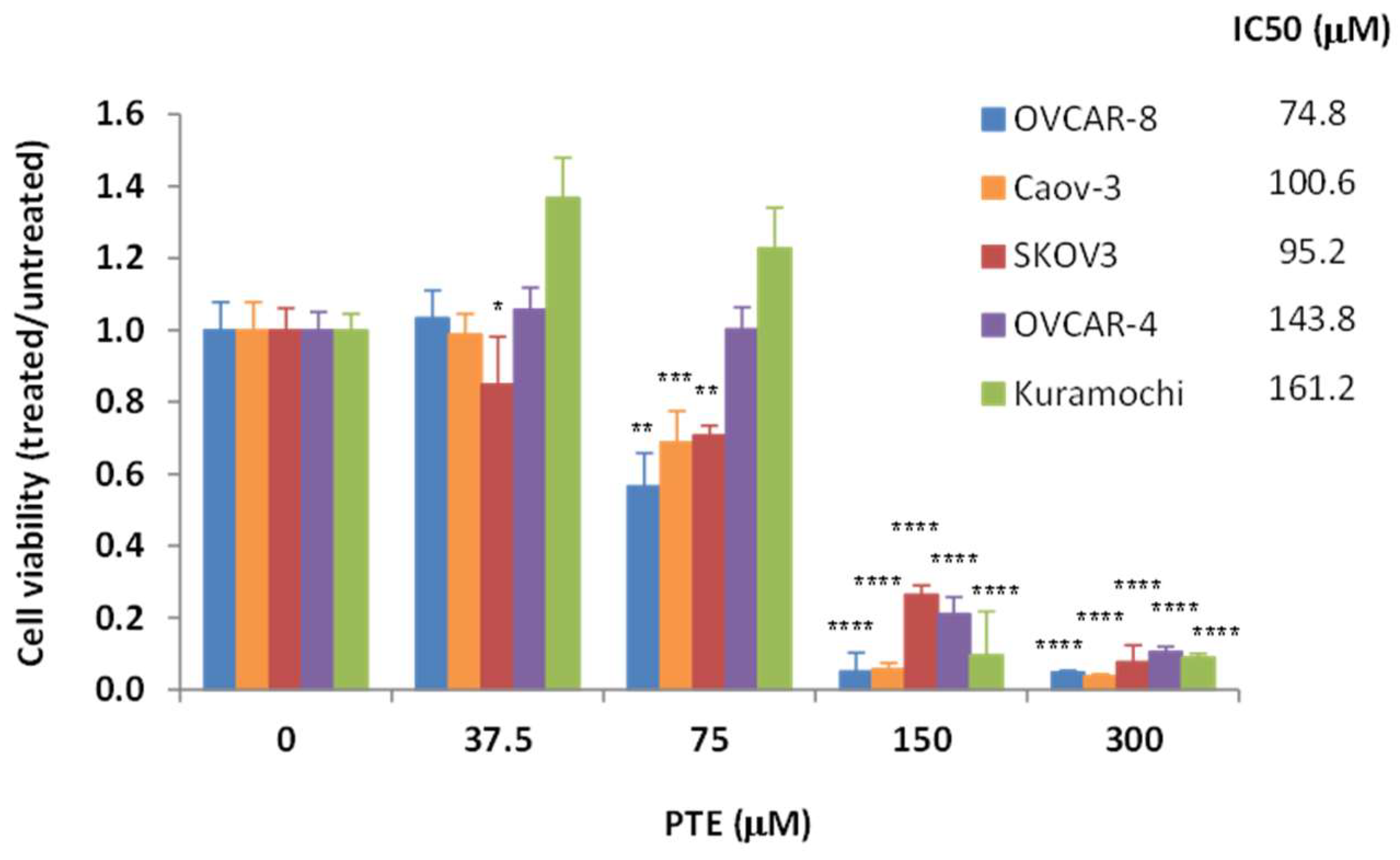 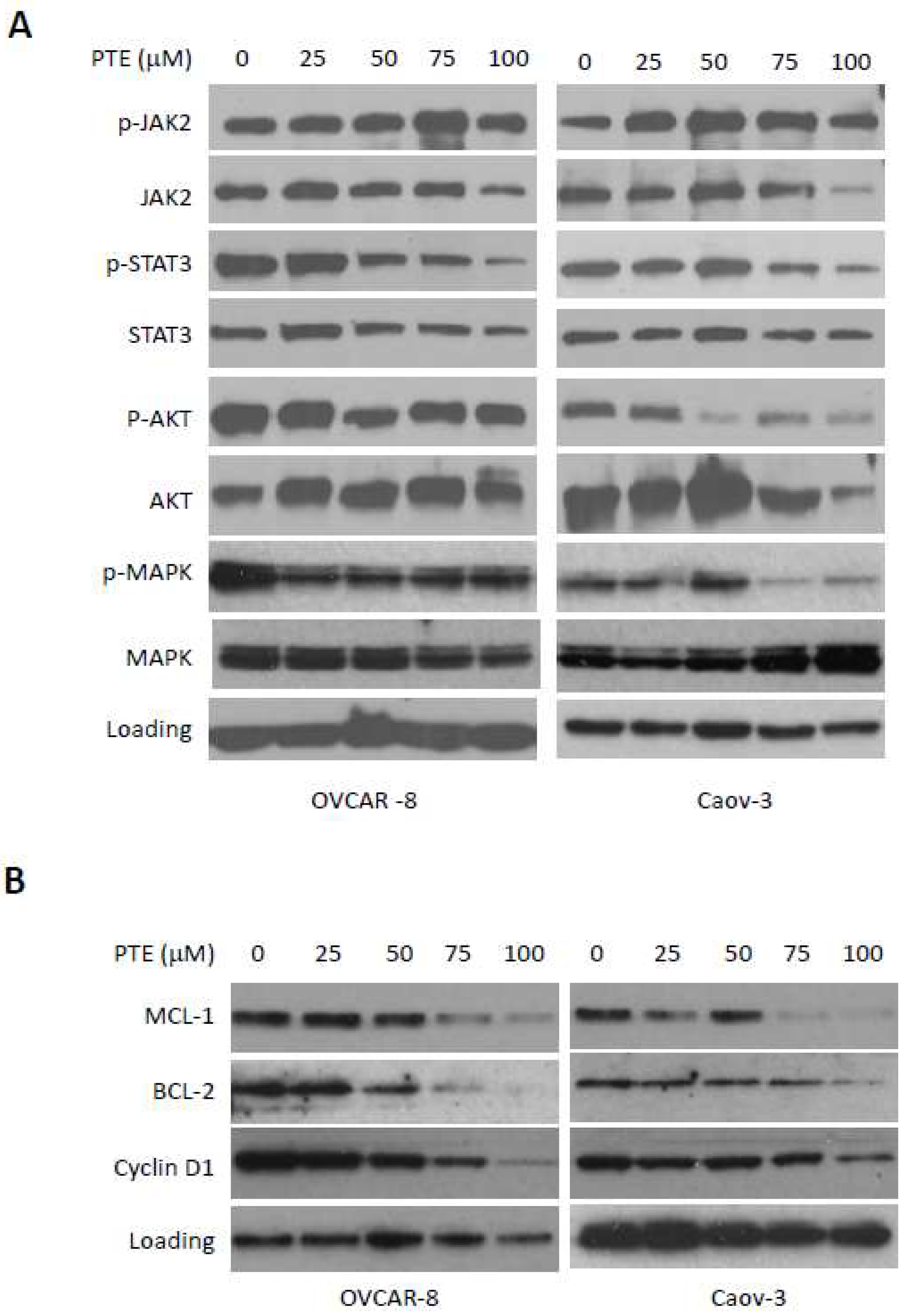