A Child with a c.6923_6928dup (p.Arg2308_Met2309dup) SPTAN1 Mutation Associated with a Severe Early Infantile Epileptic Encephalopathy

Early infantile epileptic encephalopathies (EIEEs) are a group of neurological disorders characterized by early-onset refractory seizures, severe electroencephalographic abnormalities, and developmental delay or intellectual disability. Recently, genetic studies have indicated that a significant portion of previously cryptogenic EIEEs are single-gene disorders. SPTAN1 is among the genes whose mutations are associated with EIEE development (OMIM# 613477). Here, a case of the c.6923_6928dup (p.Arg2308_Met2309dup) SPTAN1 mutation associated with a severe EIEE is reported. This case shows that mutations in the α20 repeat in the C-terminal of αII spectrin can be associated with EIEE. Duplication seems essential to cause EIEE. This causation is not demonstrated for amino acid deletions in the same spectrin residues. Reportedly, children with p.(Asp2303_Leu2305del) and p.(Gln2304_Gly2306del) deletions have childhood-onset epilepsy and no or marginal magnetic resonance imaging abnormalities, suggesting that not only the location but also the type of mutation plays a role in conditioning nervous system damage. Further studies are needed for a better understanding of the phenotype/genotype correlation in SPTAN1-related encephalopathies. View Full-Text
Keywords: early infantile epileptic encephalopathy; nervous system damage; SPTAN1 early infantile epileptic encephalopathy; nervous system damage; SPTAN1
►▼ Show Figures 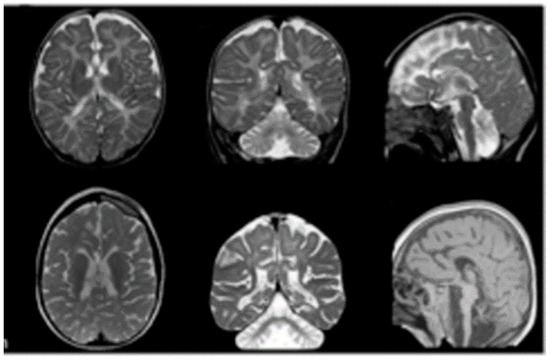