Sepsis: Precision-Based Medicine for Pregnancy and the Puerperium
Previous Article in Journal

Nucleotide metabolism homeostasis is important for the balance of cell proliferation, DNA replication, and genome stability [1]. Genomic instability facilitates tumor initiation and progression. However, the roles of nucleotide degrading enzymes in tumorigenesis are not fully understood. Loss-of-function mutations in the nucleotide degrading enzymes sterile alpha motif (SAM) domain and HD domain-containing protein 1 (SAMHD1), Three prime repair exonuclease 1 (TREX1), and ribonuclease H2 subunits A, B, and C (RNASEH2A, RNASEH2B, RNASEH2C) in human germline mainly result in a hyper-inflammatory Aicardi–Goutières syndrome (AGS), and in the development of malignancy in AGS patient is rare [2,3,4]. Our previous study on a Taiwanese colon cancer cohort showed that, in contrast to the downregulation of TREX1, SAMHD1, and RNASEH2C, RNASEH2A expression was found to be higher in tumor tissues when compared to paired normal parts [5]. Interestingly, RNASEH2A has also been reported to be upregulated in a variety of cancers, including breast, bladder, brain, prostate, head and neck cancers, seminomas, and leukemia [6].
RNASEH2A is the main catalytic unit of ribonuclease H2 (RNase H2), which degrades the ribonucleotide that is mis-incorporated into the DNA–DNA complex and cleaves the lagging-strand Okazaki fragment RNA primers from the DNA:RNA duplex during DNA replication [7]. Recently, RNASEH2A was found to have functions other than that of nucleotide degrading enzyme. For example, it was found that it could promote proliferation in sarcoma, breast cancer, and glioma cell lines, suggesting that it plays a role in cancer progression [6]. In prostate cancer, a positive correlation between RNASEH2A expression and cancer aggressiveness has been reported [8]. However, we did not detect an association between high RNASEH2A levels and colon cancer prognosis in a previous Taiwanese cohort [5]. The prognostic value of RNASEH2A on patient survival in other cancer types also remains unclear. Furthermore, regulatory pathways that interact with RNASEH2A to determine the growth of tumor cells may exist. It has been reported that certain genes have synthetic dosage lethality (SDL) interactions with genes that are frequently overexpressed in tumors and that inhibition of the SDL partners can decrease cancer proliferation [9]. In the present study, we comprehensively analyzed pan-cancer gene expression profiles that were correlated with RNASEH2A upregulation and we combined stratified survival analyses to identify potential regulatory genes which, together with RNASEH2A, provide great prognostic value for predicting the overall survival rate of cancer patients.

We first screened the messenger RNA (mRNA) expression of the nucleotide degrading enzyme genes TREX1, SAMHD1, RNASEH2A, RNASEH2B, and RNASEH2C in 14 cancer types using TCGA RNAseq data. Upregulation of RNASEH2A in cancerous tissues compared with normal tissues was observed across cancer types, except for chromophobe kidney cancer (KICH) (Figure 1A). However, Kaplan–Meier survival analyses of these cancers using the cBioPortal software showed that higher RNASEH2A expression was associated with a poor prognosis only in renal carcinomas, Figure 1B.

To study the interactions among RNASEH2A, CDK1, and CD151 and their impact on tumor proliferation, we performed si-RNA knockdown studies on three ccRCC cell lines (786O, A704, KMRC3, all with VHL mutation) and one kidney urothelial carcinoma cell line (BFTC909, without VHL mutation). As shown in Figure 3A, CDK1 knockdown resulted in the upregulation of RNASEH2A and CD151 in all cell lines, however it did not significantly impair tumor proliferation (except for a mild effect on A704). Interestingly, in BFTC909, CDK1 could not be knocked down after a 96-hour si-CDK1 transfection, and the tumor survival rate even increased. Furthermore, RNASEH2A knockdown resulted in CD151 upregulation and decreased proliferation in all ccRCC cell lines. Elevated CDK1 expression was observed in KMRC3 and BFTC909 cell lines 96 h after RNASEH2A knockdown; however, in contrast to KMRC3, CD151 upregulation was not detected in BFTC909, and its cell proliferation was enhanced (Figure 3B). As for CD151 knockdown experiments, the upregulation of RNASEH2A was observed in all kidney cancer cell lines and was associated with impaired tumor proliferation (Figure 3C). Cell viability assays were performed in ccRCC cell line 786O after transfection with si-CDK1, si-RNASEH2A, and si-CD151, which showed comparable results to the 3-(4,5-dimethylthiazol-2-yl)-2,5-diphenyltetrazolium bromide (MTT) assays (Figure 4).

2.4. Analyses of the Prognostic Values of CD151-Related Genes in RCC

Next, we performed CD151 interactome analysis and cluster analysis to identify downstream genes in the CD151-related pathway (Figure 5A,B). The expression of ITGB1, ITGB4, and PLEC was found to be closely clustered with CD151 expression, and their upregulation was associated with poor overall survival in KIRP or KIRC (Figure 5B,C).

2.5. Establishment of a Prognostication Scoring System for Survival Prediction in RCC

The above analyses highlight that, although RNASEH2A upregulation alone is not a universal cancer prognosis marker, it might form an alternative pathway with CD151 to enhance tumor growth in CDK1-low renal cell carcinomas. A prognostication scoring system based on the expression levels of RNASEH2A-, CDK1-, and CD151-related genes could effectively predict the survival rate of RCC cancer patients (with a mean difference of four years in ccRCC).
CDK1 promotes cell proliferation and survival and it is frequently overexpressed in cancer specimens [11]. Increased CDK1 activity reportedly predicts RCC recurrence, and an association has been found between CDK1 overexpression or hyperactivity and worse prognosis in ovarian, colorectal, and breast cancers [11,12,13,14]. However, the results from clinical trials for CDK inhibitors were mostly disappointing [15]. Similarly, in our study, CDK1 knockdown in RCC cell lines did not have a pronounced effect on tumor growth. Interestingly, increased RNASEH2A and CD151 expression was observed in si-CDK1-treated ccRCC cell lines and were was found in RCC patients with a low tumor CDK1 level and bad clinical outcomes. This suggests that RNASEH2A and CD151 have compensatory roles in promoting cell cycle progression and tumor growth. In contrast to CDK1 knockdown, transfection of RCC cell lines with either si-RNASEH2A or si-CD151 resulted in impaired tumor proliferation. Upregulation of CD151 and RNASEH2A was noted 48 h after si-RNASEH2A and si-CD151 knockdown, respectively, in all kidney cancer cell lines. Since synthetic dosage lethality (SDL) is defined by a combination of gene A overexpression and gene B underexpression and leads to cell death, our results suggest that RNASEH2A and CD151 may have SDL interactions. Therefore, CD151 is a potential drug target in RNASEH2A highly expressing tumors. Validation of the SDL relationships between RNASEH2A and CD151 in other cancer types is needed.
CD151 is known to form complexes with integrins and other transmembrane proteins and could be involved in cancer invasion and metastasis [16]. High CD151 expression alone has been reported to predict cancer progression in ccRCC patients [17]. Our study identified that the expression of CD151 downstream genes ITGB1, ITGB4, and PLEC may have additional prognostic values in kidney cancers. Consistent with this finding, simultaneous blocking of cdk1–cyclin B and integrin subtypes α5, α6, β4 using the drug sulforaphane was found to inhibit everolimus-resistant kidney cancer cell growth [18]. Furthermore, according to the potential SDL relationships between CD151 and RNASEH2A identified by this study, CD151-high RCCs could be treated with RNASEH2A inhibitors.
RCC is among the 15 most common tumors around the world, and ccRCC is the most prevalent subtype [19]. The mortality rate of RCC is about 20–40%, partly due to metastasis at initial presentation, heterogeneity of cancer histology, as well as treatment resistance. Currently, the main prognostication system for metastatic RCC is the Memorial Sloan-Kettering Cancer Center (MSKCC) prognostic category, which is based on clinical and laboratory parameters [20]. Factors concerning tumor biology and the heterogeneous tumor genome and transcriptome are not included. Recently, mRNA and protein expression information was reported to have prognostic values in RCC [21,22]. Our study is the first to comprehensively analyze the genetic heterogeneity and potential SDL interactions that underlie the various clinical outcomes in RNASEH2A-high tumors. The derived prognostication scoring system that uses coefficients calculated from Cox regression analyses of the TCGA KIRC data is able to predict not only the prognosis of ccRCC, but also the survival rate of patients with the pRCC subtype. Our prediction system needs to be further validated in more kidney cancer cohorts.

The kidney clear cell carcinoma cell lines 786O, A704, KMRC3, and kidney transitional cell carcinoma cell line BFTC909 were transfected with 10 nM siRNA for RNASEH2A, CD151, CDK1, or a negative control (purchased from MD Bio Inc., Taipei, Taiwan) using Lipofectamine RNAiMAX transfection reagent (Thermo Fisher Scientific-Invitrogen, Waltham, MA, USA), according to the manufacturer’s instructions. After 24 h, 48 h, 72 h, and 96 h of transfection, cell viability and proliferation were evaluated by MTT [3-(4,5-dimethylthiazol-2-yl)-2,5-diphenyltetrazolium bromide] assays. The reduced intracellular purple formazan crystals were dissolved by adding DMSO, and the absorbance was analyzed at 570 nm in a microtiter plate reader. The 786O cell line was also seeded on 24-well plates at 104 cells/well, and cell culture images under a 100× light microscope were taken at 48 h and 96 h post-transfection. Cell viability was evaluated by counting the ratio of dead (rounded cells) versus viable cells (normal shape, attached to the plate).

The RNA expression data were log2 transformed and normalized to z score (sample value minus data mean and then divided by data standard deviation). Kaplan–Meier analyses for the overall survival (OS) in patients with RNASEH2A overexpression were performed using the cBioPortal software (http://www.cbioportal.org/). Kaplan–Meier and Cox proportional hazards regression analyses for OS in patients with differential gene expression patterns were calculated via the MedCalc software version 14. The log-rank test p < 0.05 was used to determine the significance of the survival analysis.
For the establishment of the prognostication scoring system, the beta value of each gene upregulation (z score ≥ 0.5) was derived from the Cox regression analysis and was used as the weight to multiply the gene expression value (z score). The score was calculated on the ∑β × gene expression z score. Cutoff Finder version 2.1 [24] was used to determine the optimal cutoff scores and to plot the Kaplan–Meier survival curves, as well as the receiver operating characteristic (ROC) curves based on the cutoff values. Multivariate Cox regression analyses on prediction scores and significant clinical parameters (defined by univariate analyses) in RCC cohorts were performed via the SAS software v.9.3 (SAS Institute, Inc., Cary, NC, USA) to determine whether our score could predict RCC patient survival independently.
For categorical data, the Fisher’s exact test was used to evaluate the statistical significance. The Mann–Whitney U test was performed to calculate the differences in cell MTT proliferation assays and in cell viability assays. Gene expression correlation studies were analyzed by Pearson’s tests. Gene expression cluster analysis was performed via MORPHEUS software (https://software.broadinstitute.org/morpheus).

This project was supported by the Ministry of Science and Technology (MOST), Taiwan, grant 106-2314-B-039-047-MY3. We thank Shun-Jen Chang for statistical consulting. 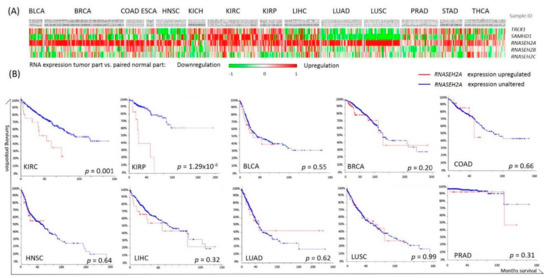 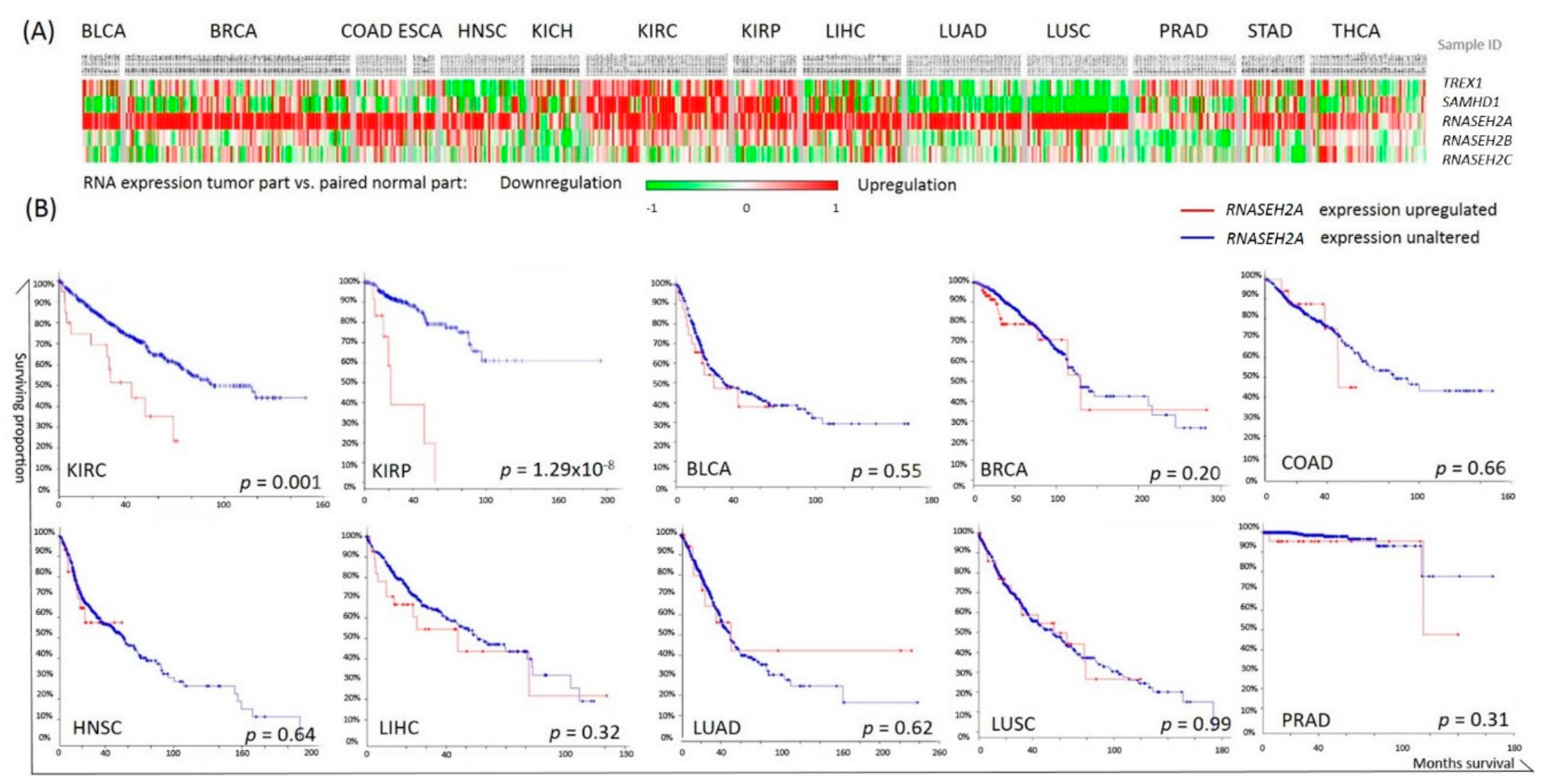 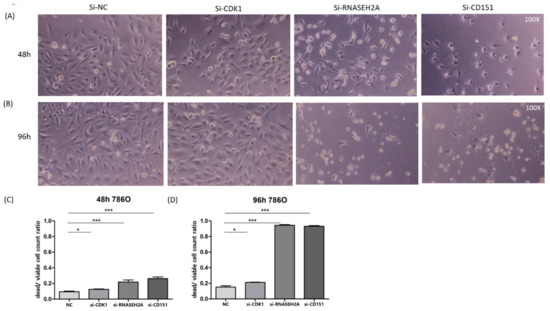 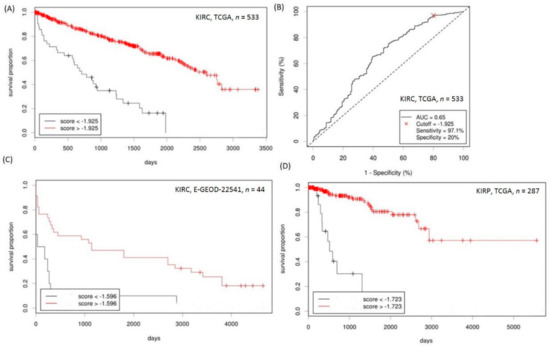 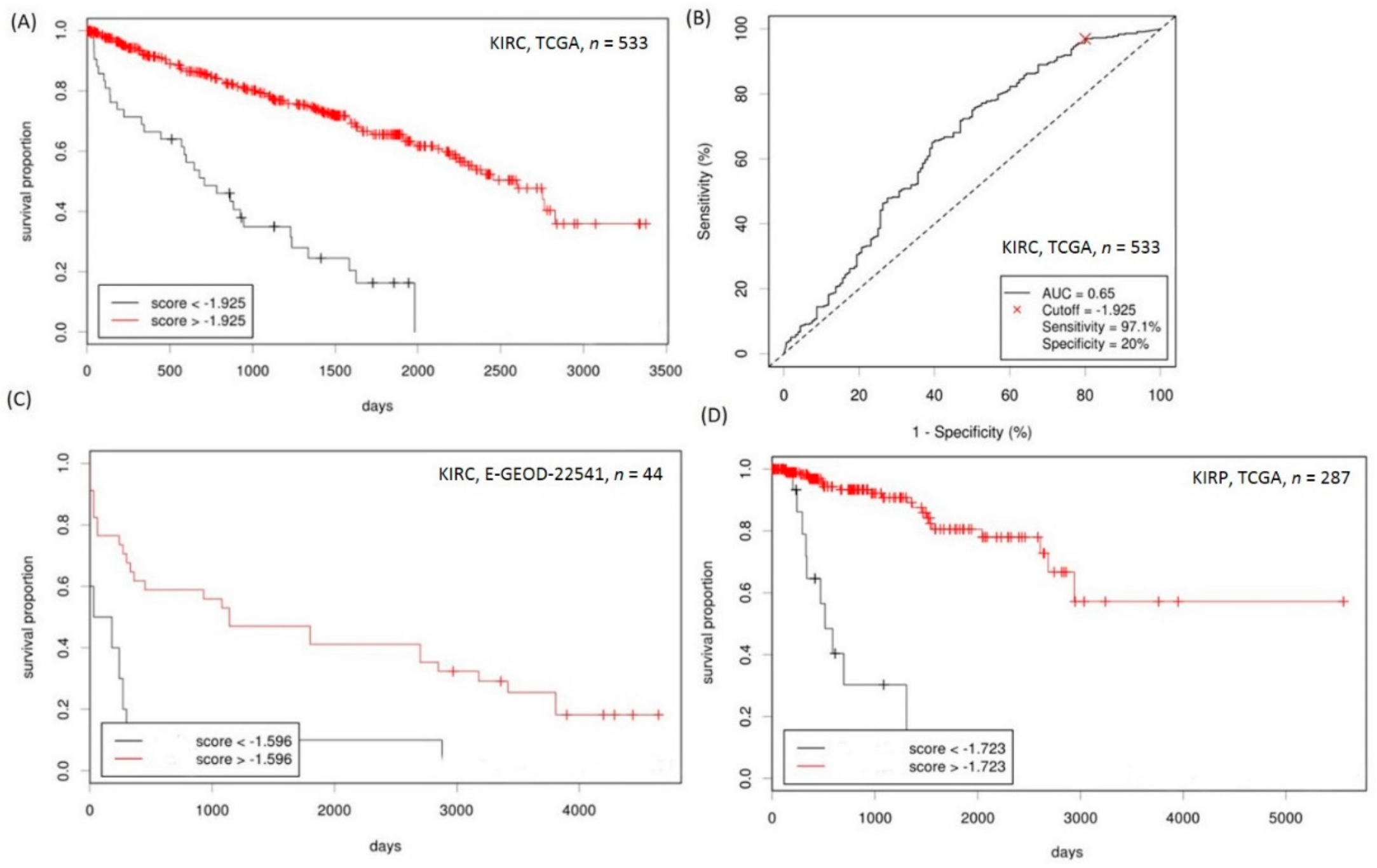