Therapeutics for Inflammatory-Related Diseases Based on Plasmon-Activated Water: A Review
Next Article in Special Issue

Short oligonucleotides with cyclopalladated benzylamine moieties at their 5′-termini have been prepared to test the possibility of conferring palladacyclic anticancer agents sequence-selectivity by conjugation with a guiding oligonucleotide. Hybridization of these oligonucleotides with natural counterparts was studied by UV and CD (circular dichroism) melting experiments in the absence and presence of a competing ligand (2-mercaptoethanol). Cyclopalladated benzylamine proved to be strongly stabilizing relative to unmetalated benzylamine and modestly stabilizing relative to an extra A•T base pair. The stabilization was largely abolished in the presence of 2-mercaptoethanol, suggesting direct coordination of Pd(II) to a nucleobase of the complementary strand. In all cases, fidelity of Watson-Crick base pairing between the two strands was retained. Hybridization of the cyclopalladated oligonucleotides was characterized by relatively large negative enthalpy and entropy, consistent with stabilizing Pd(II) coordination partially offset by the entropic penalty of imposing conformational constraints on the flexible diethylene glycol linker between the oligonucleotide and the palladacyclic moiety. View Full-Text
Keywords: DNA; oligonucleotide; hybridization; organometallic; palladacycle; palladium DNA; oligonucleotide; hybridization; organometallic; palladacycle; palladium
►▼ Show Figures 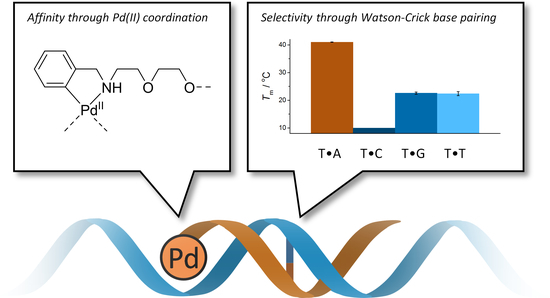