Expression of AhDREB1, an AP2/ERF Transcription Factor Gene from Peanut, Is Affected by Histone Acetylation and Increases Abscisic Acid Sensitivity and Tolerance to Osmotic Stress in Arabidopsis
Next Article in Special Issue

Why Two? On the Role of (A-)Symmetry in Negative Supercoiling of DNA by Gyrase
Previous Article in Journal

2.3. Acetylation of Topoisomerase I Reduced Binding Affinity of the DNA Substrate

2.4. Identification of Lysines in Topoisomerase I Modified by Nonenzymatic Acetylation

Collision-induced dissociation quadrupole time-of-flight tandem mass spectrometry (CID, Q-TOF-MS) analysis of the tryptic digest of acetylated topoisomerase I detected 60 unique tryptic peptides (Table S1) for a sequence coverage of 58.6%, of which 4 peptides were determined to contain acetylated lysines using tandem MS analysis (ALVIVESPAK(Ac)AK, SSVGHIRDLPTSGSAAK(Ac)K, K(Ac)YLPESPNQYASK, and FSEASLVKELEK(Ac)R) at positions Lys13, Lys45, Lys346, and Lys488 (Figure 4). The detected acetylated peptides were assigned MaxQuant scores >30 (MaxQuant evidence can be found in Table S2). In addition, the integrated areas of the extracted ion chromatograms (EIC) suggest that the abundance for the peptides containing positions Lys45 and Lys346 are lower than the abundance of the peptides containing positions Lys13 and Lys488 (Figure 5). Thus, the scores of assignment for positions 45 and 346 are reported at 31 and 33, respectively, whereas for positions Lys13 and Lys488, the scores of assignment are 75 and 68, respectively. In terms of the probability of acetylation site assignment, positions Lys13, Lys45, and Lys346 have probabilities values of 1, whereas position Lys488 in the peptide FSEASLVKELEKR has a probability value of 0.9, while the other potential acetylation site at Lys484 has a probability value of 0.09 within the same observed peptide. Thus, MaxQuant analysis locates the acetylation at position Lys488. For experimental control purposes, bottom-up proteomic analysis of the nonacetylated topoisomerase I detected 34 unique tryptic peptides for a sequence coverage of 43.7%, without detecting any acetylated peptide.

To assay the relaxation activity of topoisomerase I, each protein was serially diluted as indicated and incubated with 180 ng of supercoiled pBAD/Thio plasmid DNA in 20 μL reaction (10 mM Tris-HCl, pH 8.0, 50 mM NaCl, 0.1 mg/mL gelatin, 6 mM MgCl2). After incubation at 37 °C for 30 min, the reaction was stopped by addition of 4 μL stop solution (50 mM Ethylenediaminetetraacetic acid, 50% glycerol, 0.5% (v/v) bromophenol blue). The plasmid DNA was electrophoresed in 1% agarose gel with TAE buffer (40 mM Tris-acetate, pH 8.3, 2 mM EDTA) and visualized with ultraviolet light.

A 59-base oligonucleotide DNA substrate [37] (5′-GCCCTGAAAGATTATGCAATGCGCT↓TTGGGCAAACCAAGAGAGCATAATCTTTCAGGGC-3′, (↓ representing the cleavage site) was labeled with 32P at the 5′-end with T4 polynucleotide kinase and used in the cleavage assays. For the cleavage assay, 32P-labeled oligonucleotide substrate was added to nonacetylated or acetylated topoisomerase I in 5 µL acetylation reaction buffer along with 10 mM EDTA to favor DNA cleavage over religation. Following incubation at 37 °C for 30 min, the reactions were stopped by addition of 5 µL of stop solution (79% formamide, 0.2M NaOH, 0.04% bromophenol blue). The samples were heated at 95 °C for 5 min and electrophoresed in 15% sequencing gel with 1 X TBE buffer (90 mM Tris-borate, pH 8.0, 2 mM EDTA), followed by analysis with the Pharos FX Plus Phosphorimager (Bio-Rad (Hercules, CA, USA)). The fraction of cleaved oligonucleotide product was quantified by Quantity One 1-D analysis.

Gel shift assay was used to measure DNA binding. The 32P-labeled 59-base oligonucleotide DNA substrate was incubated with nonacetylated and acetylated E. coli topoisomerase I in 10 µL reaction (150 mM Tris-HCl, pH 8.0, 1 mg/mL BSA, 10% glycerol, 5 mM MgCl2, 10 mM EDTA). After incubation at 37 °C for 5 min, the DNA–enzyme complex was separated from the unbound DNA by electrophoresis in 6% native polyacrylamide gel with 0.5× TBE buffer (45 mM Tris-borate, pH 8.0, 1 mM EDTA). The fraction of oligonucleotide bound to the enzyme was determined by analysis with the Pharos FX Plus Phosphorimager.

Fifteen micrograms of acetylated topoisomerase I and 15 μg of nonacetylated topoisomerase I were electrophoresed in 10% SDS-PAGE gel and visualized by Coomassie blue staining. The sample bands were excised, divided into two parts, and placed in a clean plastic Eppendorf tube prior to in-gel digestion with trypsin. In-gel trypsin digestion was conducted utilizing the Thermo Scientific (Rockford, IL, USA) digestion kit and protocol number 89871. In summary, each gel band was first destained in ammonium bicarbonate in acetonitrile/water. Subsequently, the gel pieces were reduced utilizing a Tris[2-carboxyethyl]phosphine (TCEP) reducing buffer and alkylated with iodoacetamide in water. Thereafter, the gel pieces were washed with an ammonium bicarbonate destaining solution twice. Digestion was then conducted by first shrinking the gel pieces with 50 µL of acetonitrile with an incubation time of 15 min at room temperature. The acetonitrile was then removed and the gel pieces were allowed to airdry for 10 min. The gel pieces were then covered with 10 µL of the trypsin solution and incubated at room temperature for 15 min. Finally, 25 µL of the digestion buffer (2 mg/mL ammonium bicarbonate, approx. 25.3 mM) were added to the gel pieces and the samples were incubated for 14 h at 30 °C in a water bath. The supernatant was then separated from the gel pieces and placed in a clean Eppendorf tube. Immediately after, an additional extraction of peptides was performed by adding 10 µL of 1% formic acid to the gel band and allowed to incubate for an additional 10 min. The supernatant was combined with the gel peptide extract and used for mass spectrometry analysis.

Proteomics analysis of the trypsin digested nonacetylated and acetylated topoisomerase I enzymes was conducted using liquid chromatography coupled to tandem mass spectrometry. A Bruker Impact HD ESI-QTOF-MS (Billerica, MA, USA) instrument operated coupled to a Prominence LC-20CE Ultra-Fast Liquid Chromatograph (Shimadzu, Kyoto, Japan) was used for all the analyses. A Waters XBridge Peptide BEH C18 (300 Å, 5 μm, 4.6 × 250 mm) column protected by a 4.6 × 20 mm guard column was used. Peptides were eluted by a 46 min binary gradient with a mobile phase consisting of 0.1% formic acid in water (mobile phase A) and 0.1% formic acid in acetonitrile (mobile phase B) run according to the following timetable: hold 10% B for 5 min diverting to waste; hold 10% B for 2.6 min infusing to the mass spectrometer; ramp to 25% B in 10.6 min; ramp to 30% B in 2.8 min; ramp to 35% B in 6.3 min; ramp to 100% B for 1.7 min; hold 100% B for 4 min then divert to waste; hold 100% B for 2 min; return to 10% B in 5 min; hold 10% B for 6 min for re-equilibration. Flow rate was constant at 0.4 mL/min and oven temperature kept constant at 50 °C. Tandem mass spectrometry data was analyzed utilizing the MaxQuant proteomics analysis suite applying a false discovery rate (FDR) of 1% and a minimum score for modified peptides of 30, and MS/MS searches were conducted applying a 0.5 Da tolerance. For the digest search parameters, trypsin/p was utilized as the digest enzyme allowing up to six missed cleavages. For variable modifications, oxidation of methionine (M) and acetylation of the protein N-term and lysine (K) residues were applied as search parameters, whereas carbamidomethylation of cysteine (C) was applied as the sole fixed modification. In addition, the integrated areas for the extracted ion chromatograms were calculated utilizing Bruker Daltonics Data Analysis version 5.1 with a tolerance of ±0.005 Da for the following masses: 634.3846, 783.8936, 789.4303, and 926.9974 for the ions containing Lys13, Lys346, Lys488, and Lys45, respectively. Finally, the area integration was conducted with an intensity threshold of 1000 and a sensitivity of 99% for all aforementioned masses.

This work was supported by the National Institutes of Health under grant R01 GM054226 (to Y.-C.T.-D.) and the National Science Foundation Division of Chemistry, under CAREER award CHE-1654274, with co-funding from the Division of Molecular and Cellular Biosciences (to F.F.-L.). 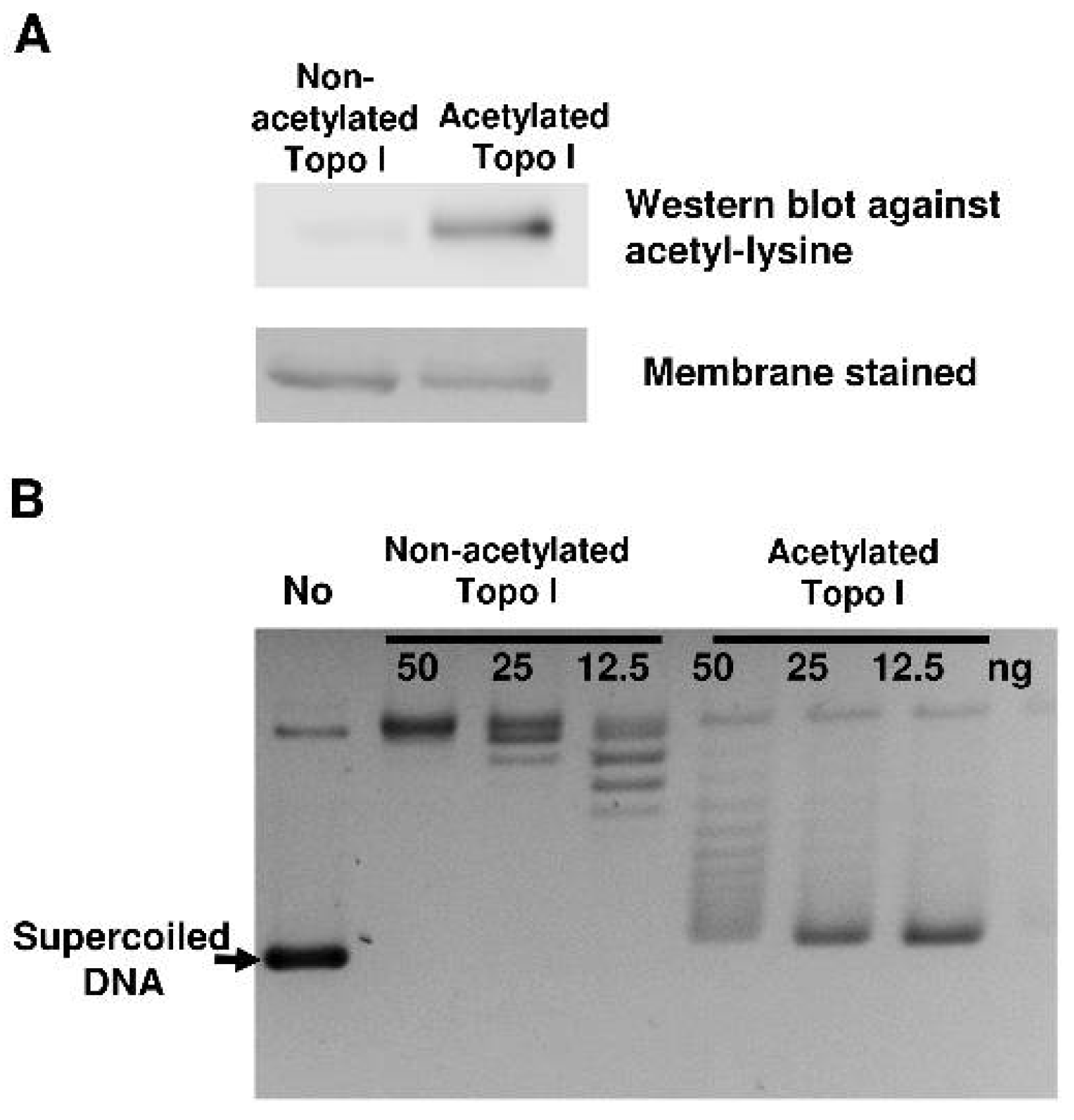 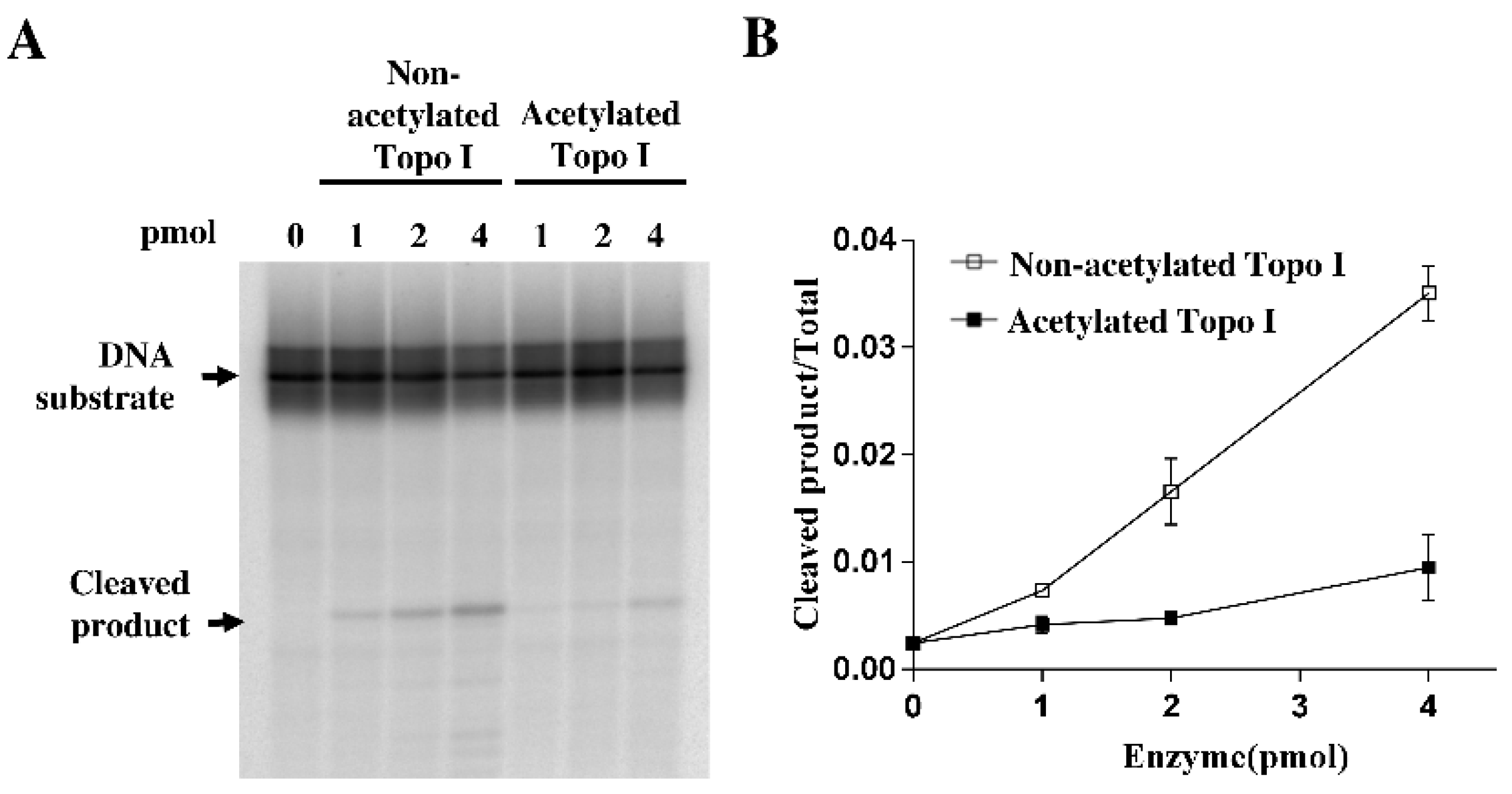 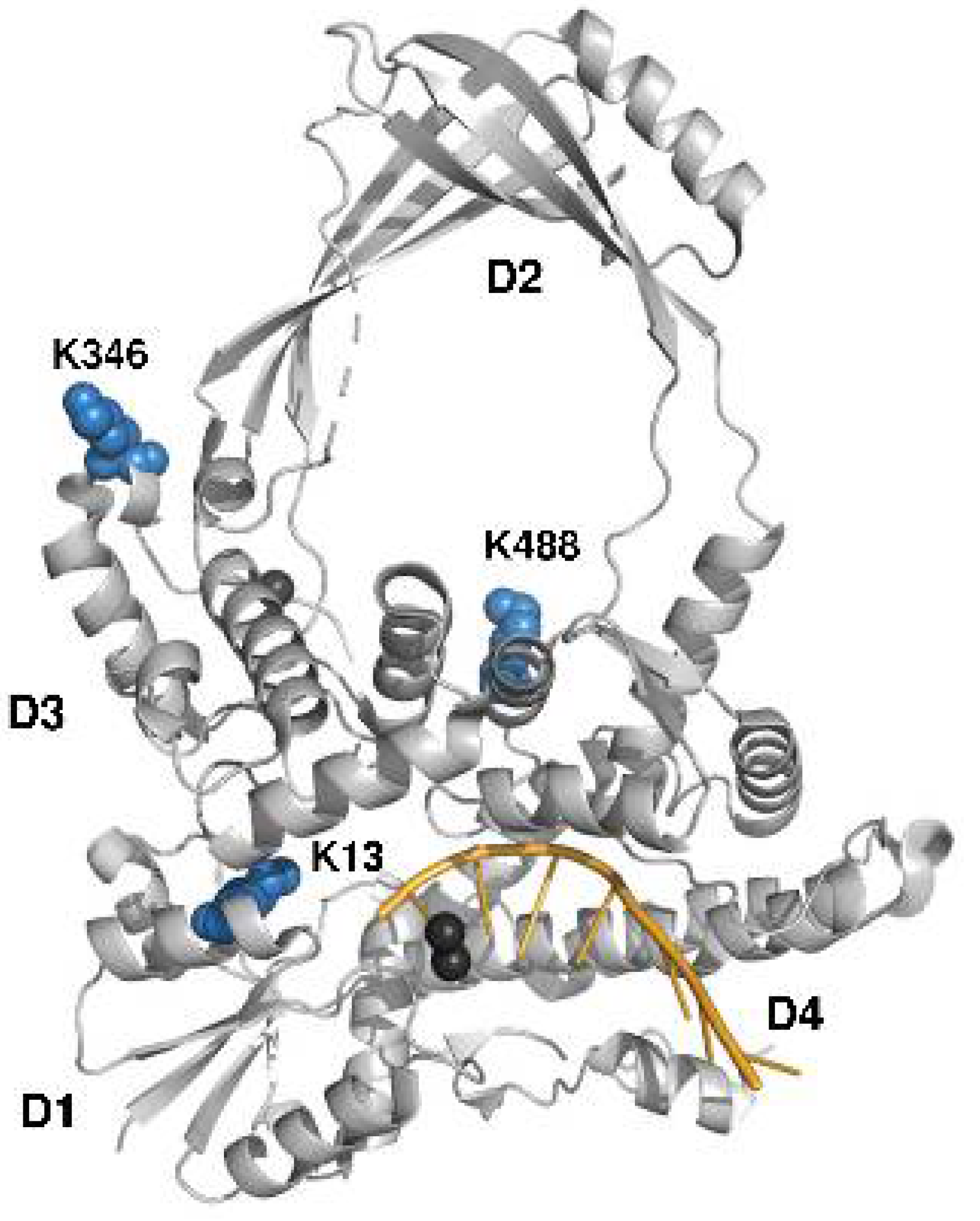