Tribute to Marcelle Grenson (1925–1996), A Pioneer in the Study of Amino Acid Transport in Yeast
Previous Article in Special Issue

The Target of Rapamycin and Mechanisms of Cell Growth

Recently, selection in pigs has been focused on improving the lean meat content in carcasses; this focus has been most evident in breeds constituting a paternal component in breeding. Such sire-breeds are used to improve the meat quantity of cross-breed pig lines. However, even in one breed, a significant variation in the meatiness level can be observed. In the present study, the comprehensive analysis of genes and microRNA expression profiles in porcine muscle tissue was applied to identify the genetic background of meat content. The comparison was performed between whole gene expression and miRNA profiles of muscle tissue collected from two sire-line pig breeds (Pietrain, Hampshire). The RNA-seq approach allowed the identification of 627 and 416 differentially expressed genes (DEGs) between pig groups differing in terms of loin weight between Pietrain and Hampshire breeds, respectively. The comparison of miRNA profiles showed differential expression of 57 microRNAs for Hampshire and 34 miRNAs for Pietrain pigs. Next, 43 genes and 18 miRNAs were selected as differentially expressed in both breeds and potentially related to muscle development. According to Gene Ontology analysis, identified DEGs and microRNAs were involved in the regulation of the cell cycle, fatty acid biosynthesis and regulation of the actin cytoskeleton. The most deregulated pathways dependent on muscle mass were the Hippo signalling pathway connected with the TGF-β signalling pathway and controlling organ size via the regulation of ubiquitin-mediated proteolysis, cell proliferation and apoptosis. The identified target genes were also involved in pathways such as the FoxO signalling pathway, signalling pathways regulating pluripotency of stem cells and the PI3K-Akt signalling pathway. The obtained results indicate molecular mechanisms controlling porcine muscle growth and development. Identified genes (SOX2, SIRT1, KLF4, PAX6 and genes belonging to the transforming growth factor beta superfamily) could be considered candidate genes for determining muscle mass in pigs. View Full-Text
Keywords: RNA-seq; miRNA; pig; next-generation sequencing (NGS); transcript analysis; muscle RNA-seq; miRNA; pig; next-generation sequencing (NGS); transcript analysis; muscle
►▼ Show Figures 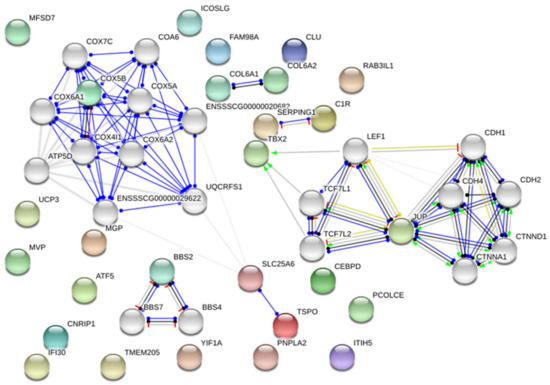