Cystatins have been largely used for pest control against phytophagous species. However, cystatins have not been commonly overexpressed in its cognate plant species to test their pesticide capacity. Since the inhibitory role of barley HvCPI-6 cystatin against the phytophagous mite Tetranychus urticae has been previously demonstrated, the purpose of our study was to determine if barley transgenic lines overexpressing its own HvIcy6 gene were more resistant against this phytophagous infestation. Besides, a transcriptomic analysis was done to find differential expressed genes among wild-type and transformed barley plants. Barley plants overexpressing HvIcy6 cystatin gene remained less susceptible to T. urticae attack when compared to wild-type plants, with a significant lesser foliar damaged area and a lower presence of the mite. Transcriptomic analysis revealed a certain reprogramming of cellular metabolism and a lower expression of several genes related to photosynthetic activity. Therefore, although caution should be taken to discard potential deleterious pleiotropic effects, cystatins may be used as transgenes with impact on agricultural crops by conferring enhanced levels of resistance to phytophagous pests. View Full-Text
Keywords: barley; cystatin; plant defense; transcriptomics; transgenic; Tetranychus urticae barley; cystatin; plant defense; transcriptomics; transgenic; Tetranychus urticae
►▼ Show Figures 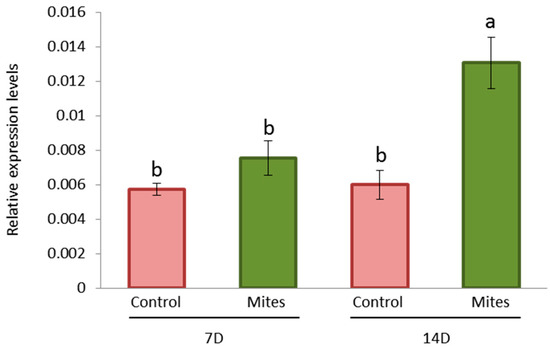