Cannabinoid Receptors and the Endocannabinoid System: Signaling and Function in the Central Nervous System
Previous Article in Journal

Background: Parkinson’s disease (PD) is typically characterized by impairment of motor function. Gait disturbances similar to those observed in patients with PD can be observed in animals after injection of neurotoxin 6-hydroxydopamine (6-OHDA) to induce unilateral nigrostriatal dopamine depletion. Exercise has been shown to be a promising non-pharmacological approach to reduce the risk of neurodegenerative disease. Methods: In this study, we investigated the long-term effects of voluntary running wheel exercise on gait phenotypes, depression, cognitive, rotational behaviors as well as histology in a 6-OHDA-lesioned rat model of PD. Results: We observed that, when compared with the non-exercise controls, five-week voluntary exercise alleviated and postponed the 6-OHDA-induced gait deficits, including a significantly improved walking speed, step/stride length, base of support and print length. In addition, we found that the non-motor functions, such as novel object recognition and forced swim test, were also ameliorated by voluntary exercise. However, the rotational behavior of the exercise group did not show significant differences when compared with the non-exercise group. Conclusions: We first analyzed the detailed spatiotemporal changes of gait pattern to investigate the potential benefits after long-term exercise in the rat model of PD, which could be useful for future objective assessment of locomotor function in PD or other neurological animal models. Furthermore, these results suggest that short-term voluntary exercise is sufficient to alleviate cognition deficits and depressive behavior in 6-OHDA lesioned rats and long-term treatment reduces the progression of motor symptoms and elevates tyrosine hydroxylase (TH), Brain-derived neurotrophic factor (BDNF), bone marrow tyrosine kinase in chromosome X (BMX) protein expression level without affecting dopaminergic (DA) neuron loss in this PD rat model. View Full-Text
Keywords: voluntary physical exercise; Parkinson’s disease; 6-hydroxydopamine; neuroprotection voluntary physical exercise; Parkinson’s disease; 6-hydroxydopamine; neuroprotection
►▼ Show Figures 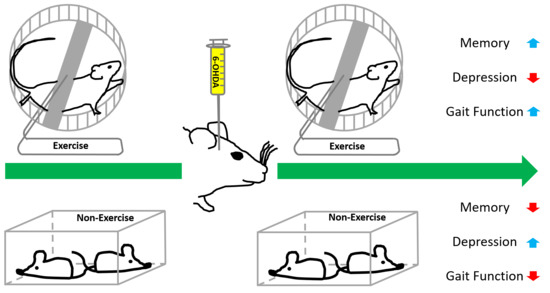