Bacillus subtilis ATCC (American type culture collection) 6633 was found to biotransform ganoderic acid A (GAA), which is a major lanostane triterpenoid from the medicinal fungus Ganoderma lucidum. Five glycosyltransferase family 1 (GT1) genes of this bacterium, including two uridine diphosphate-dependent glycosyltransferase (UGT) genes, BsUGT398 and BsUGT489, were cloned and overexpressed in Escherichia coli. Ultra-performance liquid chromatography confirmed the two purified UGT proteins biotransform ganoderic acid A into a metabolite, while the other three purified GT1 proteins cannot biotransform GAA. The optimal enzyme activities of BsUGT398 and BsUGT489 were at pH 8.0 with 10 mM of magnesium or calcium ion. In addition, no candidates showed biotransformation activity toward antcin K, which is a major ergostane triterpenoid from the fruiting bodies of Antrodia cinnamomea. One biotransformed metabolite from each BsUGT enzyme was then isolated with preparative high-performance liquid chromatography. The isolated metabolite from each BsUGT was identified as ganoderic acid A-15-O-β-glucoside by mass and nuclear magnetic resonance spectroscopy. The two BsUGTs in the present study are the first identified enzymes that catalyze the 15-O-glycosylation of triterpenoids. View Full-Text
Keywords: ganoderic acid; Bacillus subtilis; biotransformation; UDP-glycosyltransferase ganoderic acid; Bacillus subtilis; biotransformation; UDP-glycosyltransferase
►▼ Show Figures 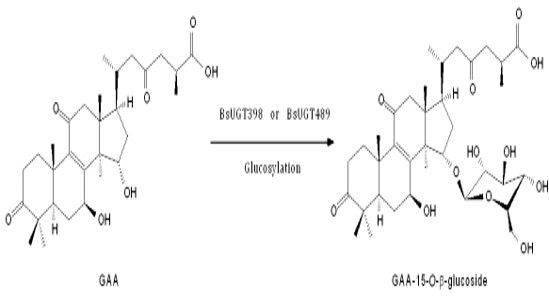