The Anticancer Properties of Cordycepin and Their Underlying Mechanisms

Inonotus obliquus is an edible mushroom and also a remedy against various diseases, especially metabolic syndrome. In this paper we report the actions of an ethanol extract of I. obliquus (IOE) against hyperuricemia in hyperuricemic mice, and the screen of bioactives. The extract (IOE) was prepared by extracting I. obliquus at 65 °C with ethanol, and characterized by HPLC. IOE at low, middle, and high doses reduced serum uric acid (SUA) of hyperuricemic mice (353 μmol/L) to 215, 174, and 152 μmol/L (p < 0.01), respectively, showing similar hypouricemic effectiveness to the positive controls. IOE showed a non-toxic impact on kidney and liver functions. Of note, IOE suppressed xanthine oxidase (XOD) activity in serum and liver, and also down-regulated renal uric acid transporter 1 (URAT1). Four compounds hit highly against XOD in molecular docking. Overall, the four compounds all occupied the active tunnel, which may inhibit the substrate from entering. The IC50 of betulin was assayed at 121.10 ± 4.57 μM, which was near to that of allopurinol (148.10 ± 5.27 μM). Betulin may be one of the anti-hyperuricemia bioactives in I. obliquus.
Keywords: Inonotus obliquus; hyperuricemia; xanthine oxidase; uric acid transporter 1; betulin Inonotus obliquus; hyperuricemia; xanthine oxidase; uric acid transporter 1; betulin

Inonotus obliquus belongs to the Hymenochaetaceae family and is a white-rot fungus parasitizing on birches throughout Eurasia [1]. It is an edible mushroom, and also a traditional remedy used for curing various diseases since the 12th century, such as cerebrovascular diseases, diabetes, and gastrointestinal diseases [2]. Modernly, it was verified that it was effective against hyperglycemia [3], cancer [4], inflammation [5], and especially regulation of metabolism [1]. Bioactives, such as triterpenes, polysaccharides, polyphenols, and melanin, have been isolated and characterized in I. obliquus, and are responsible for antitumor activities [6,7,8], anti-inflammatory ability [5], antioxidant effects [9], hypoglycemic ability [3], immunomodulatory activity [10], and antimutagenic properties [11]. Additionally, its hypouricemic effects were mentioned simply [12].
However, its bioactive constituents and mechanisms against hyperuricemia were not involved. In this paper, we report the preparation of an ethanol extract of I. obliquus (IOE), and the investigation of its effects and mechanisms against hyperuricemia in hyperuricemic mice. To understand its mechanisms, xanthine oxidase (XOD) activity, renal organic anion transporter 1 (OAT1), glucose transporter 9 (GLUT9), uric acid transporter 1 (URAT1), and gastrointestinal concentrate nucleoside transporter 2 (CNT2) were examined by RT-PCR and western blot. Additionally, its impacts on internal organs were recorded to evaluate the general toxicity. Computational screening was performed by exploiting our in-house compound database of I. obliquus to pick the bioactives. Obtained compounds were assayed to confirm their inhibitory effects on xanthine oxidase (XOD) in vivo.

The serum uric acid (SUA) of the hyperuricemic control (353 μmol/L) was elevated dramatically from that of normal mice (normal control, 197 μmol/L, p < 0.01), suggesting the success of the established model (Figure 1a). As expected, the two positive drug controls, allopurinol and benzbromarone, decreased SUA of hyperuricemic mice to 184 and 191 μmol/L (p < 0.01), respectively. Notably, IOE at low, middle, and high doses reduced SUA to 215, 174, and 152 μmol/L (p < 0.01), respectively, showing clear hypouricemic action.
Since SUA is associated directly to urine uric acid (UUA), UUA was recorded (Figure 1b). UUA of the hyperuricemic control was elevated to 322 μmol/L from the normal control (152 μmol/L, p < 0.01). UUA of IOE at various doses was decreased to 132, 143, and 125 μmol/L (p < 0.01). The hypouricemic effect of IOE may not be raised from elevating uric acid excretion.
Blood urea nitrogen (BUN) was also recorded as it is an important index for renal function. Apparently, allopurinol (14.48 mmol/L) depicted a higher BUN than the normal (7.09 mmol/L) and hyperuricemic (7.02 mmol/L) controls (p < 0.01, Figure 1c). However, IOE (7.32, 6.86, and 5.04 mmol/L for three doses) showed no increasing effect on BUN. Blood creatinine was also assayed (Figure 1d), and was used as a supplementary index for renal function. Being consistent with the blood BUN result, blood creatinine for allopurinol (64 μmol/L) was higher than the normal (52 μmol/L) and hyperuricemic (54 μmol/L) controls (p < 0.01 and 0.05). However, IOE at various doses showed blood creatinine at 50, 52, and 50 μmol/L, which was close to the normal control. According to the blood BUN and creatinine results, IOE demonstrated little-to-no toxic impact on renal function.
To illustrate the mechanisms of IOE preventing hyperuricemia, hepatic and serum XOD activities were assayed, because XOD plays a key role in SUA production (Figure 2). For the hyperuricemic control, XOD activity was enhanced to 50.28 and 16.30 U/L (p < 0.05) in liver and serum, respectively, in comparison with the normal control in liver (41.76 U/L) and serum (14.10 U/L); the amounts for the intake of hypoxanthine (HX) for the model establishment. Allopurinol, as a marketed XOD inhibitor, reduced XOD activity significantly to 31.43 U/L in liver and 14.18 U/L in serum (p < 0.01). Similar to allopurinol, IOE at three doses decreased XOD activity from the hyperuricemic control to 41.50, 39.56, and 37.16 U/L in liver, and 14.65, 12.50, and 10.47 U/L in serum (p < 0.05 or 0.01), suggesting XOD inhibition may be one of the mechanisms of I. obliquus’ hypouricemic effects.
In order to examine the effects of IOE on the key renal transporters for hyperuricemia, three transporters were assayed by Western blot analysis (Figure 3). However, IOE demonstrated some down-regulations on OAT1. In addition, IOE did not suppress GLUT9. Thus, IOE’s hypouricemic effect was not attributed to its regulations of OAT1 and GLUT9. However, URAT1 were suppressed by IOE in comparison with the hyperuricemic control (p < 0.05 or 0.01), suggesting URAT1 suppression may be one of the mechanisms of IOE’s hypouricemic effect.
Since purine absorption was performed in the gastrointestinal tract, the CNT2 lining of it was analyzed (Figure 4), which played a central role in purine absorption. Obviously, CNT2 was enhanced by middle and high doses of IOE. IOE’s hypouricemic effect was not due to its regulation of CNT2.
Body weights and inner organ coefficients were recorded to illustrate the general toxicity of IOE (Figure 5). Apparently, the positive control drug allopurinol inhibited normal body weight growth (p < 0.01) of hyperuricemic mice. This negative action was not caught by IOE at various doses. For liver and spleen coefficients, no significant difference was noted between IOE groups and normal groups. However, the kidney coefficient of allopurinol was higher than others (p < 0.01).
In order to identify the potential compounds in I. obliquus that work against hyperuricemia, we selected XOD (PDBID: 1FIQ) as the target to screen the in-house database of I. obliquus built by us. As depicted in Figure 6, four compounds were highly hit. Overall, the four compounds all occupied the active tunnel for substrate entering of XOD, which may inhibit the substrate from entering. Of the four, 3β-hydroxylanosta-7,9(11),24-trien-21-oic acid had the highest Gold score of 6.27 (Figure 6a). It formed a hydrogen bond with SER876 via the oxygen atom of a carboxyl group attached on the aliphatic moiety. Inonotusic acid was ranked second, with a Gold score of 5.40 (Figure 6b). It also bonded with SER876 through a hydrogen bond via the oxygen atom of a carbonyl group attached on the middle cyclic moiety of the tri-cyclic molecule. No polar interaction was observed for trametenolic acid (Gold score: 3.42; Figure 6c). Betulin had the fourth rank with a Gold score of 3.08 (Figure 6d). It interacted with the XOD target through a hydrogen bond to LEU648 via a hydrogen atom of a hydroxyl group attached to the penta-cyclic ring of the molecule.
To verify the hypouricemic effects of the compounds screened in vitro, we performed XOD inhibition assaying using betulin due to its high ranking and availability in our group, and allopurinol as a positive control. As shown in Figure 7, the activity of XOD was inhibited by botulin in a concentration-dependent manner. The IC50 of betulin (121.10 ± 4.57 μM) is lower than allopurinol (148.10 ± 5.27 μM). The results indicated that betulin had the ability to inhibit XOD, and it may be an anti-hyperuricemia bioactive compound.

SPF Kunming mice (male) with a weight of 20 ± 2 g were supplied by the Guangdong Provincial Medical Laboratory Animal Centre (Guangzhou, China). The animal experiment was verified and performed by and in the Guangdong Institute of Microbiology (approved ID: GT-IACUC20170721-1; Guangzhou, China). Specifically, after adapting for 7 days, animals were separated (n = 10) into normal, hyperuricemia, allopurinol, and benzbromarone controls, and drug groups with IOE, where allopurinol (5 mg/kg) and benzbromarone (7.8 mg/kg) served as positive controls, and IOE (30, 60, 120mg/kg) as drug groups. The protocol reported by us [13] was utilized to establish models for all groups except the normal control. Specifically, HX (500 mg/kg) and PO (100 mg/kg) were given to enhance serum uric acid (SUA). The administration of the drugs allopurinol (5 mg/kg), benzbromarone (7.8 mg/kg), and IOE at 30, 60, and 120 mg/kg, was conducted at 1 h after the model establishment.

4.4. In vivo XOD Activity, and Renal and Gastrointestinal Tract Transporters

The in vivo XOD activity of liver and blood was assayed using the ELISA Kit described above (R&D System Inc., Minneapolis, MN, USA) according to the manufacturer’s instructions, with the liver and blood samples collected from mice after the animal experiment. Hyperuricemia correlated key transporters, such as renal transporters (OAT1, GLUT9, and URAT1) and gastrointestinal transporters (CNT2), were assayed by Western blot to examine their mechanisms against hyperuricemia with antibodies described previously [14].

A chemical information database including 52 compounds (Figure S3) isolated from I. obliquus was established by retrieving data from Internet search engines, such as the Chemical Abstracts Service (CAS) database, Web of Science, and ChemSpider. They were then energy minimized using CHARMm force fields, and thereafter exploited as ligands. XOD structure (PDBID: 1FIQ) [15] was downloaded from the RCSB database, which was used frequently for XOD inhibitor screening. The active pocket was defined as a sphere of 10 Å in diameter, which located salicylic acid as the center. Molecular docking was performed using Gold software [16] and the top poses were picked.

4.6. Confirming the Anti-Hyperuricemic Effects of Screened Compounds by In Vitro Inhibitory Experiments

The inhibition of screened compounds on the formation of uric acid was measured using xanthine as the substrate on a ShimadzuUV-2450 spectrophotometer (Shimadzu, Japan) equipped with a 1.0 cm path length cell. A series of 2.0 mL reaction mixtures consisting of various amounts of screened compounds and a fixed concentration of XOD (7.5 × 10−8 mol L−1) were prepared by solving and mixing with PBS (phosphate buffer saline, pH = 7.4), and incubated for 0.5 h at 37 °C. Then the reaction was started by adding substrate xanthine (final concentration 5.0 × 10−5 mol L−1), and the XOD activity was assayed spectrophotometrically by monitoring uric acid production at a wavelength of 290 nm [17]. The inhibition (%) = 100% × [1 − (slope of reaction kinetics equation obtained by reaction with inhibitor)/(slope of reaction kinetics equation obtained by reaction without inhibitor)]. PBS and allopurinol were used as negative and positive controls, respectively. 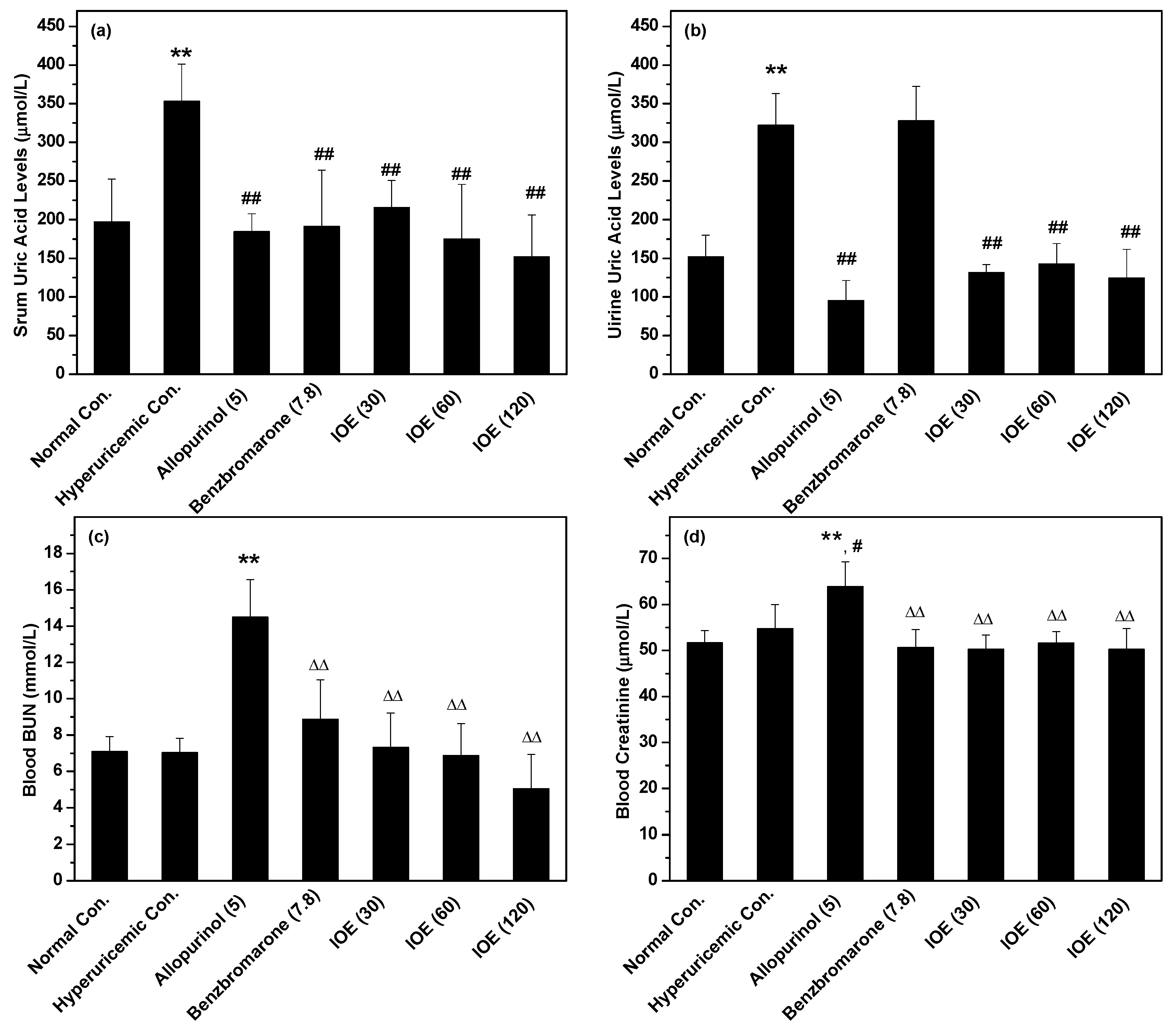 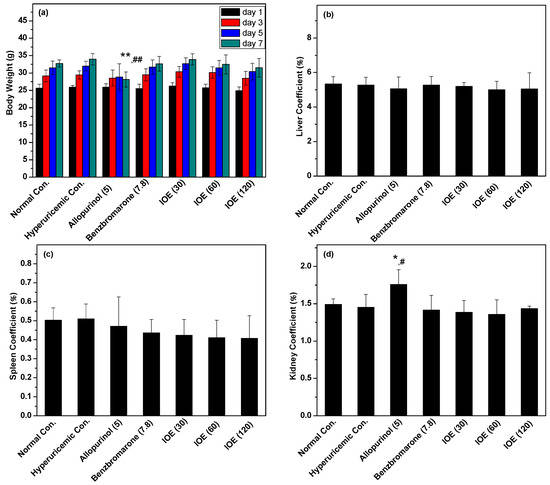 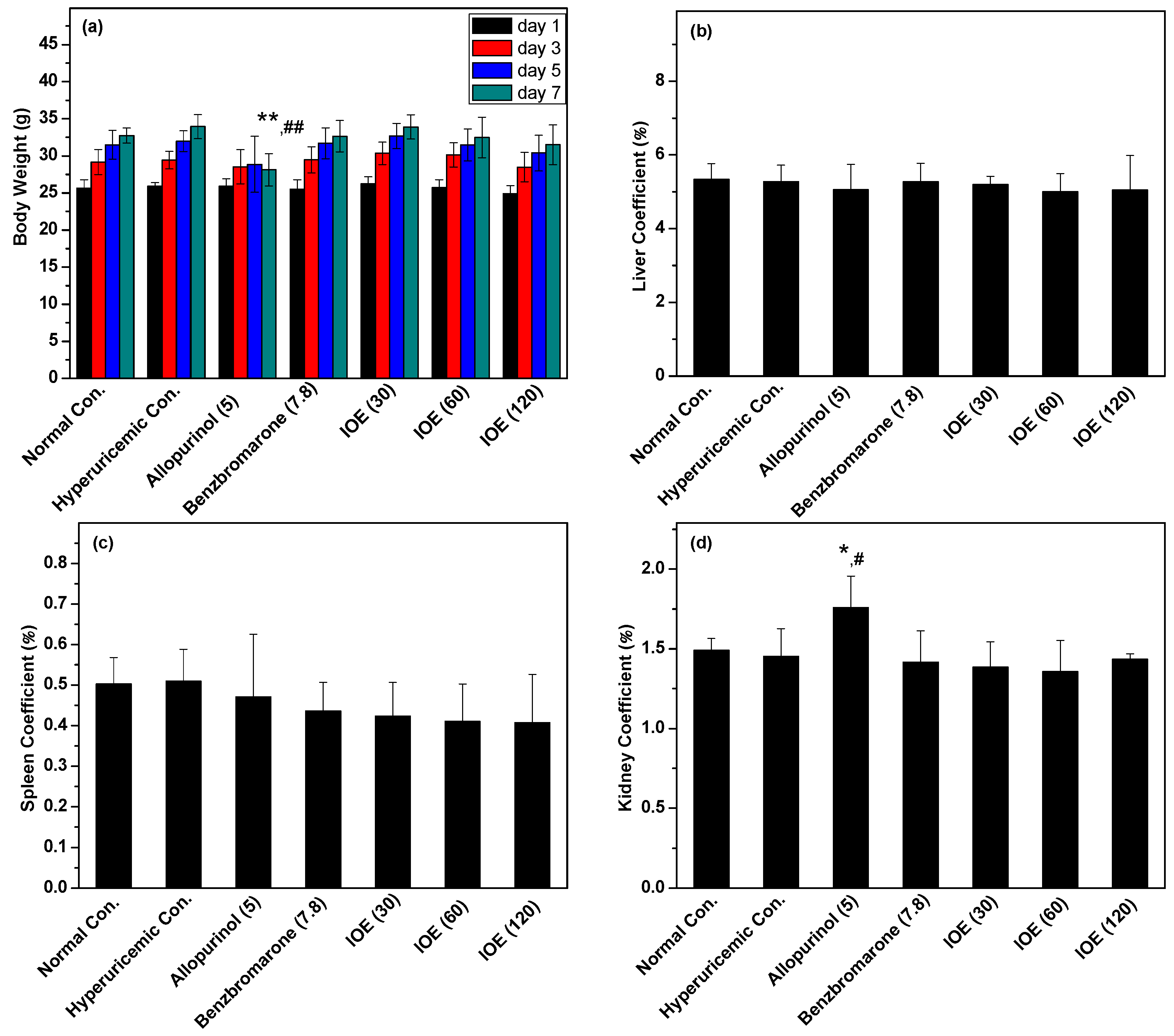 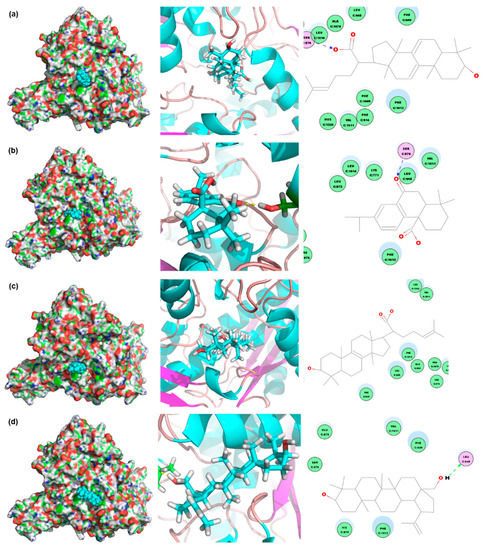 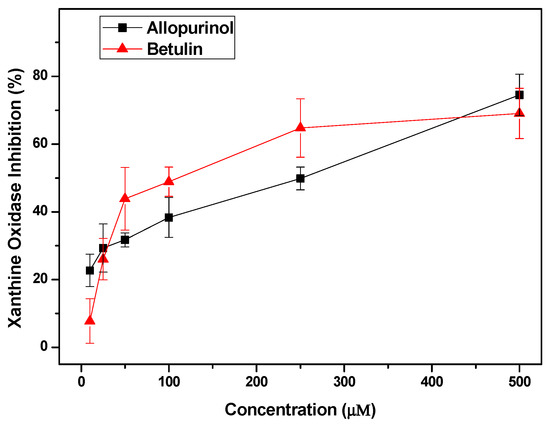 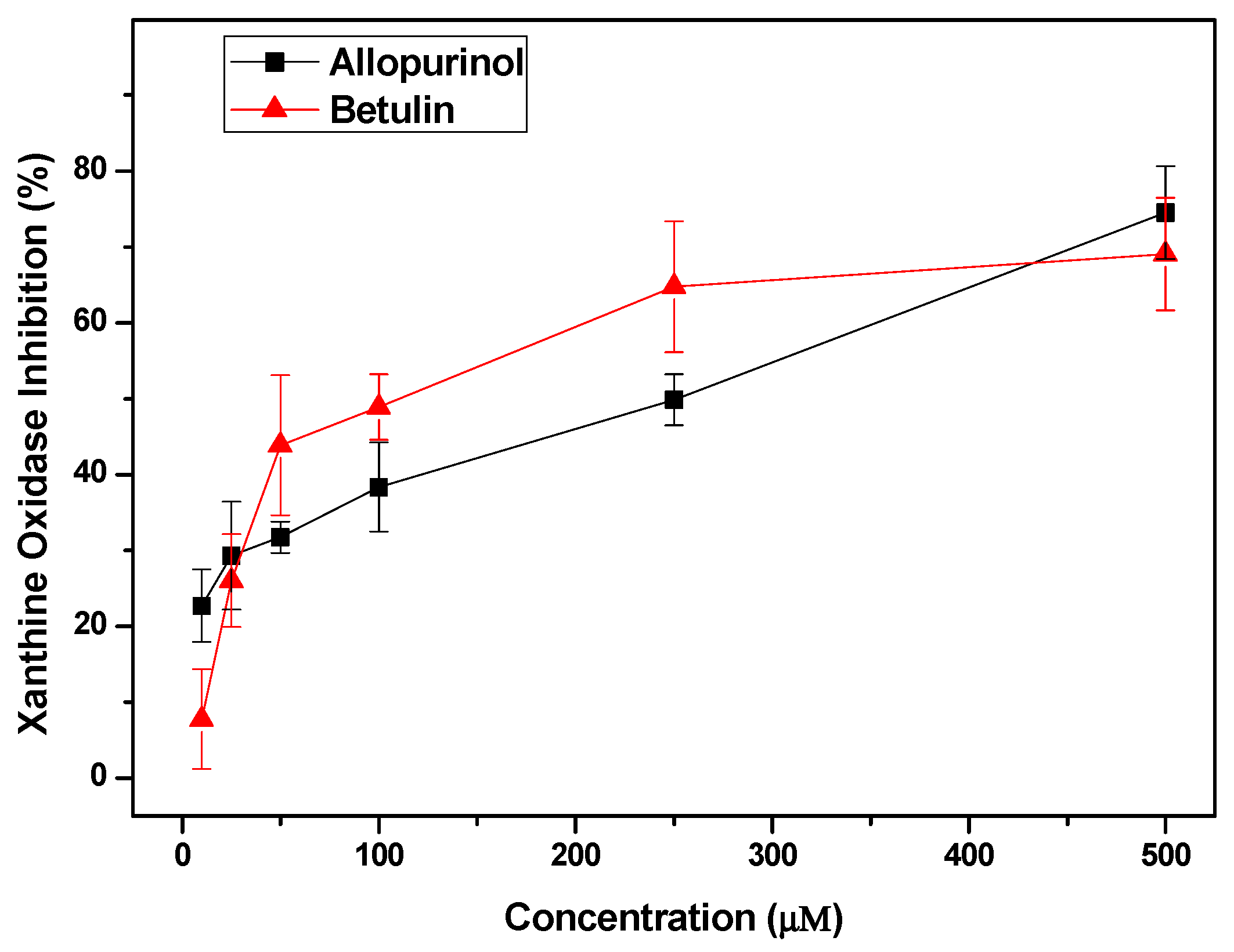