Low availability of inorganic phosphate (Pi), together with aluminum (Al), is a major constraint for plant growth and development in acidic soils. To investigate whether or not Al-resistant cultivars can perform better under Pi deficiency, we chose two wheat cultivars with different Al-responses—Atlas 66, being Al-tolerant, and Scout 66, which is Al-sensitive—and analyzed their responses to Pi deficiency. Results showed that, unexpectedly, the Al-sensitive cultivar Scout 66 contained comparatively higher amount of soluble phosphate (Pi) and total phosphorus (P) both in the roots and in the shoots than Atlas 66 under P deficiency. In addition, Scout 66 exhibited higher root biomass, root volume, and root tip numbers, compared with Atlas 66. The expression of Pi-responsive marker genes, TaIPS1, TaSPX3, and TaSQD2 was strongly induced in both cultivars, but the extents of induction were higher in Scout 66 than in Atlas 66 under long-term Pi starvation. Taken together, our results suggest that the Al-sensitive cultivar Scout 66 performed much better under sole Pi starvation, which sets the following experimental stage to uncover the underlying mechanisms of why Scout 66 can display better under Pi deficiency. Our study also raises an open question whether Al-resistant plants are more sensitive to Pi deficiency.
Keywords: phosphate deficiency; wheat; Al-tolerance; gene expression phosphate deficiency; wheat; Al-tolerance; gene expression

Phosphorus (P) is an essential macronutrient for the growth and development in plants. The total P is naturally abundant in soil; however, the plant available P, inorganic phosphate (Pi), is always beyond the demand of growth in natural and agricultural ecosystem, especially in acidic and calcareous soils. The low bio-availability of P is due to the rapid transformation of Pi into organic P and the formation of insoluble Pi complexes with soil cations, such as aluminum (Al) and iron (Fe) or calcium and manganese under acidic or alkaline soils, respectively [1,2]. A large amount of P-fertilizers over the crop’s demand therefore are normally supplied to maintain or increase the crop yields, which results in the future non-renewable P source scarcity and severe environmental concerns due to the run-off of excess Pi [3,4,5]. Therefore, it is clear that excess use of P-fertilizers is neither sustainable nor environmental friendly. Hence, to understand how plants respond to P deficiency and translate the gained knowledge to improve P-acquisition and P-use efficiency is a major approach to maintain food security and reduce environmental damage.
To cope with low Pi stress, plants have evolved an array of adaptive processes to improve Pi uptake and remobilization when the external Pi pool is limited. Such responses include morphological and physiological changes, as well as biochemical and molecular regulation [6,7,8,9,10,11]. The morphological changes include the increase of root length in monocot [12], an increase of root biomass and root-shoot ratio, and the final alteration of root system architecture [13,14]. Biochemical adaptations comprise the increased excretion of organic acids and increased secretion of Pi-releasing enzymes, such as RNases and purple acid phosphatases, providing the roots a larger rhizospheric Pi pool for uptake [15,16,17]. Along with the increased Pi pools, the expression and activity of high-affinity Pi-transporters, controlling the influx of extracellular Pi, are induced [2]. Besides Pi-transporter, omics approaches have revealed that more than 1000 genes and hundreds of proteins are regulated by Pi [2,11,18]. Some major controllers, such as PHR1, SPX1, SPX3, SIZ1 and so on from Arabidopsis thaliana and homologies from rice and other species have been documented to play central roles in the regulation of gene activity [19,20,21,22,23,24,25,26,27,28,29,30,31,32,33,34,35]. The sensor for Pi until recent was reported [36].
While the Pi deficiency responses have been expansively documented in the model plant Arabidopsis, limited information is available of the responses to Pi deficiency in agronomically important crops, such as wheat [6]. Wheat is one of the major staple food crops in the world in terms of both the cultivation area and the consumption and prevalence as a food source. A quite lot of wheat cultivation area is in the tropical and subtropical regions, with the arable soils in these regions being acidic with low P level, which is a major limiting factor for wheat production. It is estimated that ~40% of the potentially arable lands are acidic in the world. In Acidic soils, with the decrease of pH below 5, non-toxic Al is solubilized into Al ion, a form of extremely toxic to plant growth [37]. Meanwhile, with the release of ions of Al and Fe, most Pi become insoluble complexes with these cations. Thus, Al toxicity (and possible Fe toxicity) and Pi deficiency occur simultaneously in acidic soils [37,38,39], both of which cause severe losses of wheat yields. It is therefore becoming urgent to find a solution to develop Pi-efficient wheat cultivars for sustainable wheat production [6].
The two wheat cultivars Atlas 66 and Scout 66 are well known for their contrasting behavior in Al toxicity conditions (Atlas 66 is Al-tolerant, while Scout 66 is Al-sensitive) and have been extensively studied regarding Al responses [40,41]. In this study, the responses of these two cultivars to sole Pi deficiency were observed and results showed that Scout 66 performed much better under sole Pi starvation than Atlas 66. This study raises two open questions for future attempts: (1) Whether Al-resistant plants are more sensitive to Pi deficiency; (2) how plants balance the responses to different stresses simultaneously.

2.6. The Molecular Responses of the Two Cultivars under Phosphate Deficiency

Wheat (Tritium aestivum L.) seeds were surface sterilized with 10% (v/v) H2O2 for 30 min and rinsed five times with distilled water, and then soaked in distilled water for another two hours (h). The seeds were germinated in a petri dish with filter paper saturated with distilled water in darkness at 26 °C for 3 days. Followed by, the seedlings with similar size were transferred into a plastic box containing 7.5 L Modified Hoagland solution (1/4th strength) for about 3 weeks until the third leaves were fully developed. Next, half of the wheat plants were treated with nutrient solution without P (0 µM Pi, −Pi) and the rest of the wheat plants were remained in the nutrient solution with sufficient P (250 µM Pi, +Pi). The Modified Hoagland solution (1/4th strength) was described as follows: Ca(NO3)2·4H2O (2 mM), MgSO4·7H2O (650 μM), KH2PO4 (250 μM), K2SO4 (750 μM), MnSO4·H2O (10 μM), CuSO4·5H2O(0.1 μM), ZnSO4·7H2O (1 μM), H3BO3 (1 μM), (NH4)6MoO24·4H2O (0.05 μM), KCl (100 μM), Fe-EDTA (40 μM). The nutrient solution without Pi was supplemented with KCl (250 µM) to make an equal K+ supply. The nutrient solution was exchanged every 3 days and the pH was adjusted to 6.0 with NaOH. All experiments were conducted in a controlled environmental condition maintained at 26 °C with 65% relative humidity. Photoperiod was adjusted to 14 h/10 h light/dark condition with a light intensity of 200 µmol photon m−2·s−1.

The samples were collected from short (6 h to 1 d), mid (1 d to 7 d) and long time periods (7 d to 21 d) under both Pi levels. To minimize the circadian effect, sample collection was performed at the same time (10 am) of the day. The roots were rinsed several times with distilled water to remove the surface ions and blotted dry with tissue papers. After measuring root and shoot length, the samples were dried at 72 °C in the oven for 60 h.
To measure root volume and tip numbers, the harvested roots were dispersed in a transparent tray with water, and then scanned with a root system scanner (EPSON Expression 1600, Seiko EPSON Corp., Nagano, Japan). The scanned images were analyzed by WinRHIZO image analysis system (WIN MAC, Regent Instruments Inc., Quebec, QC, Canada, http://www.regentinstruments.com/).

To determine the total P content, the dried root and shoot samples were digested with 2 mL H2SO4 (2 h at 150 °C and 3 h at 180 °C), thereafter H2O2 was added to make them properly digest. Total P content was determined using molybdenum blue-colorimetric method [60]. To measure soluble Pi, the root and shoot (around 50 mg, fresh weight) were homogenized with extraction buffer (10 mM Tris, 1 mM EDTA, 100 mM NaCl, 1 mM β-mercaptoethanol, and 1 mM PMSF) and the Pi concentration was subsequently determined as described in [61].

4.4. Measurement of Iron and Zinc Concentration

Root and shoot samples were harvested at 21 d time point and used to determine the iron and zinc concentration. The roots were washed with 2 mM CaSO4 for 10 min and 10 mM EDTA for another 10 min to remove the surface ions. The dried samples were digested with HNO3 (2 mL), and the Fe and Zn concentrations were determined by ICP-MS (Optima 8000 ICP-OES Spectrometer, PerkinElmer, Inc., Waltham, MA, USA).

The fresh roots and shoots were collected in the scheduled time point (for the marker gene expression analysis, 1 h and 3 h time points were included), and immediately kept in liquid nitrogen and stored at −80 °C for further analysis. For RNAs extraction, fresh tissues were grinded with a mortar and pestle and total RNAs were extracted using TRIzol reagent (Invitrogen, Karlsruhe, Germany) according to the manufacturer’s instructions. RNA concentration was determined with NanoDrops (Thermo Scientific, NanoDrop 2000 Spectrophotomer, Wilmington, DE, USA) and its integrity was verified through agarose gel electrophoresis. 1 µg of total RNA from each sample was converted into cDNAs using Prime Script reverse transcriptase (Invitrogen, Karlsruhe, Germany). Quantitative real time PCR (qRT-PCR) was applied to determine the gene expression level using the SYBR green PCR Master Mix (Takara Bio Inc., Kusatsu, Japan). The program was described as follows: Pre-denaturation at 95 °C for 30s, 40 cycles of denaturation at 95 °C for 5 s and annealing at 60 °C for 30 s, followed by melt-curve analysis (60 °C–95 °C, 0.5 °C increments for 5s). The relative expression levels of different studied genes were calculated according to the 2−ΔCt method [63]. The primers used in this study were listed in the Supplementary Table S1. The wheat TaAPT1 (Adenine phosphoribosyltransferase 1) gene was used as a house keeping gene.

All of the data presented here were mean values for each treatment. Two-way analysis of variance (ANOVA) was carried out between cultivars and p under control and treatments and followed by the least significant difference (LSD) multiple range test (p < 0.05) using SPSS version 22 statistical software (IBM Corp., Armonk, NY, USA).

In this study, two genotypes contrasting in Al-tolerance were comparatively analyzed, focusing on the morphological, physiological and molecular characteristics under Pi deficient conditions. It was concluded that the Al-sensitive cultivar, Scout 66, exhibited better performance under Pi deficient conditions compared to Atlas 66. With the common wheat genome sequencing completed and more genome information available, it provides us more chance to uncover the molecular mechanism by which Scout 66 performs better under Pi deficiency than Atlas 66 in the near future. Combined the Al—tolerance related genes with the Pi-efficiency genes, it is possible to develop Pi-efficiency wheat cultivars that have good fitness on acidic soils.

This research was supported by the National Key R&D Program (2016YFD0200308), the National Key Basic Research Program of China (2015CB150501), the National Science Foundation in Jiangsu Provinces (BK20141511), and the Project of Priority and Key Areas, Institute of Soil Science, Chinese Academy of Sciences (ISSASIP1605 and ISSASIP1640). The authors thank Wenfeng Li for constructive comments on the manuscript. 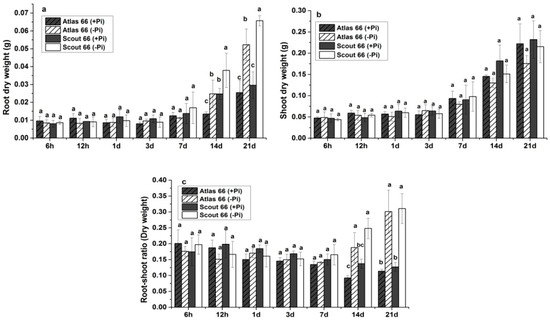 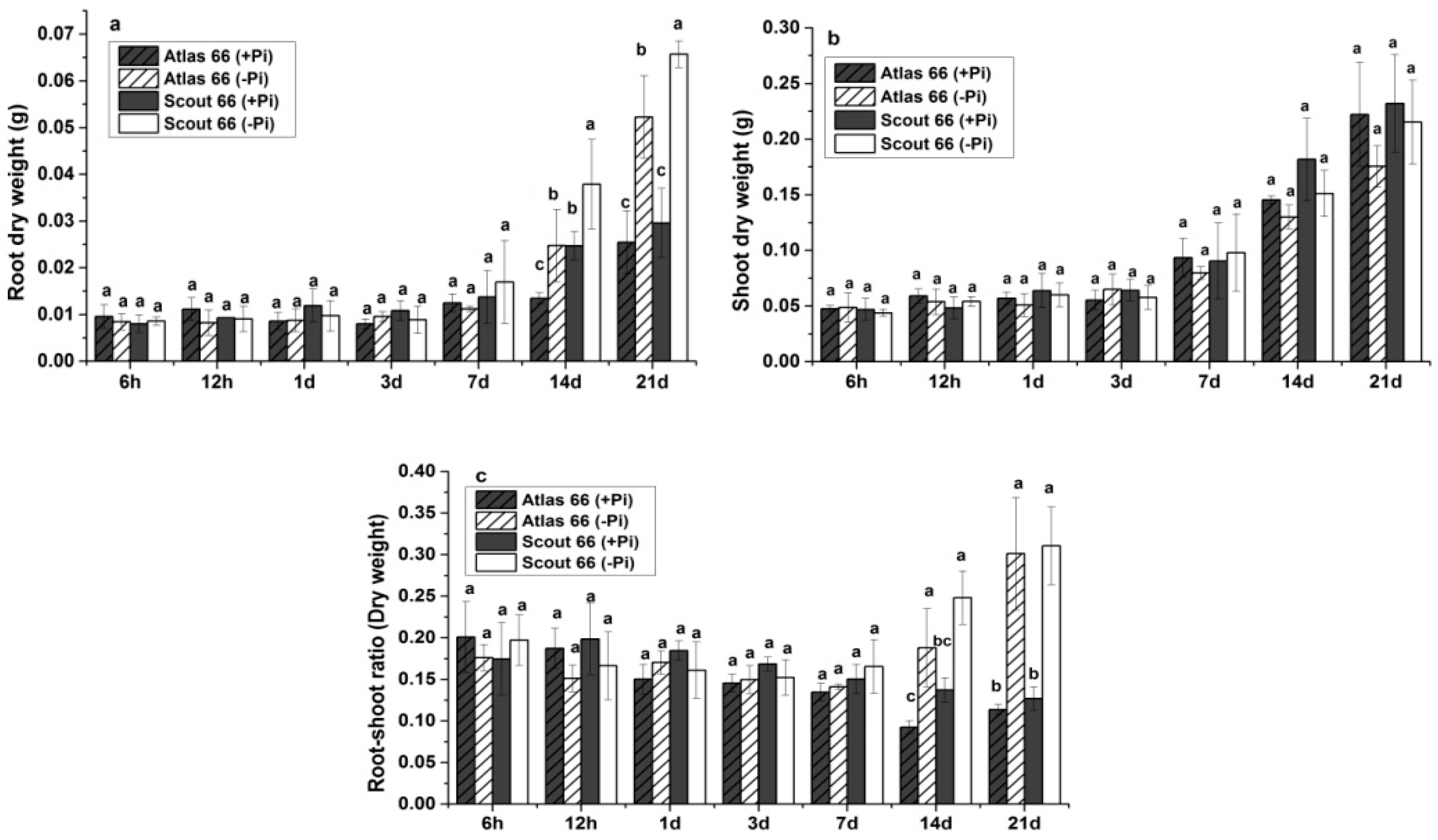